The media, Clinton and Trump 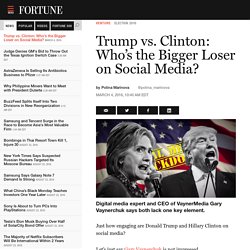 Let’s just say Gary Vaynerchuk is not impressed. Fortune sat down with the digital media expert to do a rapid-fire critique of the presidential candidates’ Facebook, Twitter and Instagram profiles. Trump vs. Clinton: Who's Winning the Social Media War? Donald Trump: I'm running against 'crooked media', not just Hillary Clinton. In search of answers about plummeting polls and reports of despair within his presidential campaign, Republican nominee Donald Trump questioned the role of a free press on Sunday, as his allies struggled to argue that their candidate remained focused on winning the general election. 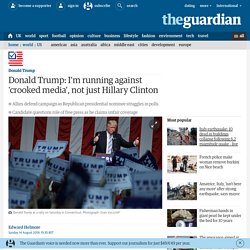 At a Saturday night rally in Fairfield, Connecticut, Trump went so far as to say that his race is not against the Democratic nominee, Hillary Clinton, but against journalists. “I’m not running against Crooked Hillary,” he told a crowd. “I’m running against the crooked media.” On Sunday, the nominee challenged the application of first amendment rights: “It is not ‘freedom of the press’ when newspapers and others are allowed to say and write whatever they want even if it is completely false!” Trump has previously argued that Congress should “open up our libel laws” so that people could sue newspapers, although he himself has cited tabloid stories without evidence. How the Liberal Media Covers Hillary Clinton vs Trump. 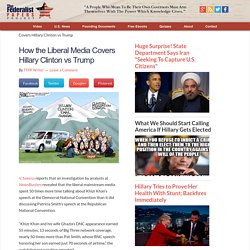 According to National Review contributor Jim Geraghty, liberals lambasted Smith’s speech as a “cynical exploitation of grief.” They also accused her of having ruined the convention, and one particularly aggrieved punk expressed his desire to beat her to death. Hypocrisy much? One Chart Exposes How The Media Bashes Hillary Clinton While Promoting Donald Trump. A single chart from a study at Harvard reveals the depth and degree of the media’s bias against Hillary Clinton and promotion of Donald Trump. 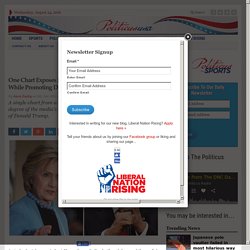 A study by Thomas E. Patterson, Bradlee Professor of Government and the Press, at Harvard University, showed that while Donald Trump received nearly universally positive coverage in the year leading up to the primaries, media coverage of Hillary Clinton was more negative than that of any other candidate. Here is a chart that every mainstream journalist should answer for: American journalism is collapsing before our eyes. Donald Trump may or may not fix his campaign, and Hillary Clinton may or may not become the first female president. 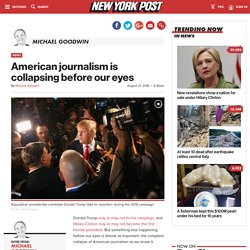 But something else happening before our eyes is almost as important: the complete collapse of American journalism as we know it. The frenzy to bury Trump is not limited to the Clinton campaign and the Obama White House. They are working hand in hand with what was considered the cream of the nation’s news organizations. The shameful display of naked partisanship by the elite media is unlike anything seen in modern America. The largest broadcast networks — CBS, NBC and ABC — and major newspapers like the New York Times and Washington Post have jettisoned all pretense of fair play. Indeed, no foreign enemy, no terror group, no native criminal gang suffers the daily beating that Trump does.

By torching its remaining credibility in service of Clinton, the mainstream media’s reputations will likely never recover, nor will the standards. I know because I was one of them. Clinton Has Nearly Caught Up To Trump In Media Coverage. Hillary Clinton has almost caught up with Donald Trump in campaign coverage on television and online, reducing a clear advantage Trump had against his opponents during the Republican primaries. 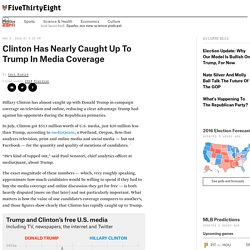 In July, Clinton got $513 million worth of U.S. media, just $20 million less than Trump, according to mediaQuant, a Portland, Oregon, firm that analyzes television, print and online media and social media — but not Facebook — for the quantity and quality of mentions of candidates. More Politics “He’s kind of topped out,” said Paul Senatori, chief analytics officer at mediaQuant, about Trump. The exact magnitude of these numbers — which, very roughly speaking, approximate how much candidates would be willing to spend if they had to buy the media coverage and online discussion they get for free — is both heavily disputed (more on that later) and not particularly important.

But all those media mentions are now baked into the poll numbers, which sharply favor Clinton. “It’s a gimmick,” Cassino said. The Media, Hillary Clinton, and Donald Trump. An article recently popped up on my Facebook feed with the headline: “8 Hollywood women who took a stand for progress and inspired us.” 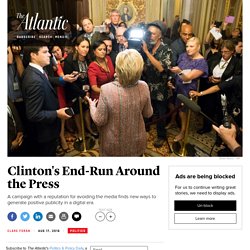 At first glance, it looked like it had come from a media outlet dedicated to viral content. In fact, it had been created by the Hillary Clinton campaign. The article features A-list celebrities like Amy Schumer and Jennifer Lawrence taking a stand on a variety of liberal causes. At the end, it reads: “We couldn’t agree more—equal rights, gun safety, racial justice and equality are all issues Hillary is fighting for.” A campaign with a reputation for keeping the media at a distance is finding new and innovative ways to generate positive publicity of its own making. Digital media makes it easy for politicians to speak directly to voters without relying on the press—and the Clinton campaign is taking full advantage of that. After spending years in the public eye, Clinton is famously wary of reporters and has a reputation for hating the media.