Vidéo du Wednesday, June 3rd. A visit of Washington DC. Summary Anna and Penelope are on a tour boat. 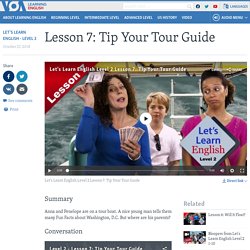 A nice young man tells them many Fun Facts about Washington, D.C. But where are his parents? Conversation Anna: Penelope, the Lincoln Memorial is coming up on your left! Boy: You’re going to love my Lincoln Memorial Fun Fact! Anna: Oh, please tell us! Boy: On a wall inside the memorial, the word “FUTURE” was carved wrong! Anna: Well, we all make mistakes. Boy: Yeah, but this mistake was carved in stone! Anna: You’re right. Penelope: More fun facts, please! Anna: Penelope, this is amazing! Penelope: Hey, we’re passing by the Pentagon on our right! 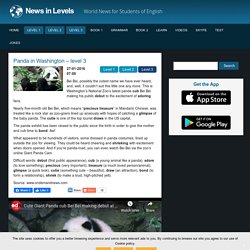 This is Washington’s National Zoo’s latest panda cub Bei Bei making his public debut to the excitement of adoring fans. Nearly five-month old Bei Bei, which means “precious treasure” in Mandarin Chinese, was treated like a rock star as zoo-goers lined up anxiously with hopes of catching a glimpse of the baby panda. The cutie is one of the top tourist draws in the US capital. The panda exhibit has been closed to the public since the birth in order to give the mother and cub time to bond. Aw! What appeared to be hundreds of visitors, some dressed in panda costumes, lined up outside the zoo for viewing. Monday, June 8th. Robinson Crusoe in Levels. After Six Days of Violent Protests, US Leaders Look for Answer.

After six days of unrest, many cities and neighborhoods across the United States face damage from violence and stealing. 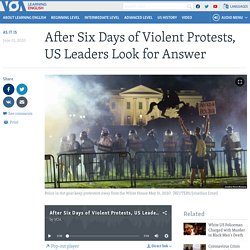 Political leaders are struggling to contain the nation-wide anger over the killing of a black man by police in Minnesota. There are curfews in some cities and National Guard troops have been deployed to keep order. But, peaceful daytime protests again have turned to violence at night. In Washington, D.C. protesters set fires, overturned cars and threw an American flag into the flames near the White House on Sunday. Police fired tear gas and stun grenades to control a crowd of more than 1,000 people across the street in Lafayette Park. Protesters threw rocks and burning bottles at police in Philadelphia as public transportation and city streets were closed. A man was killed when police and national guard soldiers returned fire after being shot at first early on Monday morning in Louisville, Kentucky. 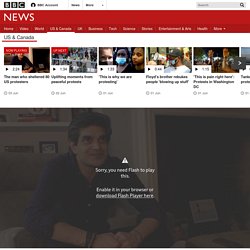 Police said they made nearly 200 arrests in the area and will review how they conducted themselves. Produced by Dhruti Shah, Rozina Sini, Helier Cheung, Rod Macleod and Tristan Cimini. 03 Jun 2020 Go to next video: Uplifting moments from peaceful protests. ‘Kettling’ police tactic controversial everywhere it was used. A police tactic called “kettling” has drawn controversy everywhere it’s been used – from London in 1990 and 2009 to Genoa, Italy in 2001. 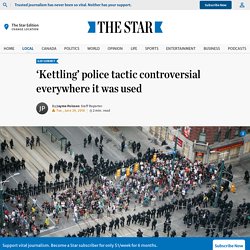 Likened to how heat and steam are contained in a kitchen kettle, police move in on a group, trapping them — sometimes for hours. Police say it leaves frustrated protesters just wanting to go home. It was used Sunday night on a group of about 200 at the intersection of Queen and Spadina Sts. Here’s how it unfolded. 5 p.m. — A march that originates at King and Bay Sts. starts moving north to Queen St. 5:45 p.m. — Protesters trying to join the main march are pushed back to Cameron St, one block west of Queen and Spadina. 6:50 p.m. — Hundreds of Toronto police officers in riot gear occupy the four sides of the intersection of Spadina and Queen, trapping about 200 people. 7 p.m. — More police arrive in vans from the west along Queen St. and begin changing into riot gear adding to the 150 police surrounding the intersection.