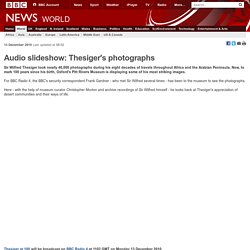 Now, to mark 100 years since his birth, Oxford's Pitt Rivers Museum is displaying some of his most striking images. For BBC Radio 4, the BBC's security correspondent Frank Gardner - who met Sir Wilfred several times - has been to the museum to see the photographs. Here - with the help of museum curator Christopher Morton and archive recordings of Sir Wilfred himself - he looks back at Thesiger's appreciation of desert communities and their ways of life. Continue reading the main story Thesiger at 100 will be broadcast on BBC Radio 4 at 1102 GMT on Monday 13 December 2010. It will then be available for seven days on the BBC iPlayer. All images copyright Pitt Rivers Museum, University of Oxford. Audio from Unique Broadcasting Company. Related: American Photography: A Century of Images. Woman confronting National Guard troops outside the Pentagon during a Vietnam war protest march, by M Riboud, 1967. Sabelo Mlangeni — nataal.com. “For eight months, I followed these women - who I think of as the mothers of the city of Johannesburg. 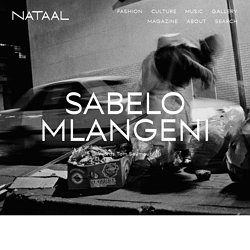 Some days I would even leave my camera at home and just clean with them. The work is about giving voice and strength to these mothers. In this way, the work is also for my own mother, whose voice is also threatened with erasure, by our Zulu culture and even our religion.” Lindsey Oliver, the founder of Africa MediaWorks and patron of the prize, says: "The Western art world has been perilously slow to realise and recognise the richness, diversity and variety of photographic artworks from across the African continent, from fashion photography to documentary to conceptual modes of practise. The artists selected for this prize are worthy of international visibility, and we hope this exhibition will help to facilitate that.” Read more about the Africa MediaWorks Photo Prize here. Ernest Cole. GOODMAN GALLERY : home. Zanele Muholi - 224 Artworks, Bio & Shows on Artsy. Peter Menzel – Photography.

The Racial Minefield he called home Ernest Cole, 1960. Lunch atop a skyscraper, 1932. Segregated water fountains Eliott Erwitt, 1950. Napalm girl. Celebrity & Regular Person Photographer. Bill Brandt Archive. Martin Parr. Tony Ray-Jones in colour. Image copyright Tony Ray Jones When considering the 1960s, there are certain photographers whose names leap out at us, the majority from the world of fashion, with the so-called holy trinity of David Bailey, Terence Donovan and Brian Duffy at the forefront. 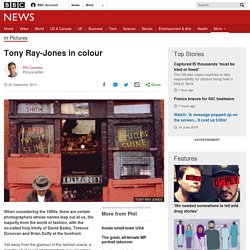 Yet away from the glamour of the fashion scene, a new breed of social photographers was emerging. And one of those was Tony Ray-Jones whose pictures helped define photography in the 1970s and beyond, despite his death from leukaemia aged 30 in 1972. From 21 September an exhibition of his work, Only in England, is on show at Media Space in London. It features more than 100 works drawn from the 2,700 contact sheets and negatives held at the National Media Museum, many of which have been selected by photographer Martin Parr. In addition to this, a selection of rarely seen colour photographs from his time spent in the US has been published by Mack, offering a glimpse into his time developing his own voice as a photographer. Mark Cohen Dark knees. Mark Neville. Who is Lorna Simpson? – Who Are They? Let's look closer Let’s look at her artwork Five Day Forecast 1991 to find out more about how she uses words with photographs. 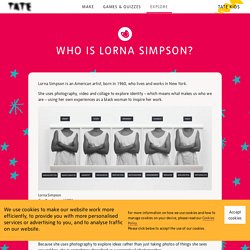 Five framed photographs show a black woman dressed in a simple white dress (similar to the simple cotton clothes worn in the past by slaves). We don’t see the woman’s face so we don’t know anything about her. However we get mixed signals. She seems vulnerable because of the starkness of the photograph, but her folded arms give her a bit of an attitude, so she also looks strong and in control. There are words above and underneath the photographs. Five Day Forecast was made at a time when Lorna Simpson was doing lots of boring office jobs while she was trying to make it as an artist. Underneath the photographs are more words, all of them beginning with ‘Mis…’ such as ‘misinformation’ and ‘misremember’.