Indian MMA has a special place in our hearts as we go above and beyond to tell the stories of the men and women in this country who have the gumption to walk into a MMA cage. 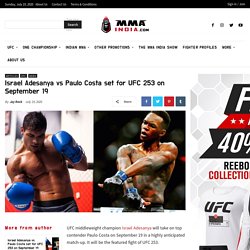 It will be the featured fight of UFC 253. The location of the fight hasn’t been revealed and it was first reported by Combate and confirmed by ESPN’s Ariel Helwani. According to MMAJunkie, the fight will take place at Yas Islands in Abu Dhabi. Paulo Costa was supposed to fight Israel Adesanya in March earlier this year. But the Brazilian had to undergo an arm surgery that forced him to remain out of the Octagon for almost eight months. This resulted in UFC matching up Israel Adesanya with Yoel Romero at UFC 248 despite the Cuban being coming off of two back to back loses.

Paulo Costa: Israel Adesanya is a fake champion In an interview with BJPenn last September, Costa has expressed his dislike for Israel Adesanya and stated that the Kiwi was a fake champion. “I can beat both. “If he beats Whittaker, which I don’t think, I’m going to kill him. “It will happen. Best News Website for Indian MMA, UFC, Boxing & Fighters. Ali Abdelaziz says Khabib vs Gaethje will take place in 2020 - MMA INDIA.

After defeating Tony Ferguson in a 25-minute violent filled battle, Justin Gaethje is set to fight for the title shot against Khabib Nurmagomedov before 2020, revealed their common manager in an interview with TMZ. 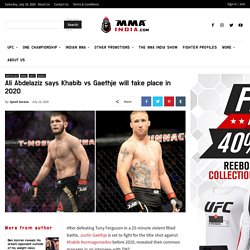 The news of the death of Nurmagomedov’s father sent shock waves through the MMA world. Everyone knew how close he was to his father Abdulmanap Nurmagomedov and could sympathize with him for his loss. The entire MMA community came together to mourn the death of the legend. His rivals like Conor McGregor and Tony Ferguson brushed their differences apart and conveyed their condolences to him and his family. The loss of a father, a coach, and a dedicated supporter of the sport. Rumors of the eagle retiring were doing the rounds. Kelvin Gastelum open to a rematch against Darren Till - MMA INDIA. 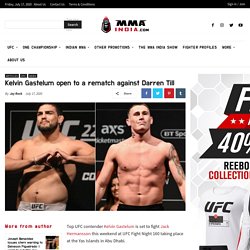 This is an important fight for Gastelum who will be looking for a win as he is currently riding on a two-fight losing streak. He last fought against Darren Till at UFC 244, which took place at the Madison Square Garden in New York City. Prior to that, he lost to current UFC middleweight champion Israel Adesanya at UFC 236, in what could be considered as one of the best fights of 2019. On the other hand, Jack Hermansson is coming off of a TKO loss to Jared Cannonier at UFC Fight Night 160 last September. Kamaru Usman reveals who he wants to fight next after defeating Jorge Masvidal at UFC 251. UFC 251 featured an interesting title bout as UFC welterweight champion Kamaru Usman defeated challenger and BMF champion Jorge Masvidal via a fairly lopsided unanimous decision. 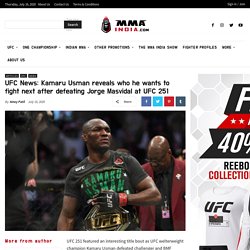 ‘The Nigerian Nightmare’ defended his welterweight strap for the second time extending his winning streak to 12. The champ has now defeated six of out the top 10 ranked welterweights including kingpins like Tyron Woodley, Colby Covington and Jorge Masvidal. However that’s obviously not enough for the champ as he looks to push his stock a notch higher. Speaking in an interview, Usman named the fighter which he would like to fight next. The man happens to be with whom he ties the record for most consecutive welterweight wins and the epitome benchmark to which every welterweight ever will be judged, former welterweight and middleweight chmampion, Georges St-Pierre.

“Honestly, I would have to say Georges St-Pierre,” Usman said. If any content is used from this article, kindly backlink to this page. Watch: Tyron Woodley falls short in the Titan Games against a teacher! - MMA India. Former UFC welterweight champion Tyron Woodley made his most anticipated appearance on Dwayne ‘The Rock’ Johnson’s ‘The Titan Games.’ 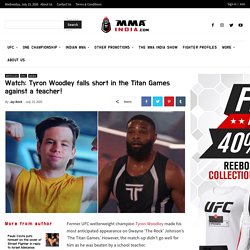 However, the match-up didn’t go well for him as he was beaten by a school teacher. After clearing the initial rounds, he faced a school teacher named Will Sutton, who hails from Trenton, New Jersey. Sutton is an agriculture teacher and JV basketball coach at Croatan High School. The pair competed in the finals which is called ‘Mount Olympus’. Daniel Cormier hints that Jorge Masvidal is a bigger draw than teammate Khabib Nurmagomedov - MMA India. Former UFC light heavyweight and heavyweight champion Daniel Cormier took to Twitter and hinted that Jorge Masvidal was a bigger star than his teammate Khabib Nurmagomedov. 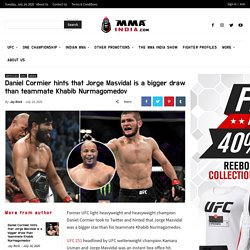 UFC 251 headlined by UFC welterweight champion Kamaru Usman and Jorge Masvidal was an instant box office hit. The PPV numbers are finally in and it has shattered all the PPV records for ESPN+. According to Mike Coppinger of The Athletic, UFC 251 sold a staggering 1.3 Million PPV buys making it the sixth highest selling PPV of all time and the most selling PPV of the ESPN+ era. This comes as a surprise even to veteran media personalities in the industry as the PPV numbers have exceeded their expectations. ESPN’s Ariel Helwani ran a poll last week, where most fans thought that it would sell only slightly upwards of 400,000 buys. 5 times short replacement fights had the MMA world in a frenzy! The early bird catches the worm as they say. 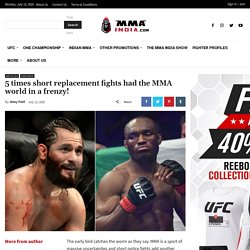 MMA is a sport of massive uncertainties and short notice fights add another interesting dynamic to it. In a sport as predictable as MMA, a fight can fell through at any given time. From injuries, medical issues and weight cut issues to even a fighter tripping off a piece of wire as it happened to Tony Ferguson. A plethora of reasons can lead to any fight been called off at any given time. You can also add a global pandemic to that list. Today we look back at five times when short replacement fights send a shock wave across the MMA community. Twitter trolls Kamaru Usman after he foot-stomped his way to win over Jorge Masvidal. UFC welterweight champion Kamaru Usman successfully defended his title by outpointing Jorge Masvidal over five round. 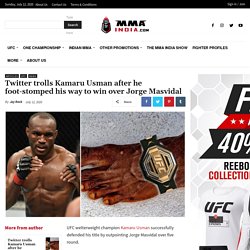 The judges scored the fight 50-45, 50-45 and 49-46 in favour of Kamaru Usman. This is Usman’s second title defence. ‘The Nigerian Nightmare’ fought to his strength and put on a wrestling clinic throughout the fight. Kamaru Usman outstruck Jorge Masvidal 94-66 in terms of significant strikes. He also scored 5 of his 16 attempted takedowns and was able to pass guards twice in the fight.

Watch: The UFC 251 Cold Open will give you goosebumps! - MMA India. UFC 251 is without a doubt one of the biggest and the most anticipated fight card of 2020. 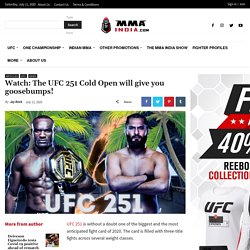 The card is filled with three-title fights across several weight classes. The first fight to feature at UFC 251 will be for the vacant bantamweight title between Petr Yan and former UFC featherweight champion Jose Aldo. The UFC bantamweight title was vacated by Henry Cejudo, who retired from the sport of MMA following his win over Dominick Cruz at UFC 249 in Jacksonville, Florida last May. UFC announces which brand will replace Reebok as outfitting partner! - MMA India. The Reebok era in the UFC is finally coming to an end. 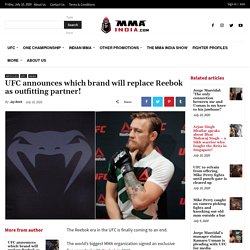 The world’s biggest MMA organization signed an exclusive five-year deal with Reebok in 2015. The deal was worth $70 Million and was very controversial amongst the fans. After UFC signed with Reebok, fighters couldn’t wear shorts made by other companies and they couldn’t even have custom sponsorship for themselves. In short, the fighters were making less because of no sponsors. The fighters could still have their own sponsors as long as they were outside the Octagon. MMA royalty Cris Cyborg tells Ritu Phogat she hopes to train together one day! - MMA India. In a short time, Ritu Phogat has become the face of Indian Mixed Martial Arts.

The sport of Mixed Martial Arts has been growing in India for quite some time now, Fighters from numerous parts of the country have fought in both international and local promotions. However, none of them has managed to capture an audience for themselves except Ritu Phogat. Phogat comes from a Wrestling royalty and her transition to MMA was a big loss to the Wrestling community. The 25-year old turned professional last year and she fought Nam Hee Kim of South Korea in her debut match. Jorge Masvidal (brutally) gives Steve-O a cauliflower ear. Jorge Masvidal has been rising as one of the biggest stars in the MMA community. His YouTube channel seems to be on the same path as well. A recent video posted on the channel shows ‘Gamebred’ meeting one of his childhood superheroes, TV and stunt performer, Steve-O. He is popularly known for his stunt performances on an American television series Jackass. Masvidal claimed to be ‘paralyzed’ to the TV screen once the show aired.

Conor McGregor hitting the heavy bag....those shots sound heavy! - MMA India. Last month former two-division world champion Conor McGregor announced his retirement from the sport for the third time on social media. The move came after Conor McGregor knocked out Donald Cerrone in just 40-seconds ending his fifteen-month layoff. McGregor had told following his UFC 246 win in January that he was going to fight three times in 2020. He told me that he was hoping to return back to the cage in July. However, his retirement has put everything on hold. Max Holloway: Next Fight, Net Worth, Tattoos, Wife, Son - MMA India. Who is Max Holloway? Max Holloway is one of the most adored fighters on UFC’s roster. MMA India's Weekly Roundup (29 June - 5 July): Khabib's father passes away, Masvidal saves the day and more - MMA India. Welcome to the MMA India show’s weekly MMA round up.

We take a look at the biggest stories of the past week, which includes big names like Jorge Masvidal, Abdulmanap Nurmagomedov, Gilbert Burns etc. After continuous fights for the last two-months, UFC took a one week break. The promotion moves to Yas Island for the entirety of the month of July. Yas Islands will host four UFC events in the month of July as part of its Fight Island series. UFC 251 headliner Gilbert Burns tests Covid-19 positive; Jorge Masvidal ready to step in - MMA India. In a significant turn of events, UFC 251 is in need of a new title challenger. Gilbert Burns has tested positive for COVID-19 ahead of his fight against Kamaru Usman. According to reports from MMAJunkie, Gilbert Burns has been pulled out of the card which is scheduled to take place on July 12 in Yas Islands, Abu Dhabi. It is being reported that the fight could be scheduled for a later date, however, UFC hasn’t announced anything yet.