Most links are here

Librarians can save democracy - Google Slides. Truth, truthiness, triangulation: A news literacy toolkit for a “post-truth” world. We were guaranteed a free press, We were not guaranteed a neutral or a true press. 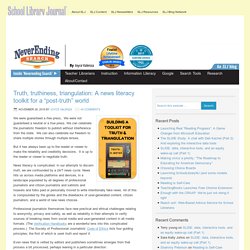 We can celebrate the journalistic freedom to publish without interference from the state. We can also celebrate our freedom to share multiple stories through multiple lenses. But it has always been up to the reader or viewer to make the reliability and credibility decisions. It is up to the reader or viewer to negotiate truth. News literacy is complicated. Professional journalists themselves face new practical and ethical challenges relating to anonymity, privacy and safety, as well as reliability in their attempts to verify sources of breaking news from social media and user-generated content in all media formats. Even news that is vetted by editors and publishers sometimes emerges from that process a bit processed, perhaps leaning in a particular direction.

And word choice itself is connected to truth. On news literacy Our kids need new types of filters. S disciplines. What’s going on? Fake news. Teaching Skepticism Where Gullibility Thrives - Luhtala - Google Slides. Facebook Fueled Anti-Refugee Attacks in Germany, New Research Suggests. ALTENA, Germany — When you ask locals why Dirk Denkhaus, a young firefighter trainee who had been considered neither dangerous nor political, broke into the attic of a refugee group house and tried to set it on fire, they will list the familiar issues. This small riverside town is shrinking and its economy declining, they say, leaving young people bored and disillusioned.

Though most here supported the mayor’s decision to accept an extra allotment of refugees, some found the influx disorienting. Fringe politics are on the rise. But they’ll often mention another factor not typically associated with Germany’s spate of anti-refugee violence: Facebook. Everyone here has seen Facebook rumors portraying refugees as a threat. Many here suspected — and prosecutors would later argue, based on data seized from his phone — that Mr.

This may be more than speculation. One thing stuck out. Nationwide, the researchers estimated in an interview, this effect drove one-tenth of all anti-refugee violence. In Order to Live: A North Korean Girl's Journey to Freedom eBook: Yeonmi Park, Maryanne Vollers: Kindle Store. Meaning: Notes from Session 12 of TED2019. Eric Liu asks us to commit to being active citizens — wherever we are. 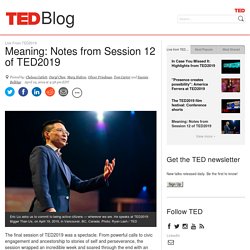 He speaks at TED2019: Bigger Than Us, on April 19, 2019, in Vancouver, BC, Canada. Photo: Ryan Lash / TED The final session of TED2019 was a spectacle. From powerful calls to civic engagement and ancestorship to stories of self and perseverance, the session wrapped an incredible week and soared through the end with an unforgettable, totally improvised wrap-up. Yeon-mi Park: The hopes of North Korea’s ‘Black Market Generation’ How Twitter shapes global public conversation: Jack Dorsey at TED2019. 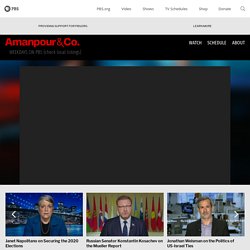 WE ACTUALLY HAD ONE AND HIS NAME IS JOHN McCAIN AND HE WANTED TO CHOOSE JOE LIEBERMAN. McCAIN, LIEBERMAN AND YOU KNOW WHAT HAPPENED. McCAIN WAS DESTROYED AND WE TOLD HIM IT WOULD BLOCK YOUR NOMINATION IF YOU WOULD DO THIS AND WE WERE EVEN MORE HYPED UP AND MORE PARTISAN TODAY, AND YOU CAN'T WISH. Truth: Notes from Session 1 of TED2019. Poet and educator Sarah Kay encourages us to welcome the beauty of the universe, however it may appear. 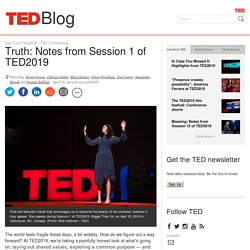 She speaks during Session 1 of TED2019: Bigger Than Us, on April 15, 2019 in Vancouver, BC, Canada. (Photo: Bret Hartman / TED) The world feels fragile these days, a bit wobbly. How do we figure out a way forward? My TED talk: how I took on the tech titans in their lair. If Silicon Valley is the beast, then TED is its belly. 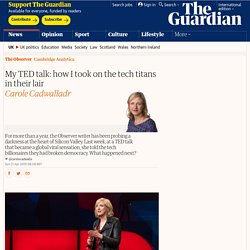 And on Monday, I entered it. The technology conference that has become a global media phenomenon with its short, punchy TED Talks that promote “Ideas Worth Spreading” is the closest thing that Silicon Valley has to a safe space. A safe space that was breached last week. A breach that I was not just there to witness, but that I actively participated in. I can’t claim either credit or responsibility – I didn’t invite myself to the conference, held annually in Vancouver, or programme my talk in a session called “Truth”. I did tell them that they had facilitated multiple crimes in the EU referendum. It was only later that I began to realise quite what TED had done: how, in this setting, with this crowd, it had committed the equivalent of inviting the fox into the henhouse. I did. A room that fell silent when I ended and then erupted in whoops and cheers.

Because it isn’t an exaggeration to say that TED is the holy temple of tech.