Logo Inspiration Gallery. 30 inspiring logos. After recently writing about logo design, I thought that it would be good to give examples of what are good logos.

Of course, many of these don’t respect some of the basic tips and still look great. As my design teachers used to say: “Once you know the rules, it’s time to break them”. Clever letter replacement to express the concept of the word. Found here. Obvious lack of readability, but still featured here: am I crazy? The abbreviation of the 3 words brand is used to form the lower part of a wolf head, making it both a logo and a cute mascot. While the typography of this logo isn’t all that great, the illustration on it is awesome. The “B” used as the shadow of the “R”, simply brilliant. Simple square typography, meaningful and efficient logo. I have to admin that I LOVE this logo. 110 Fresh Logo Designs For Design Inspiration. A Logo is a graphical element that, together with its logotype (a uniquely set and arranged typeface) form a trademark or commercial brand. 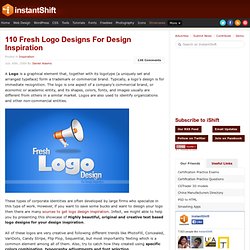 Typically, a logo’s design is for immediate recognition. The logo is one aspect of a company’s commercial brand, or economic or academic entity, and its shapes, colors, fonts, and images usually are different from others in a similar market. Logos are also used to identify organizations and other non-commercial entities. These types of corporate identities are often developed by large firms who specialize in this type of work.

However, if you want to save some bucks and want to design your logo then there are many sources to get logo design inspiration. 60 Brilliant logo design examples for your inspiration - Creative Showcase. 3D Demo Reel 2008 HD Vindeenlief.be - Femme-o-matic The Power of Team-Work. 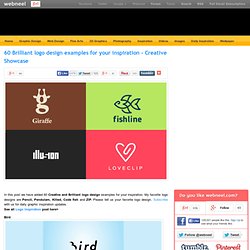 40 Awesome Music-Inspired Collection of Logo Designs. Doggy-style Logo – A Showcase of Dog-Featured Logos. Dogs, obviously, keep the leadership among the animals, most commonly used for different kinds of logos and corporate styles and identification sets. 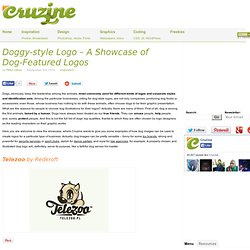 Among the particular businesses, voting for dog-style logos, are not only companies, producing dog foods or accessories; even those, whose business has nothing to do with these animals, often choose dogs to be their graphic presentation. What are the reasons for people to choose dog illustrations for their logos? 30 Elegant Designs of Diamond Logo. 25 Creative Sequential Logos – Progressive Technique!

A logo design is the cornerstone of a brand identity. 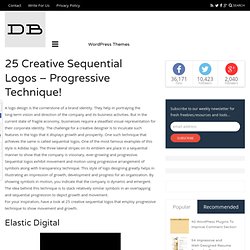 They help in portraying the long-term vision and direction of the company and its business activities. But in the current state of fragile economy, businesses require a steadfast visual representation for their corporate identity. The challenge for a creative designer is to inculcate such features in the logo that it displays growth and prosperity. One such technique that achieves the same is called sequential logos. Rt Strategy Inc. - Brand Transformation Agency™ 400+ Creative Business Card Design Inspiration.

Logo Designer Profile: Melanie McDonald. Melanie McDonald has been successfully running her own design firm for the past seven years but has found time to combine that with building a collection of logos on StockLogos as Melanie D.

There's no doubt that she has developed a recognizable style that has found favor with site visitors. Below we've included examples of both her StockLogos designs and work created for the clients of her design firm. Could you please tell us about your background and how you got into logo design? What design and illustration qualifications and skills do you have? I’m a 28 year-old graphic designer from Ontario, Canada. Design - Architecture - Magazine / Blog - Inspiration / Tendance. 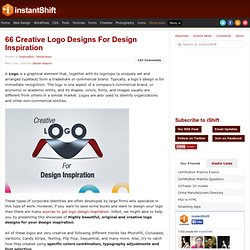 Typically, a logo’s design is for immediate recognition. The logo is one aspect of a company’s commercial brand, or economic or academic entity, and its shapes, colors, fonts, and images usually are different from others in a similar market. Logos are also used to identify organizations and other non-commercial entities. These types of corporate identities are often developed by large firms who specialize in this type of work. Logo Of The Day - Logo Design Inspiration, Gallery & Award Scheme!

Logo Inspiration Gallery. 100 Principles for Designing Logos and Building Brands. Logo. A logo is a valuable element in a business.

It performs an important part in branding as well as helps in establishing a visual identity for an organization. Thus, to… Share Oranges are very common in almost all places around the world. In fact, due to its commonality it was named after the color similar to the shade of its skin… One of the significant thing about these beasts are their impressive physical characteristics. Cherries are usually seen as delectable toppings in tasty desserts such as cakes, ice creams, banana split, etc.

Can you already smell the love in the air folks? Modernization is continually growing and has presently no signs of stopping. An apple a day keeps the doctor away. In this article we’re going to create a simple video game logo inspired by the Age of Empires series. Logos have been present in the marketing industry for so long and have proved its essence and significance in branding the company, organization, website or whatever it symbolize. Weekly Inspiration: Logos – N.2. This is a selection of the most appropriate logos we found all around the internet. 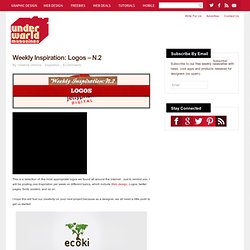 Just to remind you, I will be posting one Inspiration per week on different topics, which include Web design, Logos, twitter pages, fonts, posters, and so on. I hope this will fuel our creativity on your next project because as a designer, we all need a little push to get us started. Logo Inspiration Gallery. LOGO design - Mindnever.com. The Evolution of Corporate Logos. Probably few remember the original Apple logo, which featured Sir Isaac Newton sitting under a tree with the inscription ‘“Newton … A Mind Forever Voyaging Through Strange Seas of Thought … Alone.”

Thankfully, within a year, Jobs was introduced to Rob Janoff, a young designer based in Palo Alto, California who was assigned to help market the clunky Apple II, a far cry from today’s sleek MacBook. “For inspiration, the first thing I did was go to the supermarket, buy a bag of apples and slice them up,” recalled Janoff in an interview with Sync Magazine.

“I just stared at the wedges for hours.” Eventually, Janoff created the polychromatic Apple logo which survived until 1998. Founded in 1909, British Petroleum’s (BP) original logo was designed by an amateur who submitted his emblem in a company-wide competition. Perhaps one of America’s most recognizable brands, the Ford logo has retained its familiar oval shape since the company’s founding during the turn of the 20th century. LogoMoose - Logo design inspiration gallery and showcase.