Netflix. The Dig: You and I and You. Film buffs will recall Terence Nance’s debut An Oversimplification of Her Beauty as an uncannily original take on the well-worn fable of the uncertain twentysomething Brooklynite: boy meets girl, boy misunderstands girl and reconstructs his experience into a blend of memoir, experimental film and animation. 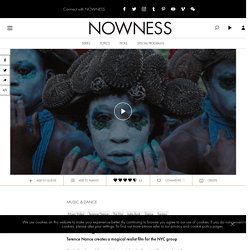 “The songs are playing at transcendence and simplicity and unseen forces” The film subsequently won a prime spot at Sundance and a co-producer in Jay Z, but the self-deprecating Nance refuses to get wrapped up in hype or categorization. After The Dig contributed to the soundtrack of Oversimplification, the director repaid the favor with an impulsive, balletic film for the band’s 2013 EP You & I. LoveSick: Heartbreak Thunder. Dutch filmmaker Mees Peijnenburg directs this visual poem that charts the reality of a breakup with raw and heartfelt aplomb. 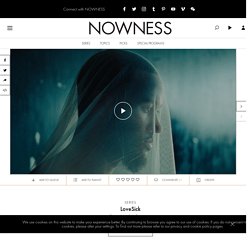 “Most breakups aren’t easy,” says Peijnenburg. “Either you hold onto hope or you cry because things will never be the same.” The viewer never meets the couple at the heart of the story, instead they are decorporialized into text conversations and telephone static. WEVAL - SOMEDAY. NOWNESS. NOWNESS. Constructed Views: Ode. NOWNESS. Dark Web: Windows. Western Medicine. ​Just Dance: Detroit in Brooklyn. In 1997 Dutch video artist Rineke Dijkstra captured after-hours revelers at The Buzz Club in Liverpool, England, and Mysteryworld of Zaandam, Netherlands. 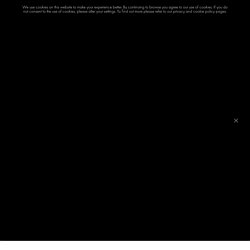 Displacing club-goers by taking them out of their dancefloor comfort zone and photographing them in a white cube, Dijkstra was renowned for her revealing, anthropological approach in her portraits of isolated social groups, from families at the beach to soldiers in the military. “At Berghain’s 10-year anniversary I didn’t leave the club for two days” For a 21st-century reimagining of Dijkstra’s project, photographer and director Erik Madigan Heck enlisted Brooklyn’s most vibrant club kids and captured them dancing to Mike Dehnert’s tech house classic “Detroit Switch Back to City” – a track that Heck had heard at Berlin’s renowned Berghain club. What was the last great night out you can recall? Erik Madigan Heck: Berghain’s 10-year anniversary. What one song makes you dance when you're alone? 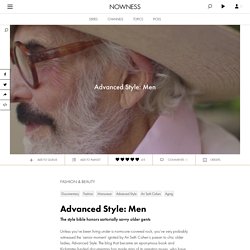 The blog that became an eponymous book and Kickstarter-funded documentary has made stars of its arresting muses, who have subsequently become the faces of high-fashion ad campaigns (Linda Rodin) and the subjects of acclaimed documentaries (Iris Apfel). “I used to steal grandpa Jack's fishing caps and argyle socks to wear to elementary school” Following this success, Cohen and Lina Plioplyte, his director and collaborator on the Advanced Style documentary, continually found themselves being asked, “What about the men?” – and so NOWNESS came calling.

The resultant collaboration is Advanced Style: Men, a bespoke film celebrating five of the platform’s beloved older gents. “I have always felt that women are judged way more harshly than men in terms of aging” NOWNESS. WoodSwimmer. NOWNESS Shorts: Litefeet. Born in the mid-noughties, “litefeet” is a descendant of breaking, or b-boying, the dance culture that accompanied the early days of hip-hop in the Bronx in the 1970s. 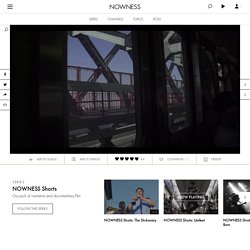 But where b-boys tended to keep to the streets, litefeet crews have taken their moves aboard New York’s subway trains – and, subsequently, run into the policing philosophy that has transformed the city over the past 15 to 20 years. “They’re trying to end something that’s beautiful, that’s positive,” laments dancer Goofy, founder of the respected W.A.F.F.L.E litefeet crew. “They’re trying to end an art.” The NYPD’s line is that litefeet is very dangerous to the acrobats themselves, as well as the riding public – a view that resonates with those who believe that New York has metamorphosed from a world that was edgy-but-exciting to a safer place that feels distinctly sanitized.

As singer James Murphy of LCD Soundsystem wrote in his 2007 hymn to the city, “New York, I Love You But You’re Bringing Me Down”: