5 Excellent Downloadable eBooks To Teach Yourself Linux. So you have heard of all the advantages and geeky babble about how Linux is better and you have finally decided to try it? 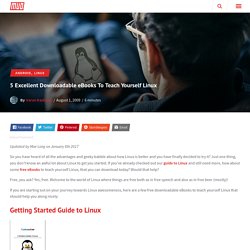 Just one thing, you don’t know an awful lot about Linux to get you started. If you’ve already checked out our guide to Linux and still need more, how about some free ebooks to teach yourself Linux, that you can download today? Would that help? Free – you ask? Yes, free. Twenty dollars - Give A Smile A Day - Digital Journal. Journey Digital Media - Absolutely Amazing New Phone: Flip Phones are Back! Boeing to launch its own, secure Android smartphone - Cell Phones &Mobile Device Technology News &Updates. You might like to think your smartphone is secure, but odds are it wouldn’t cut it for businesses that are serious about security. In the highly-specialized security market, encrypted smartphones can cost as much as $20,000. Seeing a clear opening, Boeing (yes, the airplane people) has announced development of a secure smartphone based on Google’s Android operating system.

The company didn’t mention a target price for the Boeing Phone, but made it clear it would undercut the pricing on current solutions while still being too expensive for mainstream consumers. Boeing believes that by using Android with a series of security modifications, it can build a device much cheaper. Phones from the competition often run on proprietary software and require expensive back end systems. The other primary benefit of using Android as the base for the device is that employees will actually use it.

More at National Defense Magazine, via GeekWire. Mobile Edition. Half of all enterprise IT managers have implemented or plan to implement solid state storage, research shows. 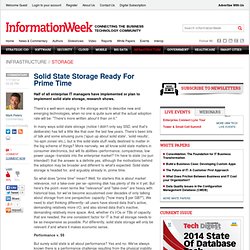 There's a well-worn saying in the storage world to describe new and emerging technologies, when no one is quite sure what the actual adoption rate will be: "There's more written about it than on it. " In many ways solid state storage (notice I didn't only say SSD, and that's deliberate) has felt a little like that over the last few years. There's been lots of talk and some amusing puns ('spun up about solid state', 'solid results', 'no-spin zones' etc.), but is this solid state stuff really destined to matter in the big scheme of things?

More narrowly, we all know solid state matters in consumer electronics, but will its abilities--performance, compactness, low power usage--translate into the enterprise market? I'm here to state (no pun intended!) So what does "prime time" mean? Performance v. TuXfiles - the Linux newbie help files, tutorials, and tips. Programming C/C++ , Programming Reference Cards and Books. Global CIO. A Privacy Manifesto in Code: What If Your Emails Never Went to Gmail and Twitter Couldnt See Your Tweets? - Alexis Madrigal - Technology.

A new tool under development by Oregon State computer scientists could radically alter the way that communications work on the web. Privly is a sort of manifesto-in-code, a working argument for a more private, less permanent Internet. The system we have now gives all the power to the service providers. That seemed to be necessary, but Privly shows that it is not: Users could have a lot more power without giving up social networking. Just pointing that out is a valuable contribution to the ongoing struggle to understand and come up with better ways of sharing and protecting ourselves online. "Companies like Twitter, Google, and Facebook make you choose between modern technology and privacy. Through browser extensions, Privly allows you to post to social networks and send email without letting those services see "into" your text. Right now, Privly is a proof of concept running on a few computers at Oregon State.

I think Privly is best viewed as an argument in code. Linux Knowledge Base and Tutorial. Optimizing C and C++ Code. Red Hat announces availability of Storage 2.0 beta. A beta version of Red Hat Storage 2.0 was announced Monday by the open-source software company. The product -- which is based on RHEL 6 -- provides a host of new options for software-based management of scalable storage, according to Red Hat, as well as integration with many top enterprise storage technologies like virtualization and Hadoop. "This new functionality enables faster file access and opens up data within Hadoop deployments to other file-based or object-based applications," Red Hat said in a statement.