Lucius Fox is coming to 'Gotham' Is Jada Pinkett Smith Leaving Gotham? Gotham may be without one of its major players in Season 2. 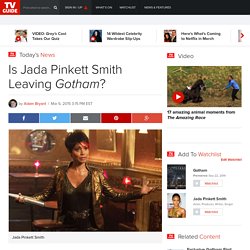 Jada Pinkett Smith, who plays the flamboyant mob boss Fish Mooney, said on Friday's Live with Kelly and Michael that she's not sure she will return to the Fox drama for its previously ordered second season. "I don't think so, no," Pinkett Smith said, when asked directly if she would return. "I signed for a year and the year is up. But there are some great things coming ahead on Gotham, believe you me. There's a lot of good stuff coming. " Gotham boss Bruno Heller teases "The beginning of the Joker saga" Gotham's producers released a statement echoing those sentiments. Pinkett Smith's character began the series as one of crime boss Carmine Falcone's top lieutenants and the boss of Oswald Cobblepot (Robin Lord Taylor).

It remains unclear how the show will write the character out of the show. Watch the full interview below. Batman will not appear in Fox's 'Gotham' series. BEVERLY HILLS, Calif. 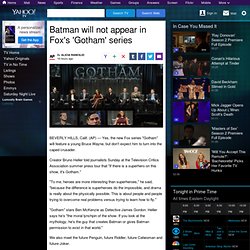 (AP) — Yes, the new Fox series "Gotham" will feature a young Bruce Wayne, but don't expect him to turn into the caped crusader. Creator Bruno Heller told journalists Sunday at the Television Critics Association summer press tour that "If there is a superhero on this show, it's Gotham.

" "To me, heroes are more interesting than superheroes," he said, "because the difference is superheroes do the impossible, and drama is really about the physically possible. This is about people and people trying to overcome real problems versus trying to learn how to fly. " "Gotham" stars Ben McKenzie as Detective James Gordon. We also meet the future Penguin, future Riddler, future Catwoman and future Joker. 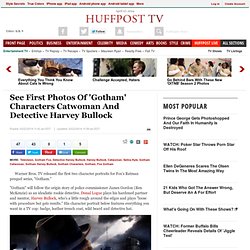 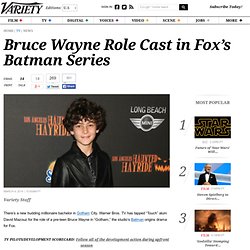 Warner Bros. TV has tapped “Touch” alum David Mazouz for the role of a pre-teen Bruce Wayne in “Gotham,” the studio’s Batman origins drama for Fox. TV PILOTS/DEVELOPMENT SCORECARD: Follow all of the development action during upfront season Mazouz will play the boy who leans on his butler Alfred and Commissioner James Gordon for guidance after his wealthy parents are murdered. Bruce Wayne has traditionally been the alter ego of the Caped Crusader — but Mazouz will not at any point become Batman in the show, something Warner Bros. took pains to point that out in announcing the casting.

Mazouz played Kiefer Sutherland’s son in the Fox drama “Touch.” Also cast in “Gotham,” which has a series order from Fox, is Camren Bicondova, who will play Selina Kyle, a teenage orphan and street thief who is suspicious and wholly unpredictable. The Gotham Pilot Features "Oswald" As A Villain. Ben McKenzie Cast As James Gordon In Gotham. Confirmed: Batman Villains & Bruce Wayne To Factor In To Gotham.