Keeping Kids in the Classroom: Or; What Is Radical Pedagogy? Radical pedagogy is not quickly or easily defined, and may not be clearly visible at first glance. 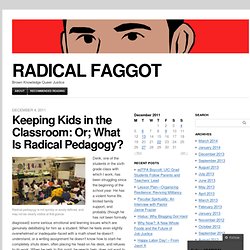 Derik, one of the students in the sixth grade class with which I work, has been struggling since the beginning of the school year. He has a violent home life, limited family support, and probably (though he has not been formally diagnosed) some serious emotional and learning issues which are genuinely debilitating for him as a student. When he feels even slightly overwhelmed or inadequate–faced with a math sheet he doesn’t understand, or a writing assignment he doesn’t know how to start–he completely shuts down, often placing his head on his desk, and refuses to do work. When he gets to this point, he rejects help, does not want to be talked to, and is often belligerent to anyone who attempts to reach out to him.

These episodes occur multiple times a week, and during harder periods multiple times a day. “Derik is struggling in this class everyday. Like this: Like Loading... Saturday School: Or; Whose Permission Are We Waiting For? If we know what kind of education we want, whose approval do we think we need to implement it? 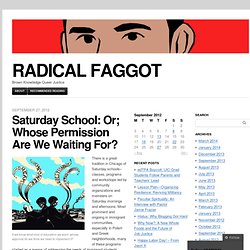 There is a great tradition in Chicago of Saturday schools–classes, programs and workshops led by community organizations and members on Saturday mornings and afternoons. Most prominent and ongoing in immigrant communities, especially in Polish and Greek neighborhoods, many of these programs started as a means of addressing the needs of immigrant students which were not being met in the larger school system, and of maintaining cultural practices in a new city. The Neoliberal Plan for Higher Education. Backed by New York Gov. 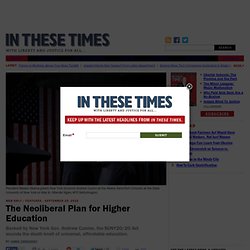 Andrew Cuomo, the SUNY20/20 Act sounds the death knell of universal, affordable education. Students from New York’s SUNY and CUNY systems played a leading role in organizing last month’s Student Power Convergence in Columbus, Ohio, which brought together students and advocates from across the continent. Now, New Yorkers are at the forefront of the Northeast Regional Student Power Convergence slated for next spring.

Unfortunately, if student activists are looking for a sympathetic audience among policymakers, they’ll find deaf ears from two very powerful men. In May, President Obama visited SUNY’s College of Nanoscale Science and Engineering (CNSE) for a bro-hug with Governor Andrew Cuomo and a speech praising Albany’s silicon-driven economic agenda. “I want what’s happening at Albany to happen all across the country,” he said, “places like Cleveland, and Pittsburgh, and Raleigh.” The president can be forgiven for offhandedly gesturing to a few swing states. 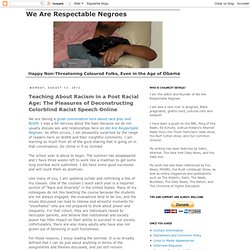 I was a bit nervous about the topic because we do not usually discuss sex and relationships here on We Are Respectable Negroes. As often occurs, I am pleasantly surprised by the range of readers here on WARN and their insightful comments. I am learning so much from all of the good sharing that is going on in that conversation. Do chime in if so inclined. The school year is about to begin. Like many of you, I am updating syllabi and rethinking a few of my classes. For those reasons, I enjoy leading the seminar. However, teaching this course is not easy.

Undergraduates tend to not believe a thing is real unless they can see it with their own eyes. In order to overcome that challenge, I use video clips, examples from popular culture, the news, and other resources which demonstrate that racism and other inequalities are real--and that they have human consequences. The simple and short story goes something like this. 1.

A centralized location for your leftist literature: Archive. The Lifehacker Pack for Students. KERSPLEBEDEB. The 50 Best Sources of Free Liberal Arts Learning Online. A liberal arts education can be the foundation for a career in just about any field, from politics to business, not just those directly related to liberal arts majors. 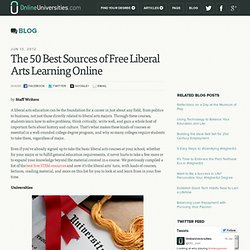 Through these courses, students learn how to solve problems, think critically, write well, and gain a whole host of important facts about history and culture. That’s what makes these kinds of courses so essential in a well-rounded college degree program, and why so many colleges require students to take them, regardless of major. Even if you’ve already signed up to take the basic liberal arts courses at your school, whether for your major or to fulfill general education requirements, it never hurts to take a few more or to expand your knowledge beyond the material covered in a course. We previously compiled a list of the best free STEM resources and now it’s the liberal arts’ turn, with loads of courses, lectures, reading material, and more on this list for you to look at and learn from in your free time.