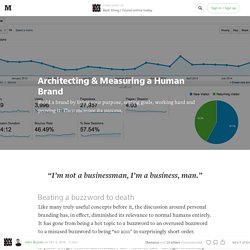 Beating a buzzword to death Like many truly useful concepts before it, the discussion around personal branding has, in effect, diminished its relevance to normal humans entirely. Today's Universities Are Ill-Equipped In Embracing the Future of Work. The future of work is a question that is currently in a very heated debate between those who believe the status quo of jobs will remain and those who believe technological unemployment will be unleashed due to advanced technologies. 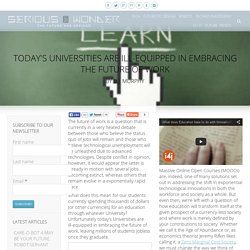 Despite conflict in opinion, however, it would appear the latter is already in motion with several jobs becoming extinct, whereas others that remain evolve in a exponentially rapid pace. What does this mean for our students currently spending thousands of dollars (or other currencies) for an education through whatever University? Unfortunately today’s Universities are ill-equipped in embracing the future of work, leaving millions of students jobless once they graduate. “The solution to the problem may lie in the technology that created the problem in the first place. This communications environment that has arisen in the last 4 years is starting to change the way in which education works.

About the author B.J. Building a Meaningful Career. If I'm honest I get rather impatient with over-simplistic platitudes suggesting that the secret to having a meaningful career is simply to follow your dream. 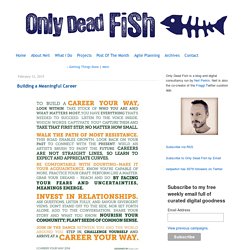 On the surface, and for some of us, this no doubt makes complete sense. If you have a dream then of-course you should do everything you can to find a way to make a living from that passion. Doing a job that doesn't feel like work is a wonderful ambition to have and thing to have achieved. An Interpretive Dance For My Boss Set To Kanye West's Gone.

Lets get Scenius. How to Answer the 5 Toughest Job Interview Questions. You’ve done your research and found the job that you want to land. 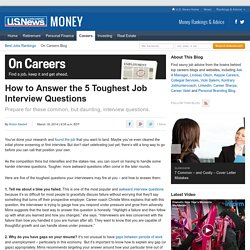 Maybe you’ve even cleared the initial phone screening or first interview. But don’t start celebrating just yet; there’s still a long way to go before you can call that position your own. As the competition thins but intensifies and the stakes rise, you can count on having to handle some harder interview questions. Tougher, more awkward questions often come in the later rounds. Here are five of the toughest questions your interviewers may fire at you – and how to answer them: 1. 2. 3. 4. The 5-Step Editing Process for a Perfect Resume. You know that you should edit your resume before you send it off in the world, making sure it’s error-free. 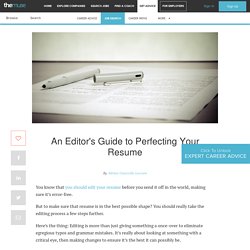 Ad student buys promoted tweets to land agency job. It can be hard to get a start in any industry. 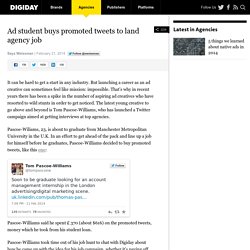 How to Make a Good First Impression at a Job Interview. How To Tweet Your Way To Your Dream Job. Can a tweet—or three—land you a dream job? 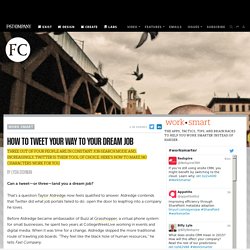 That's a question Taylor Aldredge now feels qualified to answer. Aldredge contends that Twitter did what job portals failed to do: open the door to leapfrog into a company he loves. Before Aldredge became ambassador of Buzz at Grasshopper, a virtual phone system for small businesses, he spent two years at CollegeWeekLive working in events and digital media. When it was time for a change, Aldredge skipped the more traditional route of trawling job boards. "They feel like the black hole of human resources," he tells Fast Company. 6 Creative Ad Agency Resumes. The ad business is all about creativity, and that extends to job applications and resumes, too. 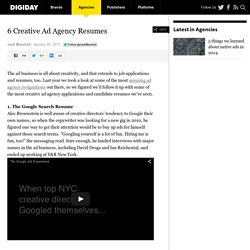 Last year we took a look at some of the most amusing ad agency resignations out there, so we figured we’d follow it up with some of the most creative ad agency applications and candidate resumes we’ve seen. 1. The Google Search Resume Alec Brownstein is well aware of creative directors’ tendency to Google their own names, so when the copywriter was looking for a new gig in 2010, he figured one way to get their attention would be to buy up ads for himself against those search terms. “Googling yourself is a lot of fun. Hiring me is fun, too!” 2. 3. 4. 5. 6. 6 Creative Ad Agency Resumes. 8 Successful Entrepreneurs Give Their Younger Selves Lessons They Wish They'd Known Then. How a Teenage High School Graduate Got a Job at Facebook. The Biggest Mistakes I See on Resumes, and How to Correct Them. Agencies Scramble to Keep Young Talent. The old saw about ad agencies is that all the value goes down the elevator every night. 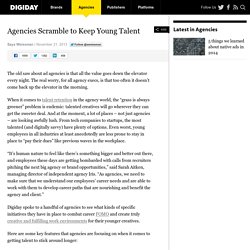 The real worry, for all agency execs, is that too often it doesn’t come back up the elevator in the morning. When it comes to talent retention in the agency world, the “grass is always greener” problem is endemic: talented creatives will go wherever they can get the sweeter deal. And at the moment, a lot of places – not just agencies – are looking awfully lush. From tech companies to startups, the most talented (and digitally savvy) have plenty of options. Even worst, young employees in all industries at least anecdotedly are less prone to stay in place to “pay their dues” like previous waves in the workplace. “It’s human nature to feel like there’s something bigger and better out there, and employees these days are getting bombarded with calls from recruiters pitching the next big agency or brand opportunities,” said Sarah Aitken, managing director of independent agency Iris.

Image via Shutterstock. 8 Things Recruiters Notice About Your Resume at First Glance (and 4 Things That Don't Matter) This question originally appeared on Quora. 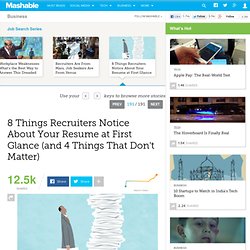 When recruiters look through a stack of resumes for candidate screening, what is the vital information they focus upon? Answer by Ambra Benjamin, engineering recruiter at Facebook, previously LivingSocial, Google and Expedia. I think this varies from recruiter to recruiter and also depends on the role for which you're applying. For one, I don't look through stacks of resumes anymore. I hate paper.

5 things you should know before getting a job in planning and strategy. We've been speaking to some of the best planners in the world to ask them one question, "What is the one thing you should know before getting a job as a planner? " Here's what they said. Jon Steel "I've met a lot of planners who think it's their job to be the most intelligent person in the room. Well, I'd take useful over intelligent any day. " "It's not brain surgery. Planning For Your Next Hire. I posted this over on Medium as well, which I will probably do time to time when it seems relevant.

Still experimenting with what it means to have so many places to blog these days. I was writing something else earlier today and included a bit of an aside about an idea I talk about a lot at Percolate: Thinking about the employee of today and the employee of tomorrow. To explain, we’re growing pretty fast. We were something like 85 at the beginning of this year and we’re right around 185 now. When you’re adding two or three people a week, like we have this year, you run into some serious challenges. How you keep an ever-expanding employee-based abreast of what the company does seems like one of the most important questions of company culture that isn’t really ever asked. I suspect (though can’t prove), that ultimately this is one of the big things that kills companies operating at high growth.

And in the end, that’s really what culture is all about. Superman viral resume. How to Write a Resume That Stands Out. The resume: there are so many conflicting recommendations out there.