Google Firestarters: Creativity in a Constrained World. A simple change of words can make a big difference when it comes to experimenting and getting things done, even in highly regulated industries (where I spent many years of my career.) 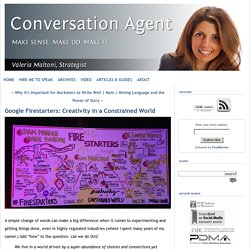 Add “how” to the question: can we do this? We live in a world driven by a super-abundance of choices and connections yet bounded by a scarcity of time and resources. How we respond to these constraints is one of the most important strategic challenges of our time and will be a large determinant of our future progress as people, businesses, and citizens of our planet.

Last night's Google Firestarters event moderated by Ben Malbon (@Malbonnington) was built on the premise to Adam Morgan's (@eatbigfish) and Mark Barden's (@MarkcBarden) upcoming book A Beautiful Constraint. We set out to uncover: What is constraint-driven problem solving? #Firestarters At Google. As you may know, Google asked me to curate a series of events for them designed to facilitate different thinking and debate around some of the more interesting and challenging issues facing planners today. 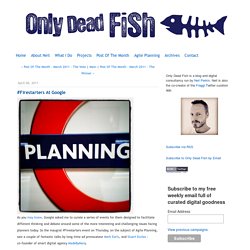 So the inaugral #Firestarters event on Thursday, on the subject of Agile Planning, saw a couple of fantastic talks by long-time ad provocateur Mark Earls, and Stuart Eccles - co-founder of smart digital agency MadeByMany. Mark gave a thought-provoking preview to his new book ('I'll Have What She's Having') due out later this year, building on the idea of how things don't spread unless people see other people doing it first, and how this means we need to shift focus towards the concept of lighting lots of fires and 'curating diffusion' (isn't that a lovely idea?)

, using data in smarter, more agile ways, identifying patterns, and how in this regard it is the space between people that is the truly interesting bit. #Firestarters 2: Design Thinking In Planning - The Event. Might Design Thinking, instrumental in bringing human-centred design principles to innovation processes, change the practice of planning? 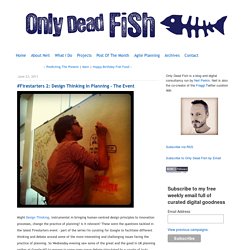 Is it relevant? These were the questions tackled in the latest Firestarters event - part of the series I'm curating for Google to facilitate different thinking and debate around some of the more interesting and challenging issues facing the practice of planning. So Wednesday evening saw some of the great and the good in UK planning gather at Google HQ to engage in some open space debate stimulated by a couple of truly thought provoking talks by Tom Hulme, Design Director at IDEO, and John Willshire, Chief Innovation Officer at PHD. Tom's excellent talk focused on Design Thinking as an approach, or philosophy, rather than a defined process.

Divergent thinking, said Tom, does not restrict creativity and can bring in a flow of new concepts to a business which can then be optimised in a continous and often concurrent cycle. Google #Firestarters 3: The New Operating System For Agencies - The Event. Google Firestarters 4: Entrepreneurship - The Event. Tuesday evening saw the great and the good of UK planning come together for the fourth Google Firestarters event, themed loosely around entrepreneurship. 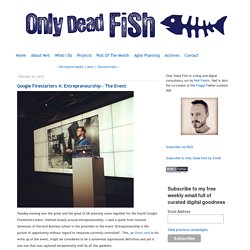 I used a quote from Howard Stevenson of Harvard Business School in the preamble to the event:"Entrepreneurship is the pursuit of opportunity without regard to resources currently controlled". This, as Simon said in his write up of the event, might be considered to be a somewhat aspirational definition and yet it was one that was captured exceptionally well by all the speakers. Someone said to me just before the event that I was quite brave getting three such eclectic speakers on the same bill, but it worked brilliantly well (phew) with several common strands weaving their way through the talks, the most notable of which, as John has written about in his excellent write up, was (perhaps surprisingly) the theme of Love. 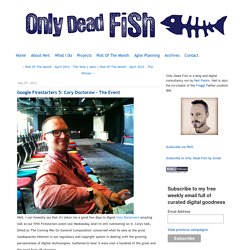 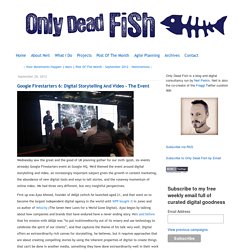 We'd themed the event around digital storytelling and video, an increasingly important subject given the growth in content marketing, the abundance of new digital tools and ways to tell stories, and the runaway momentum of online video. We had three very different, but very insightful perspectives. First up was Ajaz Ahmed, founder of AKQA (which he launched aged 21, and that went on to become the largest independent digital agency in the world until WPP bought it in June) and co-author of Velocity (The Seven New Laws for a World Gone Digital). Ajaz began by talking about how companies and brands that have endured have a never ending story. Google Firestarters 7: Remix Culture - The Event. "Remixing is not scary, or depressing. 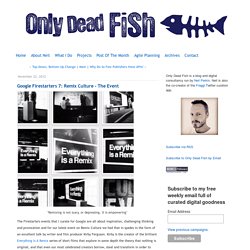 It is empowering" Google Firestarters 8: The Agency Innovation Conundrum - The Event. The great and the good from UK planning were at last night's Google Firestarters event to hear 8 rapid fire talks on the subject of agency innovation from 8 of the smartest minds I know: Patricia McDonald, Anjali Ramachandran, Antony Mayfield, Phil Adams, Beeker Northam, Glyn Britton, Graeme Wood and Nadya Powell. 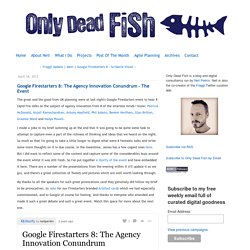 I made a joke in my brief summing up at the end that it was going to be quite some task to attempt to capture even a part of the richness of thinking and ideas that we heard on the night. So much so that I'm going to take a little longer to digest what were 8 fantastic talks and write some more thoughts on it in due course. In the meantime, James has a few cogent ones here. Google Firestarters 9: Creativity Is Not a Department. Google Firestarters 10: Planning For Good - The Event. Last week saw our tenth Google Firestarters event. 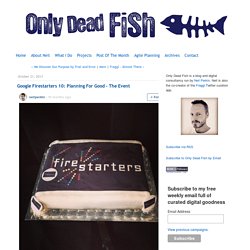 I can hardly believe it's been over two years since we had our first event. Since then we've built some pretty significant momentum, had some amazing and thought provoking talks (too many to mention individually) and a real sense of community has built around the events which is great to be a part of. Google Firestarters 11 - The Strategy is Delivery - The Event. Last week we had Russell Davies, Creative Director at the Government Digital Service and erstwhile Head of Planning at Nike, Wieden and Kennedy and Ogilvy amongst others, speak at our eleventh Google Firestarters event. 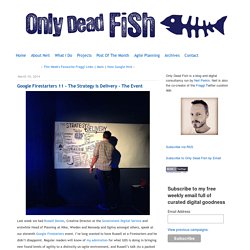 I’ve long wanted to have Russell at a Firestarters and he didn’t disappoint. Regular readers will know of my admiration for what GDS is doing in bringing new found levels of agility to a distinctly un-agile environment, and Russell’s talk (to a packed house) spanned the full range of what they had achieved but also some fascinating learnings and very quotable soundbites along the way.

Perhaps the greatest shift was designing around the needs of the user (starting with user need, rather than that of government, Russell talked here about focusing on ‘activities, not audiences’) and on doing less (government should only do what government should do, so don’t be afraid to use other people’s technology, and ‘do the hard work to make it simple’).

Google Firestarters 12 - Designing for the Future - The Event. Wednesday night saw the great and the good of UK planning come together for our twelfth (twelfth!) Google Firestarters event, themed around 'Designing for the Future', and we had three amazing speakers who gave three excellent provocations. Anab Jain, TED fellow, founder of Superflux, lecturer at the Royal College of Art (and whose work has been exhibited at MoMA, Apple and the Tate Modern), spoke about designing for the 'new normal'. She described a world of 3D printed guns, DIY drones and amateur space rockets, hackerspaces, crowdsourced innovation and surveillance (including Tiltor, the location-based 'group challenge' service designed to influence crowd behaviour and stop riots). Google Firestarters 13 - Agencies and Product Innovation - The Event.

The intersection of product innovation and agency culture and practice is a theme that has generated considerable debate in our industry and one that has been put forward by several Google Firestarters regulars as one that we should run an event on. So on Wednesday we did just that, with a packed house and three excellent provocations to help us navigate this fascinating topic. I've long been an admirier of the work of ustwo, the digital product studio who originated the amazing Monument Valley as well as work for clients like Tesco, Sony and Channel 4 ("we launch valuable products, services and companies that make a measurable difference to the world").

So it was great to have Brett MacFarlane (whose background has been in network agencies) from the studio talk about their philosophy, and what he called the ustwo 'experiment'. Nobody, says Brett, should own creativity or innovation but everyone does ideas: Advertising is about earning a reaction. Google Firestarters NYC - The New Operating System for Agencies. Last Wednesday Ben Malbon and I hosted the first ever Google Firestarters in the US.

We took as our theme 'The New Operating System for Agencies', a subject that had elicited much debate when we ran it in the UK and one that Mel Exon (who spoke at that event) called at the time 'a hairy, humbling monster of a question'. Our first speaker, Ian Fitzpatrick (CSO, Almighty) began by considering an operating system as a collection of assumptions and convictions that might be compiled into repeatable routines. Such systems can easily accumulate layers of complexity over time, and as they do assumptions and habits might compound with them.