Plants Hear Themselves Being Eaten, React Defensively. Writer, philosopher, and lecturer Joseph Campbell once famously joked that “a vegetarian is just a person who can’t hear a carrot scream.” 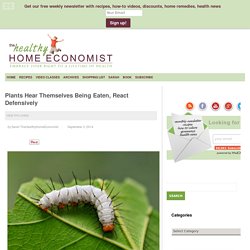 Campbell, who died in 1987, will never know how close to the truth he really was! Research from the University of Missouri-Columbia has found via audio and chemical analysis that plants hear and actually respond to the sound of caterpillars munching their leaves. Even more shocking, these same plants react to the munching sounds with built-in, biological defense mechanisms. Heidi Appel, senior research scientist with the Division of Plant Sciences at Missouri-Columbia said, “We found that feeding vibrations signal changes in the plant cells’ metabolism, creating more defensive chemicals that can repel attacks from caterpillars.” The researchers tested various sounds like gentle wind and the buzzing of nearby insects and compared this with the sound of caterpillars chewing leaves.

At least meat generally tends to be already dead before you eat it. Parched Produce: California Agriculture in a State of Drought. These are bone dry times for California. 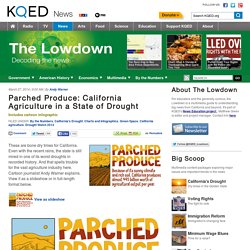 Even with the recent rains, the state is still mired in one of its worst droughts in recorded history. And that spells trouble for the vast agriculture industry here. Cartoon journalist Andy Warner explains. View it as a slideshow or in full-length format below. View as slideshow. The truth about Vikings: Not the smelly barbarians of legend but silk-clad, blinged-up culture vultures.

It’s the cry that struck fear into our ancestors’ hearts for 300 years... 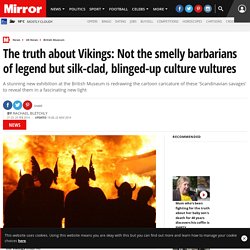 “the Vikings are coming!”. They were huge, bearded barbarians in animal fur tunics and horned helmets who raped and pillaged their way across four continents and “went berserk” on battlefields. Or were they? That’s certainly the stereotypical image of the Norse warriors handed down through ancient sagas, history books and, more recently, films and TV series. But it looks like the Vikings had a bit of a bad press – well, three centuries of it – thanks to the understandably-miffed monks whose monasteries they looted. Now, a stunning new exhibition at the British Museum is redrawing the cartoon caricature of these Scandinavian savages to reveal them in a fascinating new light. They were a contradictory bunch – shameless raiders yet shrewd traders; pagans yet culture vultures; smelly soap-dodgers who hated messy hair; and testosterone-fuelled warriors who believed girl-power won their battles. 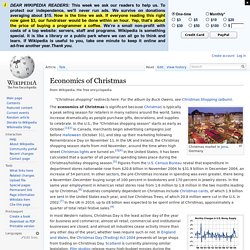 Sales increase dramatically as people purchase gifts, decorations, and supplies to celebrate. In the U.S., the "Christmas shopping season" starts as early as October.[1][2] In Canada, merchants begin advertising campaigns just before Halloween (October 31), and step up their marketing following Remembrance Day on November 11. In the UK and Ireland, the Christmas shopping season starts from mid November, around the time when high street Christmas lights are turned on.[3][4] In the United States, it has been calculated that a quarter of all personal spending takes place during the Christmas/holiday shopping season.[5] Figures from the U.S.

Census Bureau reveal that expenditure in department stores nationwide rose from $20.8 billion in November 2004 to $31.9 billion in December 2004, an increase of 54 percent. California’s Drought — Who’s Really Using all the Water? [INFOGRAPHIC] In January, California Governor Jerry Brown declared the state to be in a drought State of Emergency for unprecedented levels this upcoming summer. 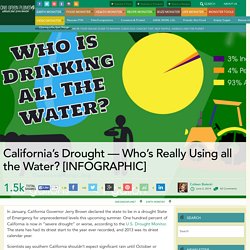 One hundred percent of California is now in “severe drought” or worse, according to the U.S. Drought Monitor. The state has had its driest start to the year ever recorded, and 2013 was its driest calendar year. Scientists say southern California shouldn’t expect significant rain until October or November, and officials are expecting one of the worst wildfire seasons on record in California, with double the typical number of fires so far this year, and we’re just at the beginning of the dry season. Are Neonicotinoids Killing Bees? A Review of Research into the Effects of Neonicotinoid Insecticides on Bees, with Recommendations for Action. 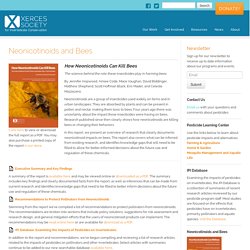 By Jennifer Hopwood, Mace Vaughan, Matthew Shepherd, David Biddinger, Eric Mader, Scott Hoffman Black, and Celeste Mazzacano. A possible link between neonicotinoids and honey bee die-offs has led to controversy across the United States and Europe. Beekeepers and environmentalists have expressed growing concern about the impact of neonicotinoids, concern based on the fact that neonicotinoids are absorbed into plant tissue and can be present in pollen and nectar, making them toxic to pollinators. This report details potential negative impacts of neonicotinoids insecticides to honey bees and other important pollinators. It also makes recommendations on how we can better protect bees.

Click here to view a full PDF of the report. Download a 2-page summary of the report here To purchase a hard copy, please visit our store. Some of the major findings of the report include: