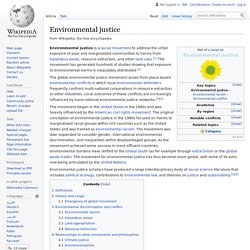 The term has two distinct uses. The first and more common usage describes a social movement in the United States whose focus is on the fair distribution of environmental benefits and burdens. Second, it is an interdisciplinary body of social science literature that includes (but is not limited to) theories of the environment, theories of justice, environmental law and governance, environmental policy and planning, development, sustainability, and political ecology.[1][2] Laws of thermodynamics.

Equivalently, machines that violate the first law (perpetual motion machines) are impossible. There have been suggestions of additional laws, but none of them achieve the generality of the four accepted laws, and they are not mentioned in standard textbooks.[1][2][3][4][5][8][9] Zeroth law[edit] First law[edit] 10 Stylish DIY Shelves - My Life and Kids. I am constantly redecorating my house. 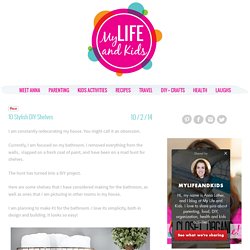 You might call it an obsession. Currently, I am focused on my bathroom. I removed everything from the walls, slapped on a fresh coat of paint, and have been on a mad hunt for shelves. The hunt has turned into a DIY project. Here are some shelves that I have considered making for the bathroom, as well as ones that I am picturing in other rooms in my house. I am planning to make #1 for the bathroom. 1. 2. 3. 4. 5. 6. 7. 8. 9. 10. What style do you like? My Life and KidsMy Life & DIY. NIDA's Role in Providing Marijuana for Research. Skip to main content En español Home » Drugs of Abuse » Marijuana » NIDA's Role in Providing Marijuana for Research NIDA's Role in Providing Marijuana for Research Revised June 2015 Under the 1961 international Single Convention on Narcotic Drugs (PDF, 680KB)External link, please review our disclaimer. 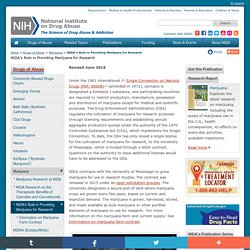 NIDA contracts with the University of Mississippi to grow marijuana for use in research studies. Marijuana for use in research can be obtained through the NIDA drug supply program through a process that was updated by the Department of Health and Human Services in June 2015 (PDF, 381KB). For NIH Funded Projects (for all studies from basic science to human trials): For Non-NIH Funded Human Research Projects: Demonstrate scientific validity and ethical soundness through review by the Food and Drug Administration (FDA) IND process. For Non-NIH Funded Non-Human/Basic Research Projects: See NIDA Drug Supply Program This page was last updated June 2015 Drugs of Abuse Emerging Trends Get this Publication. Environmental science. 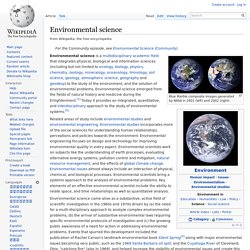 Environmental studies incorporates more of the social sciences for understanding human relationships, perceptions and policies towards the environment. Terminology[edit] Can 'Green Cement' Make Carbon Capture and Storage Obsolete? Putting carbon dioxide to good use. Every year, about 30 billion metric tons of carbon dioxide are pumped into the Earth’s atmosphere from power plants, cars and other industrial sources that rely on fossil fuels. 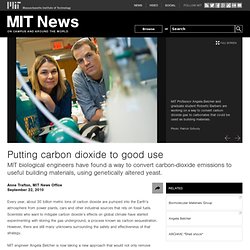 Scientists who want to mitigate carbon dioxide’s effects on global climate have started experimenting with storing the gas underground, a process known as carbon sequestration. However, there are still many unknowns surrounding the safety and effectiveness of that strategy. MIT engineer Angela Belcher is now taking a new approach that would not only remove carbon dioxide from the environment, but also turn it into something useful: solid carbonates that could be used for building construction. “We want to capture carbon dioxide and not put it underground, but turn it into something that will be stable for hundreds of thousands of years,” says Belcher, the W.M.