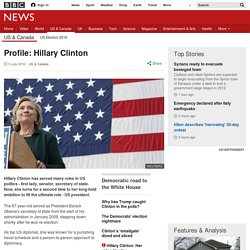 Now, she turns for a second time to her long-held ambition to fill the ultimate role - US president. The 67-year-old served as President Barack Obama's secretary of state from the start of his administration in January 2009, stepping down shortly after he won re-election. As top US diplomat, she was known for a punishing travel schedule and a person-to-person approach to diplomacy. A leading international figure and Democratic politician, Mrs Clinton is now running for the party's 2016 presidential nomination. Hillary Rodham Clinton Born 26 October, 1947 in ChicagoGraduated from Yale Law School in 1973Married Bill Clinton in 19751993-2001: Campaigned for expanding health insurance and women's rights as first ladyElected New York senator in 2000Re-elected by wide margin in 20062008: Failed bid for Democratic Party presidential nomination2009-2013: Secretary of State. Hillary Clinton - Government Official, U.S. First Lady, Women's Rights Activist. When Hillary Clinton was elected to the U.S. 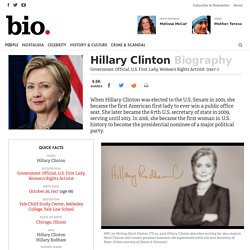 Senate in 2001, she became the first American first lady to ever win a public office seat. She later became the 67th U.S. secretary of state in 2009, serving until 2013. In 2016, she became the first woman in U.S. history to become the presidential nominee of a major political party. Synopsis Hillary Clinton was born on October 26, 1947, in Chicago, Illinois, going on to earn her law degree from Yale University.

Background Hillary Diane Clinton was born Hillary Diane Rodham on October 26, 1947, in Chicago, Illinois. Hillary Rodham was the eldest daughter of Hugh Rodham, a prosperous fabric store owner, and Dorothy Emma Howell Rodham; she has two younger brothers, Hugh Jr. As a young woman, Hillary was active in young Republican groups and campaigned for Republican presidential nominee Barry Goldwater in 1964. Education and Early Career Hillary worked at various jobs during her summers as a college student. 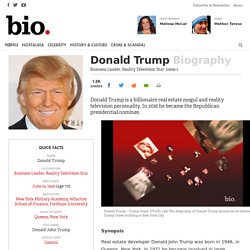 In 1971 he became involved in large, profitable building projects in Manhattan. In 1980, he opened the Grand Hyatt, which made him the city's best-known and most controversial developer. In 2004 Trump began starring in the hit NBC reality series The Apprentice, which also spawned the offshoot The Celebrity Apprentice. Trump turned his attention to politics and in 2015, he announced his candidacy for president of the United States under the Republican ticket. Early Life and Education Donald John Trump was born on June 14, 1946, in Queens, New York, the fourth of five children of Frederick C. and Mary MacLeod Trump. Trump did well at the academy, both socially and academically, rising to become a star athlete and student leader by the time he graduated in 1964. New York Real Estate Developer In 1971 Donald Trump was given control of the company, which he later renamed the Trump Organization.

Donald Trump: From mogul to presidential frontrunner. Image copyright Getty Images Long before he was a presidential candidate, Donald Trump was America's most famous and colourful billionaire. 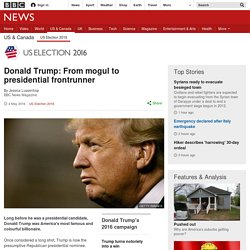 Once considered a long shot, Trump is now the presumptive Republican presidential nominee. Scepticism over Trump's candidacy stemmed not only from his controversial platform on immigration and outrageous campaign style, but from his celebrity past. Early life Mr Trump is the fourth child of New York real estate tycoon Fred Trump. He attended the Wharton School at the University of Pennsylvania and became the favourite to succeed his father after his older brother, Fred, chose to become a pilot. Mr Trump says he got into real estate with a "small" $1 million loan from his father before joining the company. His father died in 1999.

The mogul Mr Trump also developed hotels and casinos, an arm of the business that has led to four bankruptcy filings (for the businesses, not personal bankruptcy). Mr Trump also built an empire in the entertainment business. Trump will ask generals to submit plan against ISIS.