Four Magazines You Should Start Reading in 2K15. We Need to Make It Easier (and Safer) to Talk About Suicide. What happens when an elite American university kills grade inflation - Quartz. Grade inflation is endemic at American colleges and universities. 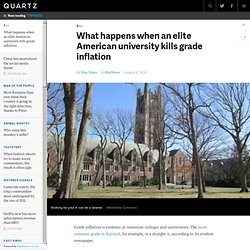 The most common grade at Harvard, for example, is a straight A, according to its student newspaper. The distortion has the potential to make high marks mean less, give bad information to degree programs and employers on student performance, and distort how people choose their majors. Those concerns prompted three professors at Wellesley College, a private women’s college near Boston, to study the effects of capping grade inflation for most classes at the school in a paper recently published in the Journal of Economic Perspectives.

The policy led to a significant reduction in the typical gap in grades between science and math majors and those in the humanities and social sciences. My Life as a Retail Worker: Nasty, Brutish, and Poor - Joseph Williams. After veteran reporter Joseph Williams lost his job, he found employment in a sporting-goods store. 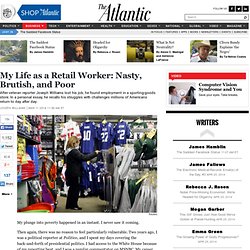 In a personal essay, he recalls his struggles with challenges millions of Americans return to day after day. Reuters My plunge into poverty happened in an instant. The complete guide to working out before work. How to Trick Your Kids Into Reading All Summer Long - Daniel Willingham. Don't bother taking away the iPad or setting minimum page counts. 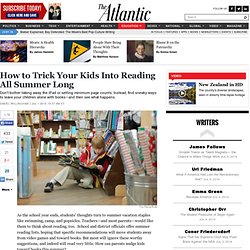 Instead, find sneaky ways to leave your children alone with books—and then see what happens. As the school year ends, students’ thoughts turn to summer vacation staples like swimming, camp, and popsicles. Teachers—and most parents—would like them to think about reading, too. School and district officials offer summer reading lists, hoping that specific recommendations will move students away from video games and toward books. Punching Gloria Steinem: inside the bizarre world of anti-feminist women. Every so often, one woman engages with me on Twitter who is against women's suffrage. 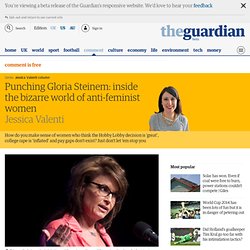 That's right - she believes women shouldn't have the right to vote. I always hoped it was a fake account, but no - this anti-suffrage enthusiast runs a blog where she writes about religion alongside recipes. It seems the only thing we have in common is a love of beets. When men are against feminism, it's frustrating, if ultimately predictable - groups with power have always been loathe to give it up. But when women come out against gender justice, it feels worse: no matter how fringe, the rise of the anti-feminist woman is not just baffling but a betrayal. 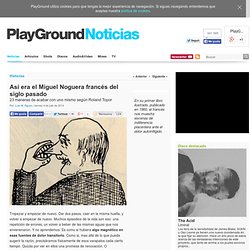 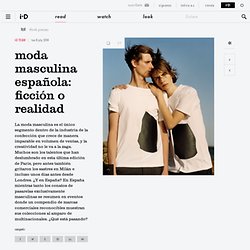 Shelving to Save a Book's Life - Susan Coll. I read books. Does that make me a nerd? This morning, I had one of the most extraordinary and exciting moments of my life. 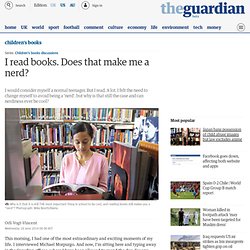 I interviewed Michael Morpurgo. And now, I'm sitting here and typing away in the Guardian offices, where I have been allowed to spend the day. For any young reader or writer, this is the absolute dream. So why have I told none of my friends, none of my teachers about what I'm doing today? Why have I kept potentially one of the most inspiring days of my life a secret? Yes, cleaners do a dirty job. But we don't deserve rubbish wages.

Nobody's Son. I lost my father this past year, and the word feels right because I keep looking for him. 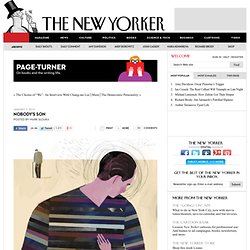 Masters of Love - Emily Esfahani Smith. Gottman wanted to know more about how the masters created that culture of love and intimacy, and how the disasters squashed it.

In a follow-up study in 1990, he designed a lab on the University of Washington campus to look like a beautiful bed-and-breakfast retreat. The Creative Class. NEW YORK, United States — “Everyone has that one friend who knows everyone and knows the coolest places to go or the best eyebrow waxer. 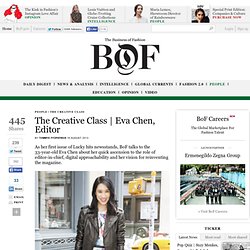 I want that to be Lucky,” Eva Chen, the recently installed editor-in-chief, says of her vision for the publication. “I want it to be the approachable, cool fashion magazine.” Chen’s appointment, announced in mid-June, marks the quick ascension of a newcomer to the editor-in-chief ranks. Indeed, Chen, 33, is the youngest editor-in-chief at a major American fashion magazine by more than a decade and the first digital native to rise to the position. Chen has upwards of 50,000 Twitter followers, 59,000 Instagram followers, and Tumblr posts that regularly receive hundreds of notes. We are losing the art of reading. ‘Although we love to argue about books, acquire them, express strong opinions about them, etc, etc, more than ever we seem to be losing the knack of reading them.’ Photograph: CBW /Alamy It has already been quite a year for lovers of book-blah.

How I Became an Unfair Teacher - Ben Orlin. It's easy to forget how tiny, arbitrary, everyday decisions can shape a kid's school experience. Warner Bros. Why You Hate Work. 'Empathetically Correct' Is the New Politically Correct - Karen Swallow Prior. When I was attending graduate school in the late 1980s and early 1990s, political correctness reigned supreme. Lassoing the powers of language, literature, and the law, the movement dubbed “PC” initially worked toward the good goal of greater inclusiveness for marginalized communities. How Supportive Parenting Protects the Brain - Olga Khazan.

Pediatricians are trying to gently shape child-rearing styles so that kids living in poverty have a chance to succeed. Taking Paternity Leave Makes Other Dads More Likely to Do the Same - Joe Pinsker. Why Some People Get Enraged When Women Have Sex. The idea of women having sex outside of marriage drives some people crazy, to the point that in certain parts of the world women are regularly murdered as a result of accusations of promiscuity. What accounts for this profound discomfort, and the (usually) more restrained version we see in the United States? A Chic French Beauty Editor Shares Her Secrets. Although the Cut's French-themed pop-up blog, Paris in 30 Days, is over, French beauty traditions and practices continue to fascinate us. Everyone Was an Artist in Kindergarten - James Hamblin.