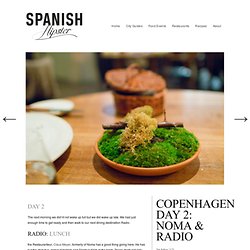 We had just enough time to get ready and then walk to our next dining destination Radio. the Restauranteur, Claus Meyer, formerly of Noma has a good thing going here. He has put the chef duo Jesper Kirketerp and Rasmus Kliim at the helm. These chefs not only no how to cook and experiment in the kitchen but they also know how to source there own food…all of which, besides the proteins, come from their own field on the island of Lilleø. 2012 European Review. 2012 was indeed the year of travel! 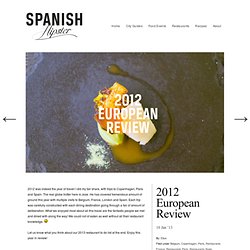 I did my fair share, with trips to Copenhagen, Paris and Spain. The real globe trotter here is Jose. He has covered tremendous amount of ground this year with multiple visits to Belgium, France, London and Spain.

Madrid. Barcelona. A Cast Iron Skillet & A Camera. How to make healthy choices every day. Budget Bytes - My stomach is full, and my wallet is too. Food, life and photographyCannelle et Vanille. 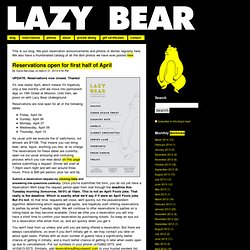 Thanks! Surprise! We have dinners Friday, Saturday, and Monday of this weekend and next weekend. After a very busy December we've had a bit of a hiatus, hanging out at Indie Chefs Week in Austin, TX. Now we're back with a bunch of new stuff. For all dates, dinner starts at 7:30pm, and should last 3.5 hours. THIS WEEKEND: First-come, first-serve tickets on sale TODAY AT NOON Tickets for this Friday, Saturday, and Monday, January 17, 18, and 20, will go on sale at lazybearsf.eventbrite.com at noon sharp today according to EventBrite's internal clock. Please do not email us saying, "My phone says noon but the tickets aren't available," or, "Something must be screwed up, I was on right at noon and the tickets were already gone.

" NEXT WEEKEND: Submit a reservation request for the lottery any time from now until Friday at noon. Michael Ruhlman - Translating the Chef’s Craft for Every Kitchen kitchen. David Lebovitz. Thai Home Cooking. IDEAS IN FOOD. I posted this picture of a "dumpling" on Twitter last weekend and it generated quite a response. 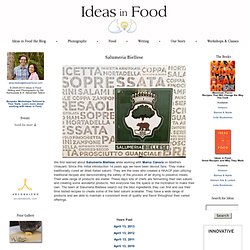 Many people felt that the word dumpling implied something small and I'll admit I was surprised when they set a plates of these in front of me. Of course looking back at the menu later I realized that they were actually, "pot stickers," shrimp and leek pot stickers to be exact. Of course those much smaller dumplings you can see in the back of the picture are the pork pot stickers so you can understand how there could be some confusion. Dumplings can be steamed, boiled or fried. Pot stickers are known as such specifically because of their cooking method. In this case the size proved to be somewhat detrimental to the experience. Years Past April 8, 2013 April 8, 2012 April 8, 2011 April 8, 2010 April 8, 2009 April 8, 2008 April 8, 2007 April 8, 2006. Adam Rapoport Interview - Bon Appetit Editor In Chief. Adam Rapoport, the NY-based editor-in-chief of Bon Appétit, loves himself a La Taqueria burrito when he's in town. 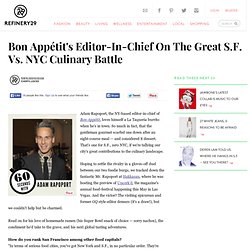 So much in fact, that the gentleman gourmet scarfed one down after an eight-course meal — and considered it dessert. That's one for S.F., zero NYC, if we're tallying our city's great contributions to the culinary landscape. Hoping to settle the rivalry in a gloves-off duel between our two foodie burgs, we tracked down the fantastic Mr. Rapoport at Hakkasan, where he was hosting the preview of Uncork'd, the magazine's annual food-festival happening this May in Las Vegas. 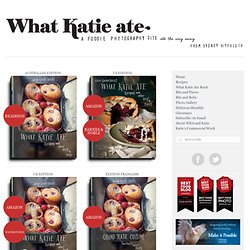