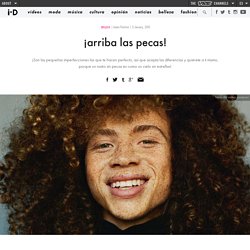 Jersey Umit Benan. Real Men Open Up About Their Desires For Women's Bodies — And Their Thoughts Are Not What You Might Think. Last year I began a collection of female body parts. 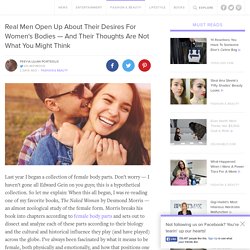 Don’t worry — I haven’t gone all Edward Gein on you guys; this is a hypothetical collection. So let me explain: When this all began, I was re-reading one of my favorite books, The Naked Woman by Desmond Morris — an almost zoological study of the female form. Morris breaks his book into chapters according to female body parts and sets out to dissect and analyze each of these parts according to their biology and the cultural and historical influence they play (and have played) across the globe.

The Kindness Diet. A new study found that women whose friends and romantic partners were accepting of their size lost more weight than those whose loved ones were critical. 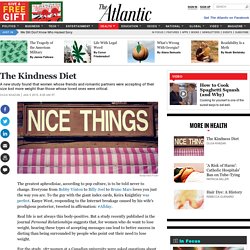 The greatest aphrodisiac, according to pop culture, is to be told never to change. Everyone from Bobby Vinton to Billy Joel to Bruno Mars loves you just the way you are. To the guy with the giant index cards, Keira Knightley was perfect. ImEnough - Body Positive Music Video The Mrs. There’s a reason we follow a bunch of random shih tzu dogs on Instagram (we can’t be alone in this). 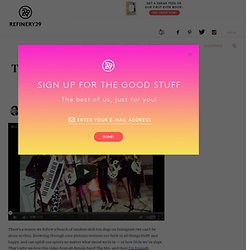 Browsing through cute pictures restores our faith in all things fluffy and happy, and can uplift our spirits no matter what mood we’re in — or how little we’ve slept. That’s why we love this video from all-female band The Mrs. and their I'm Enough movement. The video asks women to use a sliding scale to rate how they feel when they look at their reflection in the mirror. How to Look Smart - Julie Beck. Cristoph Niemann Choose your own adventure: You’re at a party, trying to have a good time, when someone brings up War and Peace. 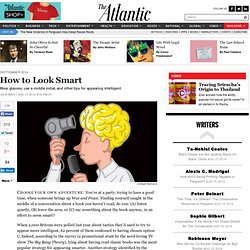 Finding yourself caught in the middle of a conversation about a book you haven’t read, do you: (A) listen quietly, (B) leave the area, or (C) say something about the book anyway, in an effort to seem smart? When 2,000 Britons were polled last year about tactics they’d used to try to appear more intelligent, 62 percent of them confessed to having chosen option C.

Why Not Admit We Didn’t Wake Up Like This? Last week I got a long-overdue haircut at a salon I’d never visited before. 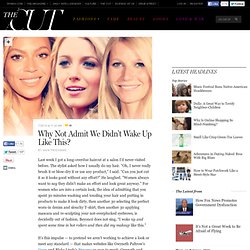 The stylist asked how I usually do my hair. "Oh, I never really brush it or blow-dry it or use any product," I said. “Can you just cut it so it looks good without any effort?” Weight Loss Surgery Pictures - Bariatric Procedure. A few months ago, a blogger named Brooke Birmingham caused a massive controversy when Shape magazine declined to publish her post-weight-loss bikini photo. 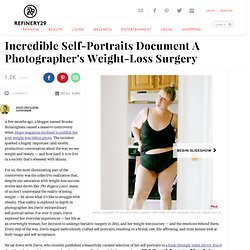 The incident sparked a hugely important (and mostly productive) conversation about the way we see weight and beauty — and how hard it is to live in a society that's obsessed with skinny. For us, the most illuminating part of the controversy was the collective realization that, despite our saturation with weight-loss success stories and shows like The Biggest Loser, many of us don't understand the reality of losing weight — let alone what it's like to struggle with obesity. That reality is explored in depth in photographer Jen Davis' extraordinary self-portrait series. For over 11 years, Davis explored her everyday experiences — her life as an overweight woman, her decision to undergo bariatric surgery in 2011, and her weight-loss journey — and the emotions behind them. Want more? How Do People React To Different Levels Of Makeup? I Decided To Find Out.

The first time he saw me without makeup, my boyfriend asked me if I was sick. 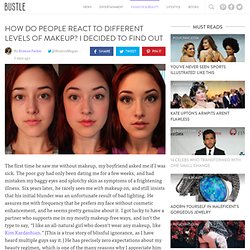 The poor guy had only been dating me for a few weeks, and had mistaken my baggy eyes and splotchy skin as symptoms of a frightening illness. Six years later, he rarely sees me with makeup on, and still insists that his initial blunder was an unfortunate result of bad lighting. He assures me with frequency that he prefers my face without cosmetic enhancement, and he seems pretty genuine about it. I got lucky to have a partner who supports me in my mostly makeup-free ways, and isn’t the type to say, “I like an all-natural girl who doesn’t wear any makeup, like Kim Kardashian.”

(This is a true story of blissful ignorance, as I have heard multiple guys say it.) Not everyone my age is so lucky. Why I Refused to Put a Shirt on For Shape. A week or so ago Shape magazine online reached out to me. 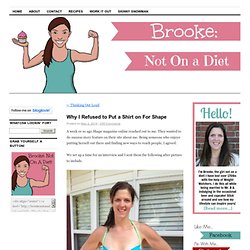 They wanted to do success story feature on their site about me. Being someone who enjoys putting herself out there and finding new ways to reach people, I agreed. We set up a time for an interview and I sent them the following after picture to include. This Is The Most Covert Weight-Loss Ad You’ll Ever See — And It Will Probably Leave You Feeling Empowered. Fashion Week Underage Models - Child Performer Laws. Photographed by Erin Yamagata. 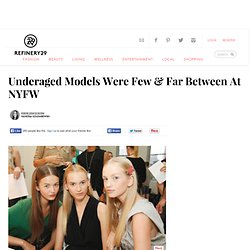 Now that New York Fashion Week is over, we're taking our time to reflect on everything we saw. We reviewed all the best shows. We reported on the wildest parties. Real Women Photoshopping - Magazine Cover Models. Within the fashion industry, Photoshop and retouching are a constant source of discussion and controversy. Members of the community have been calling for a cooldown for a while now, but it seems that retouching isn't going anywhere. Make Bikini Wax Less Painful - Bikini Waxer Tips. 'Too much' nakedness in Girls? Too much criticism of women's bodies, more like… I'm in two minds. Part of me is whispering: "Don't join in. " Don't join in with these eternal conversations about celebrities' bodies.

The more value we put on them, the more we separate them from the things they're doing. Robyn Lawley on Plus-Sized Models. Robyn Lawley has booked huge campaigns for big brands, landed on the cover of multiple fashion magazines, and created her own incredibly sexy line of swimwear — all while being labled a "plus-sized model". The issue is that, as she explains to Clique magazine, she's not actually plus-sized. Not only that, she hates the term and thinks it's "derogatory to anyone.

" Aerie Unretouched Lingerie Photos - American Eagle Ads. At this point, we're so used to seeing models who are digitally nipped, tucked, and tanned to poreless perfection that we actually get a little bit alarmed when we see the stretch marks on our own thighs. (Thanks, unrealistic media portrayals of women!) Au naturel images are so rare, we even do crazy things like offer to pay $10,000 for celeb photos that aren't retouched. Well, no cash reward needed here. In its newest campaign, American Eagle's youth lingerie brand, Aerie, threw down the gauntlet and decided to feature totally unretouched models.

In an interview with ABC News, Aerie style and fit expert Jenny Altman explained, “We left everything: beauty marks, tattoos. Of course, the models, photographed by John Urbano, are still absolutely gorgeous. La falsa aceptación de las chicas Curvy en el mundo de la moda. 100 - Projects. LaKeisha Shurn Interview. What do you do when you really, truly want to turn your life around? For LaKeisha Shurn, it was making an online video diary. Shurn, a Bay Area native, weighed over 300 pounds only a year ago. After literally working her ass off at the gym, she's come out reinvigorated, over 50 pounds lighter, and a social media sensation. Her time-lapse video has been viewed hundreds of thousands of times after she posted it to her Giveit100 page — a website that challenges people to do something (anything) in 100 days. Karen Cheng, the founder of Giveit100, told R29 that LaKeisha’s video has seduced tons of new users to join the project.

"Literally, overnight, our number of users doubled," Cheng explained, "We got more users in 24 hours, than in the last two months combined. Qué se siente cuando a uno lo retocan - BBC Mundo - Noticias. See The 5 Kick-Ass Women This Mom Dressed Her Daughter As Instead Of A Disney Princess. Photographer and mother Jaime Moore searched high and low for creative inspiration to take photos of her 5-year-old daughter Emma but found most of the ideas were how to dress your little girl like a Disney princess. It got her thinking about some real women for her daughter to look up to, whether that be a pilot, a doctor, or even an astronaut.

Then she did what I can only describe as kick-ass. Below are the five inspirational women she dressed her daughter as. Then scroll down to see the bonus sixth photo because it made me smile so much. Susan B. Click image to Zoom. The History Of Hair - Braiding Hair. Braid Like An (Ancient) Egyptian. Caroline Murphy - Douzen Kroes - Models Children Photos.

Kirstie Clements Australian Vogue Editor Book Memoir. Tavi gevinson's blog: when i was just a little girl, i asked my mother, what will i be? Working As a Teenage Model Gave Me PTSD. September 5 begins Mercedes-Benz’s biannual fashion week and, right now, models from all over the world are lining up to fill the New York runways. In the past, many of them would be teenagers. Not yet able to drink, not yet able to vote, some of them not yet able to even drive. But this season is different: In June, the New York State Senate unanimously passed a bill advocated by Sara Ziff’s Models’ Alliance that will finally provide labor protections to child models. Though the legislation hasn’t yet been signed into law by Governor Andrew Cuomo, the big agencies still aren’t sending the youngest girls to castings this month.