Target Is Making All Of Its Kids' Stuff Gender Neutral. Why One Community is Opening its Swimming Pools After Midnight. Adam Goodes Has A Message For Critics As He Retires. Indigenous Senator Completely Destroys Critics Of Adam Goodes. Why Danish Zoos Killed One Healthy Giraffe - but Spared Another. What the Copenhagen Zoo forgot: Zoos should save, not kill - latimes. The Heartbreaking Living Conditions Of Chinese Zoos. Bill Shorten Promises To Lower Voting Age To 16. If They Can Fight, They Can Vote. Opposition Leader Bill Shorten is promising a Labor government would reduce the voting age – at least to 17 and perhaps 16. 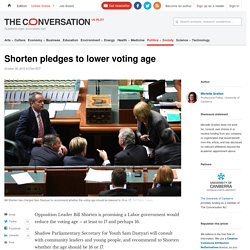 Shadow Parliamentary Secretary for Youth Sam Dastyari will consult with community leaders and young people, and recommend to Shorten whether the age should be 16 or 17. In a speech to be delivered on Saturday to the NSW Young Labor conference, Shorten says that in 2012-13 more than 17,000 Australians under 18 paid A$41 million in income tax. If Australia trusted 16- and 17-year-olds to pay tax and work, join the military, drive, fly a plane and make independent decisions about their medical care, “then we – the parliament of Australia – should extend that trust to include a direct, empowered say in our democracy”.

The challenges of tackling teenage terror. Mike Baird: "For many councils this is a final opportunity to do the right thing. 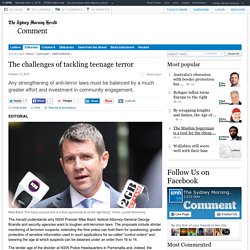 " Photo: Louise Kennerley The Herald understands why NSW Premier Mike Baird, federal Attorney-General George Brandis and security agencies want to toughen anti-terrorism laws. The proposals include stricter monitoring of terrorism suspects, extending the time police can hold them for questioning, greater protection of sensitive information used in court applications for so-called "control orders" and lowering the age at which suspects can be detained under an order from 16 to 14.

The Guardian view on what space exploration says about Europe. Look for the moment beyond the sordid argument about Greek debt, the mean-spirited management of the refugee confrontations in Calais, the murderous bitterness in the Ukraine. 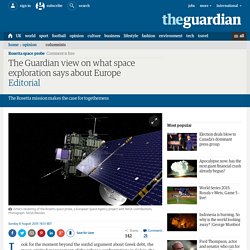 Forget the grotesque posturing of would-be Republican candidates in the US. Far away – more than 102m miles away but moving very fast – the European space probe Rosetta is escorting comet 67P/Churyumov-Gerasimenko on its journey to perihelion, its closest approach to the sun. This is the point at which the dust and gas blasted from the comet’s surface will be at its maximum, and, through Rosetta, humans will witness close at hand for the first time one of those mysterious celestial firework displays interpreted for 3,000 years as portents of wonderful or dreadful things to come.

Meanwhile, even further away, a US space probe called New Horizons, travelling at 34,000mph, has already sped past what has traditionally been considered the ninth planet, Pluto, and its moon Charon. NASA Finds "Strong" Evidence For Water On Mars. After Pluto, What Next for NASA? The first detailed glimpse of Pluto was a stunner: A mottled, multicolored orb, shimmering 3 billion miles from Earth. 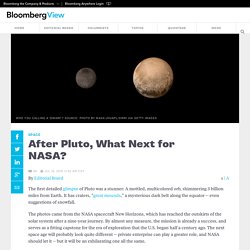 It has craters, "great mounds," a mysterious dark belt along the equator -- even suggestions of snowfall. The photos came from the NASA spacecraft New Horizons, which has reached the outskirts of the solar system after a nine-year journey. By almost any measure, the mission is already a success, and serves as a fitting capstone for the era of exploration that the U.S. began half a century ago. The next space age will probably look quite different -- private enterprise can play a greater role, and NASA should let it -- but it will be an exhilarating one all the same. It's worth dwelling for a moment on NASA's latest achievement. Interest in space nowadays is increasingly commercial. Which makes articulating a vision for the U.S. space program all the more important.

Trick or treat? The psychology of fright and Halloween horrors. Halloween is upon us. 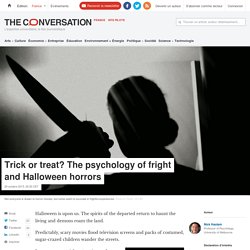 The spirits of the departed return to haunt the living and demons roam the land. Predictably, scary movies flood television screens and packs of costumed, sugar-crazed children wander the streets. In many ways, trick or treating and watching horror movies are puzzling activities. Something is still rotten in the state of FIFA. Engulfed in turmoil and emitting the stench of corruption: Outgoing FIFA president Sepp Blatter. 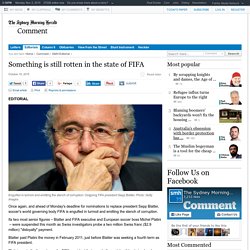 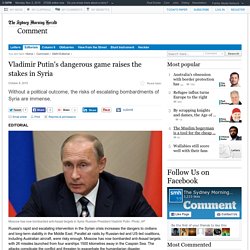 Photo: AP Russia's rapid and escalating intervention in the Syrian crisis increases the dangers to civilians and long-term stability in the Middle East. Parallel air raids by Russian-led and US-led coalitions, including Australian aircraft, were risky enough. Moscow has now bombarded anti-Assad targets with 26 missiles launched from four warships 1500 kilometres away in the Caspian Sea.