Tower of Pisa Facts - Leaning Tower of Pisa. General Info: The Tower of Pisa is located next to the Cathedral of Pisa, in Piazza dei Miracoli (Square of miracles) in the city of Pisa, Italy. 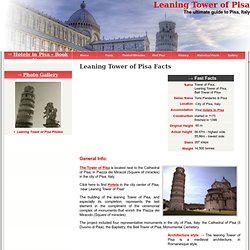 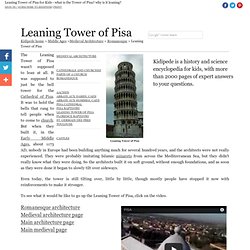 It was supposed to just be the bell tower for the Cathedral of Pisa. It was to hold the bells that rang to tell people when to come to church. But when they built it, in the Early Middle Ages, about 1173 AD, nobody in Europe had been building anything much for several hundred years, and the architects were not really experienced. They were probably imitating Islamic minarets from across the Mediterranean Sea, but they didn't really know what they were doing. Even today, the tower is still tilting over, little by little, though mostly people have stopped it now with reinforcements to make it stronger. 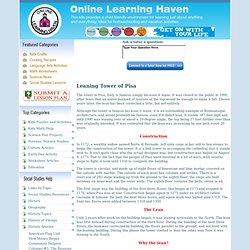 It was closed to the public in 1990, after fears that an entire busload of tourists at the top would be enough to make it fall. Eleven years later, the lean has been corrected a little, but not entirely. Although the tower is famous because it leans, it is an outstanding example of Romanesque architecture, and would probably be famous, even if it didn't lean. It stands 187 feet high and until 1990 was leaning over at about a 10-degree angle, the top being 17 feet further over than was originally intended.