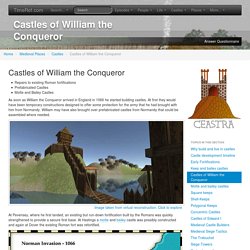 They built inside or near existing towns, usually on high ground or where there was a good water supply. In the early years the Normans heavy handedly cleared whatever was in their way to build where they wanted, knocking down housing and striping local areas of building materials. Norman Castles. The Normans built their first castle at Hastings soon after they arrived in 1066. 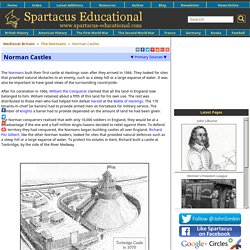 They looked for sites that provided natural obstacles to an enemy, such as a steep hill or a large expanse of water. It was also be important to have good views of the surrounding countryside. After his coronation in 1066, William the Conqueror claimed that all the land in England now belonged to him. William retained about a fifth of this land for his own use. The rest was distributed to those men who had helped him defeat Harold at the Battle of Hastings. The Norman conquerors realised that with only 10,000 soldiers in England, they would be at a disadvantage if the one and a half million Anglo-Saxons decided to rebel against them.

Build a Norman Castle. CastleXplorer : Explore the castles of England, Scotland and Wales. In medieval Europe the first castles appeared in the 9th century, when the Carolingian empire was collapsing as a result of Viking and Magyar raids. 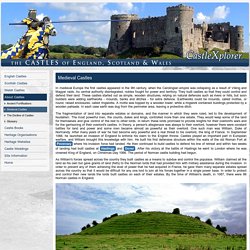 As central authority disintegrated, nobles fought for power and territory. They built castles so that they could control and defend their land. These castles started out as simple, wooden structures, relying on natural defences such as rivers or hills, but soon builders were adding earthworks - mounds, banks and ditches - for extra defence. Earthworks could be mounds, called mottes, or round, raised enclosures, called ringworks. A motte was topped by a wooden tower; while a ringwork contained buildings protected by a wooden palisade. The English Castle. The English Castleby David Dawson This article is the first in a series which attempts to outline the development of the English Medieval castle and to describe its major features. 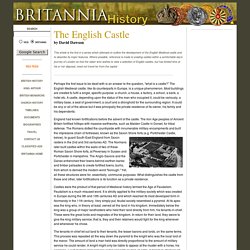 Where possible, reference is made to existing castles within a comfortable day's journey of London so that the visitor who wishes to view a selection of English castles, but has limited time at his or her disposal, need not travel far from the capital Perhaps the first issue to be dealt with is an answer to the question, "what is a castle? " Dover Castle. Dover Castle One of the largest castles in the country, strategically located at the shortest crossing point to continental Europe, Dover Castle has played a prominent part in national history. 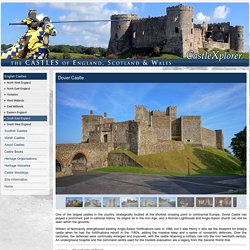 Its origins lie in the Iron Age, and a Roman Lighthouse and Anglo-Saxon church can still be seen within the grounds. William of Normandy strengthened existing Anglo-Saxon fortifications here in 1066, but it was Henry II who set the blueprint for today's castle when he had the fortifications rebuilt in the 1180's, adding the massive keep and a series of concentric defences.

Over the centuries, the defences were continually enlarged and improved, with the castle retaining a military role into the mid twentieth century. An underground hospital and the command centre used for the Dunkirk evacuation are a legacy from the Second World War. Location: Durham Castle - Durham World Heritage Site. Durham Castle has enjoyed a long history of continuous use, and is now home to students of University College, Durham. 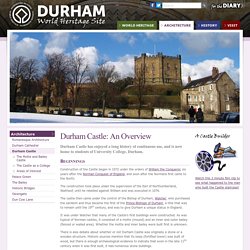 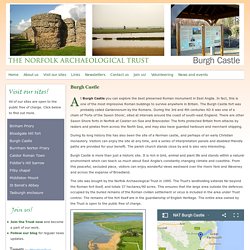 In Roman times sea levels were much higher than they are now and the coastline quite different. The fort would then have stood on the eastern edge not of low-lying grazing marsh, but of an inland ‘Great Estuary’ which covered the whole of present-day Broadland. Large ships might have docked next to the fort and sailed up the rivers Yare, Waveney and Bure to reach Venta Icenorum (Caistor St Edmund), Brampton and other important places. Sea levels and weather patterns are always changing, and ongoing climate change might lead to water levels rising again. Roman Fort.