Dspace.bracu.ac.bd/bitstream/handle/10361/3320/10203020.pdf?sequence=1. What are some examples of satire in Gulliver's Travels? Comparison of the Use of Irony and Satire in “A Modest Proposal” and “Gulliver’s Travels” by Jonathan Swift. Gulliver’s Travels to Lilliput: History, Politics, Culture & Satire of Lilliput - Gulliver's Travels. Lilliput is ruled by an Emperor, Golbasto Momarem Evlame Gurdilo Shefin Mully Ully Gue. 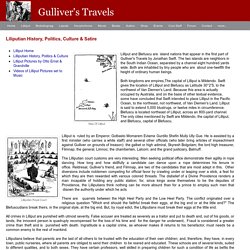 He is assisted by a first minister (who carries a white staff) and several other officials (who later bring articles of impeachment against Gulliver on grounds of treason): the galbet or high admiral, Skyresh Bolgolam; the lord high treasurer, Flimnap; the general, Limnoc; the chamberlain, Lalcom; and the grand justiciary, Balmuff. The Lilliputian court customs are very interesting. Men seeking political office demonstrate their agility in rope dancing. How long and how skillfully a candidate can dance upon a rope determines his tenure in office. Reldresal, Gulliver's friend, and Flimnap, are two of the candidates that are most adept in this. There are quarrels between the High Heel Party and the Low Heel Party.

All crimes in Lilliput are punished with utmost severity. Learn English, IELTS, EFL,ESL Public Speaking, Grammar, Literature, Linguistics by NEO. Political Satire in Part I of the Book In Part I we find Swift satirizing the manner in which political offices were distributed among the candidates by the English King in Swift’s time. 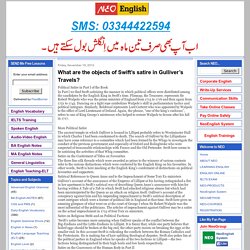 Flimnap, the Treasurer, represents Sir Robert Walpole who was the prime minister of from 1715 to 1716 and then again from 1721 to 1742. Dancing on a tight rope symbolizes ’s skill in parliamentary tactics and political intrigues. Similarly, Reldresal represents Lord Carteret who was appointed by to the office of Lord Lieutenant of . Again, the phrase, “one of the king’s cushions”, refers to one of King George’s mistresses who helped to restore to favour after his fall in 1717.

Breanna Derlagen Houyhnhnms.‖ (Swift 288 ), where Gulliver describes the way the Houyhnhnms gather to resume the only debate in their country: ―Whether the Yahoos should be exterminated from the Face of the Earth‖ (Swift. 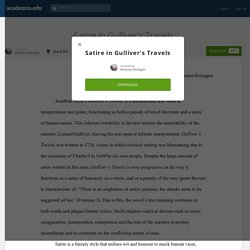 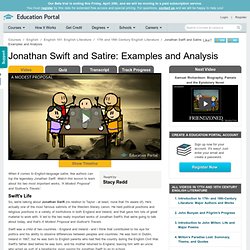 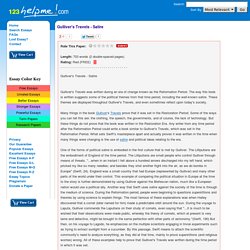 The way this book is written suggests some of the political themes from that time period, including the well-known satire. Perceptions of Satire in Gulliver's Travels. In 1726, Jonathan Swift published a book for English readers. 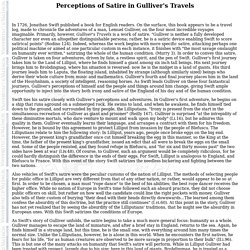 On the surface, this book appears to be a travel log, made to chronicle the adventures of a man, Lemuel Gulliver, on the four most incredible voyages imaginable. Primarily, however, Gulliver's Travels is a work of satire. "Gulliver is neither a fully developed character nor even an altogether distinguishable persona; rather, he is a satiric device enabling Swift to score satirical points" (Rodino 124). Indeed, whereas the work begins with more specific satire, attacking perhaps one political machine or aimed at one particular custom in each instance, it finishes with "the most savage onslaught on humanity ever written," satirizing the whole of the human condition.

(Murry 3). I would hide the frailties and deformities of my political mother, and place her virtues and beauties in the most advantageous light. However well he tried to speak of England, he did not manage to tell only "her virtues. " What is Swift satirizing in Gulliver's Travels? - Homework Help - eNotes.com. Swift is using Gulliver's voyages to satirize various aspects of English society. 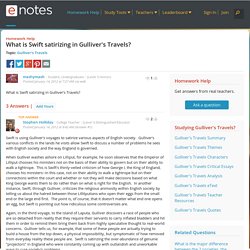 Gulliver's various conflicts in the lands he visits allow Swift to discuss a number of problems he sees with English society and the way England is governed. When Gulliver washes ashore on Lilliput, for example, he soon observes that the Emperor of Lilliput chooses his ministers not on the basis of their ability to govern but on their ability to walk a tightrope. This is Swift's thinly-veiled criticism of how George I, the King of England, chooses his ministers--in this case, not on their ability to walk a tightrope but on their connections within the court and whether or not they will make decisions based on what King George wants them to do rather than on what is right for the English.

Gulliver's travels in science and satire. For historians of science, Jonathan Swift's book Gulliver's Travels is well known both as a work of what we might call proto-science fiction and as a satire on the experimental philosophy that was being promoted by the Royal Society at the time of its publication – two years before the death of Isaac Newton. 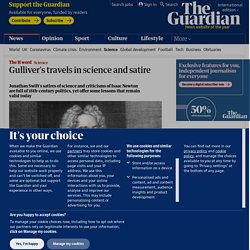 A couple of weeks ago I went to a talk at the very same Society that Swift had mocked as wasting time on projects such as the extraction of sunbeams from cucumbers. It was given by Dr Greg Lynall, a Lecturer in English at the University of Liverpool. SparkNotes: Gulliver’s Travels: Context. Gulliver's Travels. You might have heard people call Gulliver's Travels a satire. 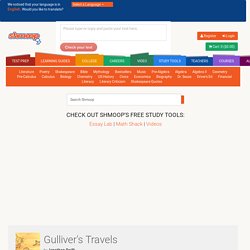 A satire is a (generally funny) fictional work that uses sarcasm and irony to poke fun at the general patheticness of humanity – our weakness, our stupidity, all that jazz. Some of our favorite satires include The Onion and The Daily Show. But if you love twenty-first century satire (like we do), you should check out the eighteenth century – those guys were huge fans of a good satire. In fact, some of the greatest thinkers of the eighteenth century, including poet Alexander Pope, mathematician John Arbuthnot, and our main man, Jonathan Swift, could not get enough satire. They even started a club, the Scriblerus Club, to express their general contempt for humanity and for bad writing in particular.

Thus, we think it's fair to say that the early eighteenth century was a good time for haters. In fact, Swift had a lot of cause to despise people, because he had a somewhat disastrous public life. Swift's Satire in Gulliver's Travels. Gulliver's Travels was unique in its day; it was not written to woo or entertain. 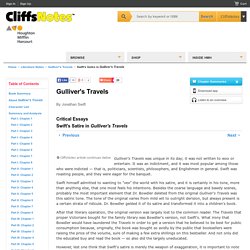 It was an indictment, and it was most popular among those who were indicted — that is, politicians, scientists, philosophers, and Englishmen in general. Swift was roasting people, and they were eager for the banquet. Swift himself admitted to wanting to "vex" the world with his satire, and it is certainly in his tone, more than anything else, that one most feels his intentions. Besides the coarse language and bawdy scenes, probably the most important element that Dr. Bowdler deleted from the original Gulliver's Travels was this satiric tone. After that literary operation, the original version was largely lost to the common reader.