A doc by any other name: explore 4 types of documentary films. Did you know that NFB.ca offers over 2500 films you can watch online? 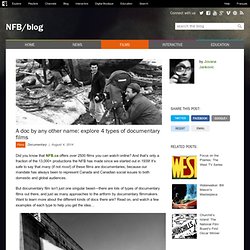 And that’s only a fraction of the 13,000+ productions the NFB has made since we started out in 1939! It’s safe to say that many (if not most) of these films are documentaries, because our mandate has always been to represent Canada and Canadian social issues to both domestic and global audiences. But documentary film isn’t just one singular beast—there are lots of types of documentary films out there, and just as many approaches to the artform by documentary filmmakers. Want to learn more about the different kinds of docs there are? Read on, and watch a few examples of each type to help you get the idea… Interactive Sessions – panels and presentations about interactive documentary. From 9th-11th June, Interactive at Sheffield will feature a series of sessions covering production, development, distribution and marketing across a wide range of technologies and platforms. 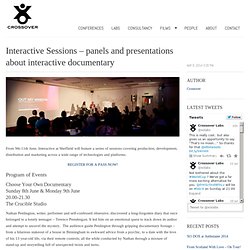 Choose Your Own Documentary Sunday 8th June & Monday 9th June 20.00-21.30 The Crucible Studio. The-art-of-the-real-at-lincoln-center-examines-documentaries. Photo “I think here there are two kinds of truths: dramatic truth and documentary reporting,” the trailblazing French filmmaker Jean Rouch once said in an interview. 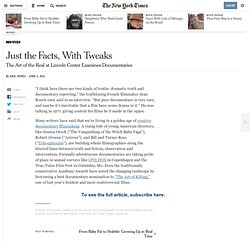 “But pure documentary is very rare, and maybe it’s inevitable that a film have some drama in it.” He was talking in 1977, giving context for films he’d made in the 1950s. Many writers have said that we’re living in a golden age of creative documentary filmmaking: A rising tide of young American directors, like Jessica Oreck (“The Vanquishing of the Witch Baba Yaga”), Robert Greene (“Actress”), and Bill and Turner Ross (“Tchoupitoulas”), are building whole filmographies along the blurred lines between truth and fiction, observation and intervention.

When Edwin speaks, you better listen: “Six months. How Alfred Hitchcock hid 10 Edits in ROPE. The Language of Shot Composition at FreshDV. Years ago I became fascinated with the subtle underscore and nuance you could add to a scene simply by your shot composition. 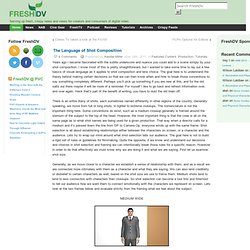 I know most of this is pretty straightforward, but I wanted to take some time to lay out a few basics of visual language as it applies to shot composition and lens choice. The goal here is to understand the theory behind making certain decisions so that we can then know when and how to break those conventions to say something completely different.

The Changing Shape of Cinema: The History of Aspect Ratio. The Next Steven Spielberg Uses A Smartphone. The next Hollywood blockbuster may not be made using a smartphone, but that day is soon coming. 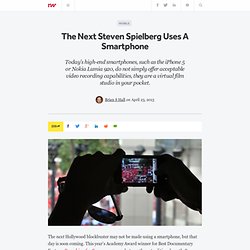 This year's Academy Award winner for Best Documentary Feature, Searching for Sugarman, was shot mostly on traditional, costly 8mm film. The director shot some final scenes, however, with his iPhone and the $2 app 8mm Vintage Camera. Increasingly, high-quality films - shorts, especially - are being made entirely with nothing more than a smartphone. Today's high-end smartphones pack a virtual film studio in your pocket. The Nokia Lumia 920, for example, includes a 1080p full-HD video camera, zoom light, image stabilization and multiple white balance modes to help ensure that perfect shot. Specs aren't enough to convince you? Blackberry has teamed up with famed Sin City director, Robert Rodriguez, to create a short film using the new Blackberry Z10. Personal Filmmaking on a Global Scale Despite their limitations, smartphones do offer some unique advantages over traditional filmmaking. The New York Times - Breaking News, World News & Multimedia.

For Documentary: Remembering Dai Vaughan, film editor, critic, and theorist. In a film I was cutting about a mercurial character, much given to hesitation and digression, rarely finishing a sentence before starting another, I came into severe conflict with the director over the extent to which the speech patterns, in voice-over, should be tidied up for the sake of clarity. 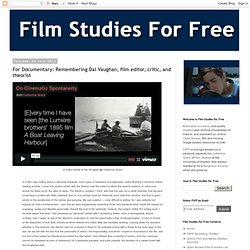 The director’s position, I think, was that this was not a vérité exercise, that we were composing a portrait with filmic materials, that no one portrait could be inherently more valid than another, and that to grant priority to the accidentals of the rushes was perverse. My own position — more difficult to define, for I was certainly not arguing for total nonintervention – was that we were progressively discarding those very elements which made the subject an engaging, quirky, and likeable personality. Toward the end of the schedule, however, the subject visited the cutting room. Development-the-Movie. True/False Film Fest. IDFA, the world’s biggest and most prestigious documentary film festival, is now underway in Amsterdam. 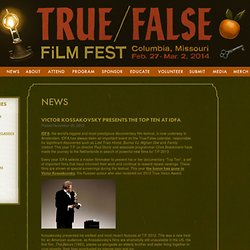 IDFA has always been an important event on the True/False calendar, responsible for significant discoveries such as Last Train Home, Burma VJ, Afghan Star and Family Instinct. This year T/F co-director Paul Sturtz and associate programmer Chris Boeckmann have made the journey to the Netherlands in search of powerful new films for T/F 2013. Every year IDFA selects a master filmmaker to present his or her documentary “Top Ten”, a set of important films that have informed their work and continue to reward repeat viewings.

These films are shown at special screenings during the festival. This year the honor has gone to Victor Kossakovsky, the Russian auteur who also received our 2012 True Vision Award. Kossakovsky presented his earliest and most recent features at T/F 2012. VHX for Artists. 12 Tips for Better Film Editing. I’m currently cutting a digital feature and this has made me think about editing styles. 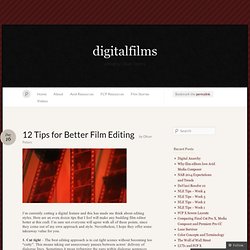 Here are an even dozen tips that I feel will make any budding film editor better at this craft. I’m sure not everyone will agree with all of these points, since they come out of my own approach and style. Nevertheless, I hope they offer some takeaway value for you. 1. Cut tight – The best editing approach is to cut tight scenes without becoming too “cutty”. In general, my approach is to start with a cut that is precise from the beginning as opposed to cutting the first pass sloppy and then whittling down from there.