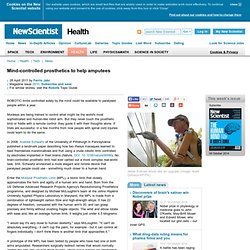 Monkeys are being trained to control what might be the world's most sophisticated and human-like robot arm. But they never touch the prosthetic limb or fiddle with a remote control: they guide it with their thoughts alone. If trials are successful, in a few months from now people with spinal cord injuries could learn to do the same. In 2008, Andrew Schwartz of the University of Pittsburgh in Pennsylvania published a landmark paper describing how two rhesus macaques learned to feed themselves marshmallows and fruit using a crude robotic limb controlled by electrodes implanted in their brains (Nature, DOI: 10.1038/nature06996). 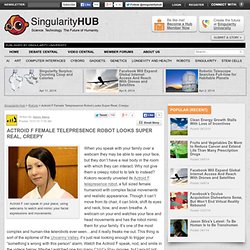 When you speak with your family over a webcam they may be able to see your face, but they don’t have a real body in the room with which they can interact. Why not give them a creepy robot to to talk to instead? Kokoro recently unveiled its Actroid F telepresence robot, a full sized female humanoid with complex facial movements and realistic appearance. Though it can’t move from its chair, it can blink, shift its eyes and neck, bow, and even breathe.