Beginners Poser 7 Tutorial - Adding New Content‬‏ Runtime DNA Inc.   Advanced Figure Manager.  ShaderWorks Library Manager. ShaderWorks Library Manager is an extremely powerfull library manager for Poser 8 and Poser Pro 2010. This new version (March 16, 2010) introduces new features (browsing files on your hard drive) and resolves bugs. Some of the new features can be found in the Service Release 1 teaser . The script was developed with the user in mind, made to increase the work flow, multiple selection (folders and files), load, conform and magnetize clothes in one click, apply multiple materials on their corresponding figures automatically (you don't need to go through each item of clothing - the script automatically detects where the MAT pose or material collection should be applied). Overview This flash movie shows the features of ShaderWorks Library Manager . Bad Attitude in 34 clicks This flash movie shows one of the main features of Library Manager : Multi load, conform and magnetize figures. 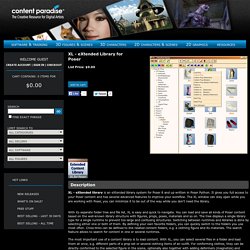 It gives you full access to your Poser content and has several advanced features to improve your workflow. The XL window can stay open while you are working with Poser, you can minimize it to be out of the way while you don't need the library. With its separate folder tree and file list, XL is easy and quick to navigate. You can load and save all kinds of Poser content based on the well-known library structure with figures, props, poses, materials and so on.

The tree displays a single library type for a single runtime to prevent too large and confusing structures. The most important use of a content library is to load content. XA - eXtended Access for Poser 8 / Pro 2010. Dimension 3D. Dimension 3D. Images (Click to Enlarge) Bug Fix Because of a typo, the script _RemoteExec_.py will not work in Poser 9 and 10. 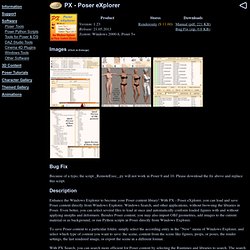 Please download the fix above and replace this script. Description Enhance the Windows Explorer to become your Poser content library! To save Poser content to a particular folder, simply select the according entry in the "New" menu of Windows Explorer, and select which type of content you want to save: the scene, content from the scene like figures, props, or poses, the render settings, the last rendered image, or export the scene in a different format. How should I install DAZ 3D content into Poser 7? : DAZ3D Help Center. 3D Content Installer ahudson. Poser 8 and Poser 2010 content library uses metadata. Woooohooo!!! 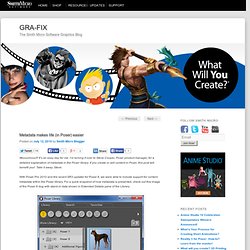 It’s an easy day for me. I’m turning it over to Steve Cooper, Poser product manager, for a detailed explanation of metadata in the Poser library. If you create or sell content in Poser, this post will benefit you! Take it away, Steve: With Poser Pro 2010 and the recent SR3 updater for Poser 8, we were able to include support for content metadata within the Poser library. There are many benefits to metadata in Poser; but rather than try and pin down the almost limitless metadata pluses, describing it more broadly will inspire some thoughts on how metadata will be a boon to both content creators and content customers.

A few quick examples In Poser, metadata can be used to distinguish between a figure that is hair or clothing or between hair that is transmapped or strand based. Metadata can provide instructions for “best use” of a content item, such as rendering settings, conformation instructions, deformer requirements or dependent objects. We use .xmp (XMP) sidecar files.