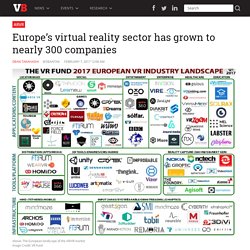 Silicon Valley-based venture firm The Venture Reality Fund tracks investments in the augmented reality and VR markets, but most of the action in the past has focused on U.S. companies. But now the VR Fund has created its first graphic showing the region’s growth in the VR ecosystem, its increased investment, and its growing international impact. The European VR landscape is based on extensive research and information gathered during meetings and calls with regional VR ambassadors across Europe.

Close to 300 VR startups were identified and reviewed, of which 116 were selected to be part of the first release of the VR Landscape Europe. Companies are also creating 360-degree VR capture hardware and software, with two French companies, VideoStitch and Giroptic, at the forefront. Virtuelna realnost - najnovije vesti iz VR sveta. Oculus Connect 3 Closing Keynote: John Carmack. How Palmer Luckey Created Oculus Rift. On the afternoon of July 4, 2012, Brendan Iribe, Nate Mitchell and Michael Antonov sat in a room at the Long Beach Hilton, nervously waiting for Palmer Luckey. 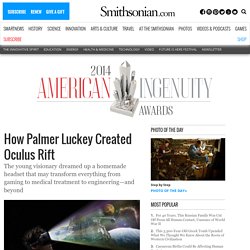 Luckey was late—very late, in fact—but that wasn’t the only thing making them edgy. Just days before, the three video game industry veterans had agreed to found a company with Luckey to develop a device he called the Oculus Rift, a virtual reality headset that had been lauded as revolutionary by nearly everyone who had tested it. La nausée, le grand mal de la réalité virtuelle. Vomit Reality: Why VR makes some of us feel sick and how to make it stop. Did you know that during a flight that experiences turbulence, more than 25 percent of the passengers will experience symptoms of motion sickness? 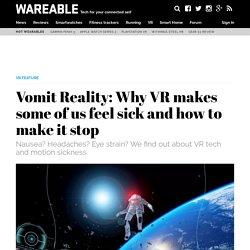 And a fairly big proportion of them will likely throw up? Many of us are used to the symptoms of motion sickness as we travel - nausea, sweating and headaches - but we'll pop an anti-nausea pill, take some ginger or just wait it out, because it's an inevitability. Now Sony's PlayStation VR is promising to take the tech mainstream but more and more people are reporting that they experience symptoms of motion sickness while they're wearing VR headsets.

When you've forked out a fortune for the tech and most likely bought it for entertainment or educational purposes, it's not as easy to ignore your symptoms or just hope they pass. We wanted to explore why we experience motion sickness when we wear VR headsets, who feels the symptoms the most and what tech companies are doing to address the problems. 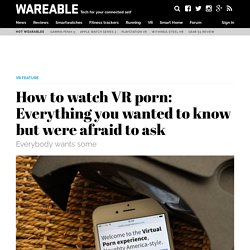 Understanding the Stages of Team Formation Learn how to use Bruce Tuckman's simple model to help your new team become effective quickly. 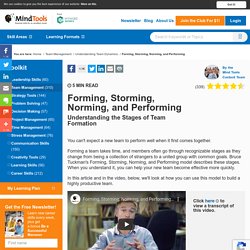 You can't expect a new team to perform well when it first comes together. Homeworking a guide for employers and employees. Management Training and Leadership Training - Online. How Digital Nomads Went From Niche to Normal – Backchannel. When GitHub launched in 2008 as a digital repository of code for programmers, its handful of employees communicated mostly through instant messenger. 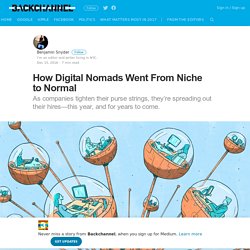 There was no office. “Chat was our office,” GitHub founder and former CEO Tom Preston-Werner said in a 2013 interview with PandoDaily. In the beginning, GitHub’s team of remote employees was a cost-cutting strategy.