5 Secret Restaurants in Paris. Promise you won’t tell anyone…! 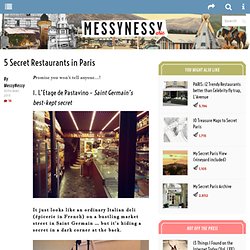 1. L’Etage de Pastavino – Saint Germain’s best-kept secret It just looks like an ordinary Italian deli (épicerie in French) on a bustling market street in Saint Germain … but it’s hiding a secret in a dark corner at the back. Indicated only by two blackboards nearly tucked out of sight, something well-worth discovering is at the top of this winding staircase … Disappear past the shelves of Italian produce and find yourself in a charming, chic and cosy dining room upstairs… Jazz music plays softly in the background. 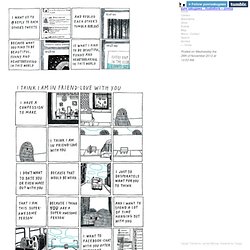 100 Awesome Art Lessons on YouTube. Whether you’re getting your bachelor’s degree in painting, graphic design or sculpture, there’s so much to learn about art — from its lush history to materials — that it can sometimes feel overwhelming. 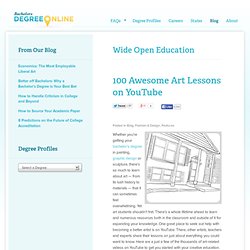 Yet art students shouldn’t fret. There’s a whole lifetime ahead to learn and numerous resources both in the classroom and outside of it for expanding your knowledge. 20 free PC apps to ease daily tasks. Build the Ultimate USB Thumb Drive Toolbox - Page 1. If you like this story, help other people find it by giving it a digg. 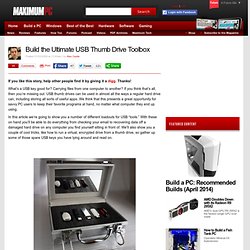 Thanks! Bill Hicks On American Drugs. Top 10 Underhyped Windows Apps. I have a few Metro Apps that I can recommend. 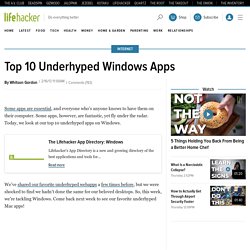 As a Desktop Explorer alternative, I can recommend My Explorer for simple browsing and Metro Commander for moving files from A to B, or C:\ to D:\. If you use Dropbox, then you also might want to install the official Dropbox App. For your YouTube needs, there is YouTube Player or, if you need a few additional features, YouTube RT. However, there yet has to be an official YouTube App for the Metro interface. Bioshock_anime_hires.jpg (1200×800) Home Network Security. This section provides a basic introduction to the technologies that underlie the Internet. 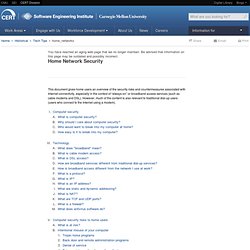 It was written with the novice end-user in mind and is not intended to be a comprehensive survey of all Internet-based technologies. Subsections provide a short overview of each topic. This section is a basic primer on the relevant technologies. For those who desire a deeper understanding of the concepts covered here, we include links to additional information.

NobodyHere. Poor Girl Eats Well — How to eat ridiculously well on a minuscule budget. Manga Tutorials » Introduction: So You Want to Draw Manga Style? If you’re here to learn how to draw or improve your drawing skills – you’ve come to the right place! 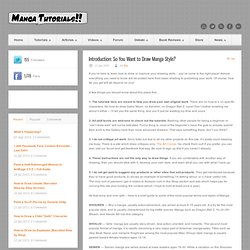 LOTR & The Hobbit in Watercolors & Tea Stains. Second only to A Tale of Two Cities, The Lord of the Rings by J.R.R. 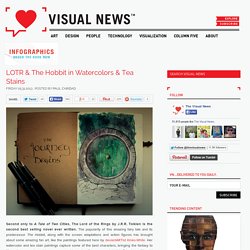 Tolkien is the second best selling novel ever written. The popularity of this amazing fairy tale and its predecessor The Hobbit, along with the screen adaptations and action figures has brought about some amazing fan art, like the paintings featured here by deviantARTist Kinko-White. Her watercolor and tea stain paintings capture some of the best characters, bringing the fantasy to life on the paper along side some memorable quotes. See more work by this Estonian self-taught artist on deviantART and Tumblr.

Top 25 Delicious Breakfast Hacks. Some Of The Best Anime Of 2012. I love to watch Anime, sure of lot of you do. 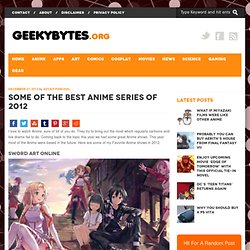 They try to bring out the most which regularly cartoons and live drama fail to do. Coming back to the topic this year we had some great Anime shows. This year most of the Anime were based in the future. Here are some of my Favorite Anime shows in 2012. Top 95 Documentaries - a list by transitasis. Turn your $60 router into a $600 router. BBC Two - Wikileaks: The Secret Life of a Superpower. Introduction To Making Games Part 1: Picking A Game Framework. Whether you are a seasoned game developer or just getting started making your own game, chances are you are going to need a good game framework to build upon. 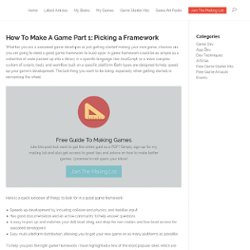 A game framework could be as simple as a collection of code packed up into a library in a specific language, like JavaScript, or a more complex system of scripts, tools, and workflow built on a specific platform. Both types are designed to help speed up your game’s development. The last thing you want to be doing, especially when getting started, is reinventing the wheel. Carrot Is A Productivity And Social Motivation App With A Sense Of Humor. There are plenty of productivity and self-motivation apps on the market, but Hong Kong-based company Innopage wanted to create one that lets users indulge their whimsical side. iOS app Carrot‘s interface only allows you to fill-in a simple template and people have used the Mad Libs-like format to set goal and reward sets (called “carrots”) that are silly (“I am going to wake up at 6:30AM and reward myself with going back to sleep at 6:45AM”) and serious (“If I run 4.5km tonight then I will treat myself to a big breakfast tomorrow”).

Encouragement is crowdsourced from Carrot’s other users and your Facebook friends. “Carrot” is a reference to “stick and carrot”–the phrase that distills the two ways that people can be motivated, either by force or by will–and Innopage is not the only one to have jumped on the idea that it might make for a catchy name for a motivational to-do app. There is another Carrot already in existence in the U.S. that barks reminders at users. Hola – Unblock censored sites with free VPN proxy & accelerate your Internet. RetailMeNot: Coupon Codes, Coupons, Promo Codes, Discounts. How to tell a story.

ShaoLan: Learn to read Chinese ... with ease! Notes from Underground. Plot summary[edit] The novel is divided into two parts. Part 1: "Underground"[edit] It consists of an introduction, three main sections and a conclusion. (i) The short introduction propounds a number of riddles whose meanings will be further developed. (1) Chapters two, three and four deal with suffering and the enjoyment of suffering; (2) chapters five and six with intellectual and moral vacillation and with conscious "inertia"-inaction; (3) chapters seven through nine with theories of reason and logic; (c) the last two chapters are a summary and a transition into Part 2.

War is described as people's rebellion against the assumption that everything needs to happen for a purpose, because humans do things without purpose, and this is what determines human history. Swinging dubstep its all gone jazzy (10 songs) 30 Fun Indie-Artist Covers of Pop Tunes. Covering a song can be tricky, but covering an extremely well-known song is downright dangerous. Most pop songs are either deeply loved or grossly hated and attempts to cover either can fall flat. We’ve compiled a list of the greatest pop covers by some of our favorite indie artists (taking liberties with the words “pop” and “indie”). 30. Ingrid Michaelson- “Toxic” (Britney Spears) Michaelson’s ukulele is a pleasant surprise in this rendition of Spears’ “Toxic,” coupled with her powerful vocals this song becomes surprisingly enjoyable.

Hamachi-Jalapeño Pizza. This is a variation on the Tuna Pizza I made a while ago and it was inspired by my old favorite dish at Nobu, the Hamachi-Jalapeño sashimi. Your Italian grandma’ will strongly disagree with the “pizza” part and you might even get slapped for it but it’s worth the risk. It’s a disk of flour tortilla that’s toasted, brushed with eel sauce and caramelized in the oven or under a broiler. Thin slices of fatty yellowtail tuna are arranged on top and brushed with a mixture of yuzu and soy sauce which has the wonderful effect of slightly curing the fish. Order of the Occult Hand. The Order of the Occult Hand is a whimsical secret society of American journalists who have been able to slip the meaningless and telltale phrase "It was as if an occult hand had…" in print as a sort of a game and inside joke. History[edit] The phrase was introduced by Joseph Flanders, then a police reporter of The Charlotte News, in the fall of 1965, when he reported on a millworker who was shot by his own family when he came back home late at night.

The Tomorrow Girl: Dresden Codak Volume 1 by Aaron Diaz. Geek Chic Fashion by GoFollowRabbits. Baby do's and don'ts. Knowing and Mastering your Thoughts with Cognitive Behavioural Therapy. Our entire lives, we have been thinking – things happen, and we simply respond. Lady Sabre & The Pirates of the Ineffable Aether - Every time I watch The Joy of Painting with Bob Ross. Adobe Muse CC. The Traveler's Workspace. CyanogenMod Installer Guides You Through Installing CM on Your Phone. ExamTime Gives Students a Place to Post Mind Maps, Notes, and Quizzes. The Psychedelic Experience. 20 free PC apps to ease daily tasks. Fashionably Geek — Clothing and cosplay for the well-dressed geek. This adorable little TARDIS is 13.5-month-old Majel all dressed up for the Fan Expo: Toronto ComiCon held this past March.

Andor's Trail. Turn your phone and tablet into scanner for intelligent document management. Pocket. How to Get Good at Chess, Fast. How to Get Good at Chess, Fast Edit: This article was unexpectedly popular, reaching #2 on Hacker News and being linked to on LifeHacker. I plan on returning to competitive chess in the next year to make my overdue march to master (USCF 2200), so I’ll post an update describing how this plan fares at the higher levels. Magnus Carlsen’s meteoric rise to the top ranked player in the world (at age 19), the highest chess rating in history (age 22), and as of a few days ago, the title of World Chess Champion (age 22) has brought with it a renewed interest in chess. Get More From Your Games: A Beginner's Guide to Graphics Settings. Google Adds Hands-Free Voice Search to Chrome (Just Say "OK Google") Dragoncon Battlemat. 20 abandoned places in the world.

How to be Well-read in No Time: 40 Short Novels - Listmuse.com. Computer Man-Caves That Make This Writer Drool And Cry. How an open-source computer kit for kids based on Raspberry Pi is taking over Kickstarter. Can you hear like an audio engineer? 6 Baffling Discoveries That Science Can’t Explain. Hiromi Beyond Standard EPK. 50 Ways to Open Your World to New Possibilities. Learning Japanese: Steps to success & fluency. The Ultimate Cheat Sheet for Reinventing Yourself. LED Crystal Earrings For The Geek Girl. Lisp in Summer Projects - welcome. Search · android. Bos/critbit. Paul Miller — Your pull request won’t be accepted. IRC channel. It's all about the Jaw! Avdude13. Total Primate Care. CS1501 Graphics and Data Visualization. Essays. Nootropics. Oxiracetam. Badgers - Weebl's Stuff.

Department of Computer Science. The Story Department - Common sense for the writing folk. 7 Reasons Why You Should Listen to Audiobooks. Department of Computer Science. Carl Jung and the Artistic Impulse: Madness in the Creative Spirit. 8 Books For a Higher Existence. Anjin Anhut on game design, pop culture and art. If Only These Pop Culture Infused Jackets Were Real. List of unsolved problems in neuroscience.