Me (Not That You Really Care) 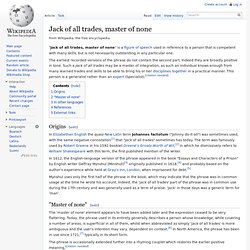 The earliest recorded versions of the phrase do not contain the second part. Indeed they are broadly positive in tone. Such a Jack of all trades may be a master of integration, as such an individual knows enough from many learned trades and skills to be able to bring his or her disciplines together in a practical manner. This person is a generalist rather than an expert (Specialist).

[citation needed] Origins[edit] In 1612, the English-language version of the phrase appeared in the book "Essays and Characters of a Prison" by English writer Geffray Mynshul (Minshull)[3] originally published in 1618,[4] and probably based on the author's experience while held at Gray's Inn, London, when imprisoned for debt.[5] "Master of none"[edit] "Jack of all trades, master of none, Certainly better than a master of one" 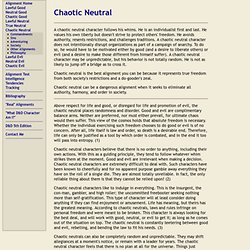 He is an individualist first and last. He values his own liberty but doesn't strive to protect others' freedom. He avoids authority, resents restrictions, and challenges traditions. A chaotic neutral character does not intentionally disrupt organizations as part of a campaign of anarchy. To do so, he would have to be motivated either by good (and a desire to liberate others) or evil (and a desire to make those different from himself suffer). Chaotic neutral is the best alignment you can be because it represents true freedom from both society's restrictions and a do-gooder's zeal. Chaotic neutral can be a dangerous alignment when it seeks to eliminate all authority, harmony, and order in society. Above respect for life and good, or disregard for life and promotion of evil, the chaotic neutral places randomness and disorder. Chaotic neutral characters believe that there is no order to anything, including their own actions. 1. 2. Chaotic Neutral.

Gruff Soul. Your result for The Golden Compass Daemon Test ... 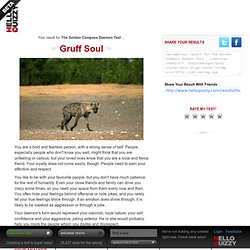 You are a bold and fearless person, with a strong sense of self. People, especially people who don't know you well, might think that you are unfeeling or callous, but your loved ones know that you are a loyal and fierce friend. Your loyalty does not come easily, though. People need to earn your affection and respect. Multi-Faceted Soul. Your result for The Golden Compass Daemon Test ... 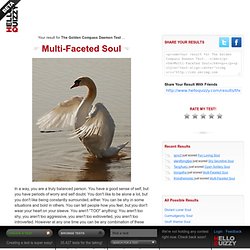 In a way, you are a truly balanced person. You have a good sense of self, but you have periods of worry and self doubt. You don't like to be alone a lot, but you don't like being constantly surrounded, either. You can be shy in some situations and bold in others. You can tell people how you feel, but you don't wear your heart on your sleeve. You tend to adapt yourself to match the situations in which you find yourself. Your daemon would represent your multi-faceted and ever-changing personality, as well as people's tendency to idealize you. Independent Soul. Your result for The Golden Compass Daemon Test ... 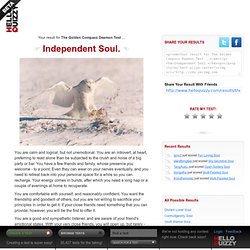 You are calm and logical, but not unemotional. You are an introvert, at heart, preferring to read alone than be subjected to the crush and noise of a big party or bar. You have a few friends and family, whose presence you welcome - to a point. Even they can wear on your nerves eventually, and you need to retreat back into your personal space for a while so you can recharge. Your energy comes in bursts, after which you need a long nap or a couple of evenings at home to recuperate.