Earning More When You Have No Free Time: How a full-time law student earned $50k on the side. In my research of over 100,000 people, I discovered that one of the top 3 barriers to earning more is “no free time.” 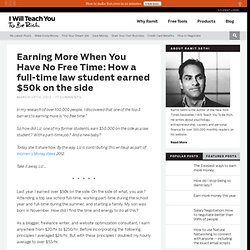 So how did Liz, one of my former students, earn $50,000 on the side as a law student? With a part-time job? And a new baby? Today, she’ll share how. By the way, Liz is contributing this writeup as part of Women’s Money Week 2012. Take it away, Liz… Last year I earned over $50k on the side. As a blogger, freelance writer, and website optimization consultant, I earn anywhere from $20/hr to $250/hr. Earn Extra Money on The Side, Even When You Have No Free Time. How To Remain Productive When You Feel Like Giving Up - Entrepreneurs-Journey.com. Like most people, some mornings I wake up and feel less than enthusiastic about working. 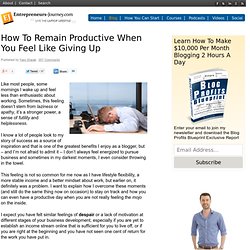 Sometimes, this feeling doesn’t stem from laziness or apathy, it’s a stronger power, a sense of futility and helplessness. Time, Attention, and Creative Work. How To Get More Out Of Your Working Day. I’ve been my own boss and worked at home for many years. 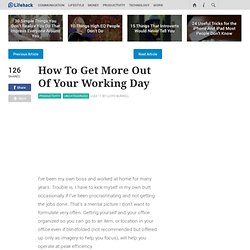 Learn from Elites: Consolidate Your Most Important Work Hours into Distinct Periods. Why You Should Set Up Your To-Do List in a Plain Text File (and How to Do It) Tweak Your Environment to Optimize Your Productivity. Don't Try To Prioritize, Work On Your Timing - Ari Meisel - The Art of Less Doing. I’ve discussed at length how you should get rid of your to do list immediately and the harmful effects of the Zeigarnik Effect which is that voice in our subconscious that nags at us to finish the unfinished. 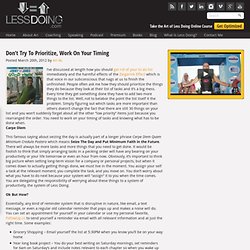 People often ask me how they should prioritize the things they do because they look at their list of tasks and it’s a big mess. David Allen's Five Steps to Optimizing Your Focus and Resources. Train Your Brain for Monk-Like Focus. Make More Time by Scheduling Your Media.

Instead of Saying "I Don't Have Time," Say "It's Not a Priority" Just Finish It. The Secret Weapon Combines GTD and Evernote into One Synchronized Productivity System. The Most Productive One Hour In Your Life. Summary – Super One Hour If you are reading this, I’m very sure that you and I have the same common goal. 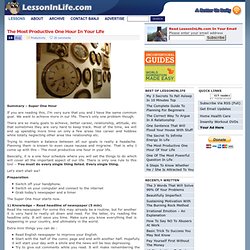 We want to achieve more in our life. There’s only one problem though. There are so many goals to achieve, better career, relationship, attitude, etc that sometimes they are very hard to keep track. Most of the time, we will end up spending more time on only a few areas like career and hobbies while totally neglecting other area like relationship etc. The Pomodoro Technique™ What is The Pomodoro Technique? 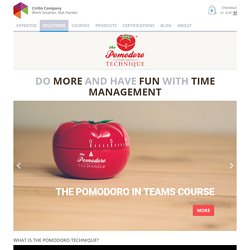 Increase your productivity at work by letting go of negative men. My alma mater is currently ranked number one in all of the college men’s basketball rankings. 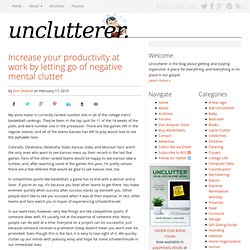 They’ve been in the top spot for 11 of the 14 weeks of the polls, and were number one in the preseason. There are five games left in the regular season, and all of the teams Kansas has left to play would love to see the Jayhawks lose. Colorado, Oklahoma, Oklahoma State, Kansas State, and Missouri fans aren’t the only ones who want to see Kansas mess up their record in the last five games. Fans of the other ranked teams would be happy to see Kansas take a tumble, and, after watching some of the games this year, I’m pretty certain there are a few referees that would be glad to see Kansas lose, too. Build Your Own Productivity Style by Remixing the Best. Best Productivity Method? SuperBetter. What You Want to Do Is Who You Are.

Lovely post. I completely agree with it. Having undergone a recent tumultous personal loss that has put all housework on my shoulders apart from my office work, the todo lists are keeping me sane and on track. I have prepared a todo list for home and another for office. The todo for home consists of all important things to do such as bill payments, but also things that would be good to do, such as get a new mattress to replace the old one. Similarly, the todo for office consists of important tasks such as complete the pending report development (I am in IT), to improve on a specific skill. I may not be able to keep the list updated (though I try) everyday, atleast I have a clear understanding of the tasks that are pending. Two Ways To Build Up Willpower. If you had stronger willpower, what would you be able to accomplish? 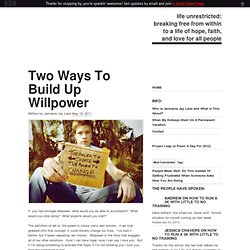 What would you stop doing? What projects would you start? The definition of will is: the power to chose one’s own actions. The Done Manifesto Lays Out 13 Ground Rules for Getting to Done. How Can I Turn Vague Goals Into Actionable To-Dos? Getting Back To Work: A Personal Productivity Toolkit. I procrastinate.

You procrastinate. We all procrastinate. The Laziness Paradox: Embrace Your Weaknesses to Accomplish More. I was recently having dinner with a friend who was telling me his plan to get in shape. 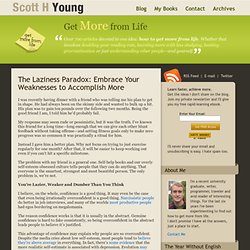 He had always been on the skinny side and wanted to bulk up a bit. His plan was to gain ten pounds over the following two months. Being the good friend I am, I told him he’d probably fail. My response may seem rude or pessimistic, but it was the truth. I’ve known this friend for a long time—long enough that we can give each other blunt feedback without taking offense—and setting fitness goals only to make zero progress was so common it was practically a ritual for him. Uncover and Manipulate Your Triggers to Optimize Your Work and Life. Becoming the Ultimate Productivity Ninja in 3 Easy Steps : The World. Time Management from the Inside Out, Second Edition: The Foolproof System for Taking Control of Your Schedule. How to Get Started with (and Stick with) a New Productivity Tool.

Boost Your Productivity: Cripple Your Technology. A New Way Of Looking at Your To-Do List. The Multiple Benefits Principle: Spend Your Time and Energy Where You Reap the Most Rewards. Productivity: How can I increase my productivity on my side projects at the end of the day when I'm tired from work. How to Get Started with (and Stick with) a New Productivity Tool. Two Lists You Should Look at Every Morning - Peter Bregman. By Peter Bregman | 11:00 AM May 27, 2009 I was late for my meeting with the CEO of a technology company and I was emailing him from my iPhone as I walked onto the elevator in his company’s office building. I stayed focused on the screen as I rode to the sixth floor.

I was still typing with my thumbs when the elevator doors opened and I walked out without looking up. Then I heard a voice behind me, “Wrong floor.” I looked back at the man who was holding the door open for me to get back in; it was the CEO, a big smile on his face. The world is moving fast and it’s only getting faster. So we try to speed up to match the pace of the action around us. Just The Right Things. My Favorite!

I love making lists. I am a master list maker. Top 10 Productivity Basics Explained. These are some things that I've found work for me: Dual screens. Some may view having dual monitors as a luxury, or simply just not necessary, but let me tell you, it makes a huge productivity boost. Put all your non-mission critical stuff on one side (the left for me), such as iTunes, chat boxes, etc,... stuff you tend to keep open and interact with frequently but isn't the core of your work. Then use the other side as pure work mission control. Not only does this give you more screen real estate, but it also has the effect of constantly making you aware of whether or not you're wasting time.

Multiple input devices. My iMac acts as the first monitor (non-essential on the left) and my second monitor (mission control on the right) is a Wacom Cintiq 21ux mounted on an articulating LCD arm. Take breaks. The Autofocus Productivity Method: Stop Maintaining To-Do Lists and Start Getting Stuff Done. My Daily To Do List is Actually Fun. Here’s How. // zenfriend.org. Argh, to do lists. Is it possible that they can actually be fun? Personal Outsourcing: How to Get More Than 24 Hours Out of Each Day. 30 Minutes a Day. How To Stay Productive After Work. The Snarky Voice in Your Head Is Killing Your Productivity; Here’s How to Stop It. SExpand. The Checklist Manifesto « Atul Gawande. Over the past decade, through his writing in The New Yorker magazine and his books Complications and Better, Atul Gawande has made a name for himself as a writer of exquisitely crafted meditations on the problems and challenges of modern medicine.

His latest book, The Checklist Manifesto, begins on familiar ground, with his experiences as a surgeon. But before long it becomes clear that he is really interested in a problem that afflicts virtually every aspect of the modern world–and that is how professionals deal with the increasing complexity of their responsibilities. How Can I Get Over the Summer Productivity Slump?

Focus Your Ambitions with the Lifehacker Hierarchy of Goals. Setting goals is easy, but prioritizing them is hard. The Book by 37signals. Getting Real. Here are the 16 chapters and 91 essays that make up the book. Notifications are evil. Notifications are evil Feb 20, 2012 Clay Johnson. 50 Tricks to Get Things Done Faster, Better, and More Easily. How to Work Like the Masters. Written by Jay of Dumb Little Man. Top 10 Ways to Create a More Focused and Productive Work Environment. Although the office is supposed to be a place for productive and efficient work, that isn't always the case. 99U - It's not about ideas. It's about making ideas happen. How I Turn Vague Ideas Into Tangible Goals.

What Successful People Do With The First Hour Of Their Work Day. Clearing to Neutral: One Habit That Prevents You From Procrastinating. Skinner Box? There's an App for That. My Paleo Media Diet. I Followed My Own Productivity Advice for a Week. Here's What Happened. Idea Rot: Why Ideas Have a Two Week Shelf Life.