Inspiration to Live Your Dream. 11 ways to beat depression naturally. The other day I saw a report that said that one in 10 Americans older than 12 take antidepressants. 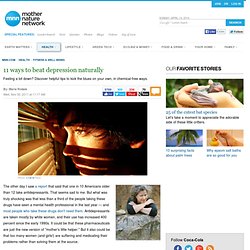 That seems sad to me. But what was truly shocking was that less than a third of the people taking these drugs have seen a mental health professional in the last year — and most people who take these drugs don't need them. Antidepressants are taken mostly by white women, and their use has increased 400 percent since the early 1990s. It could be that these pharmaceuticals are just the new version of "mother's little helper. " But it also could be that too many women (and girls!)

I am not a doctor, but I have had periodic bouts of deep depression in my life ... tell me, who hasn't? I thought I was just trying to beat depression in a one-off fight. Alan O’Mara is a successful GAA player. 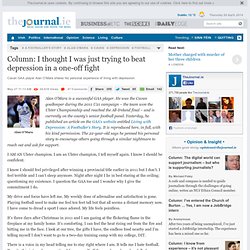 He was the Cavan goalkeeper during the 2011 U21 campaign – the team won the Ulster Championship and reached the All-Ireland final – and is currently on the county’s senior football panel. Yesterday, he published an article on the GAA’s website entitled Living with Depression: A Footballer’s Story. It is reproduced here, in full, with his kind permission.

The 22-year-old says he penned his personal story to encourage others going through a similar nightmare to reach out and ask for support. I AM AN Ulster champion. I know I should feel privileged after winning a provincial title earlier in 2011 but I don’t. My drive and focus have left me. It’s three days after Christmas in 2011 and I am gazing at the flickering flame in the fireplace at my family home. There is a voice in my head telling me to stay right where I am. The pitch we are slogging away on is barely lit. After training I stay with a team-mate. Me? ©INPHO/Cathal Noonan An important journey. Dealing with Depression: Self-Help & Coping Tips to Overcome Depression. The road to depression recovery Recovering from depression requires action, but taking action when you’re depressed is hard. 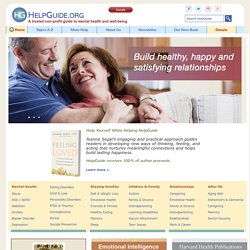 In fact, just thinking about the things you should do to feel better, like going for a walk or spending time with friends, can be exhausting. It’s the Catch-22 of depression recovery: The things that help the most are the things that are the most difficult to do. There’s a difference, however, between something that's difficult and something that's impossible. Start small and stay focused The key to depression recovery is to start with a few small goals and slowly build from there. Take things one day at a time and reward yourself for each accomplishment. Depression self-help tip 1: Cultivate supportive relationships Getting the support you need plays a big role in lifting the fog of depression and keeping it away. The thought of reaching out to even close family members and friends can seem overwhelming. 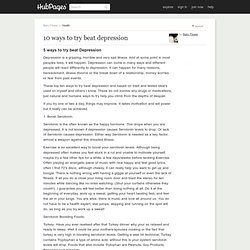 And at some point in most peoples lives, it will happen. Depression can come in many ways and different people will react differently to depression. It can happen for many reasons, bereavement, illness divorce or the break down of a relationship, money worries or fear from past events. These top ten ways to try beat depression and based on tried and tested idea's used on myself and others I know. These do not involve any drugs or medications, just natural and humane ways to try help you climb from the depths of despair. If you try one or two a day, things may improve. 1. Serotonin is the often known as the happy hormone. Exercise is an excellent way to boost your serotonin levels. Serotonin Boosting Foods- Turkey- Have you ever realised after that Turkey dinner why your so relaxed and ready to sleep. 2.

Cross Word or Quiz Sites online. Become a volenteer to the less Fortunate. 3. There are many ways people get depressed.