Zombie Dash Board Game. The Lighted Bocce Ball Set. This is the illuminated bocce ball set that allows you to play in the dark. 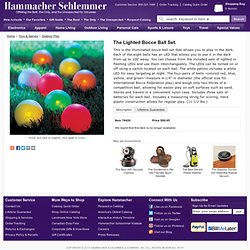 Each of the eight balls has an LED that allows you to see it in the dark from up to 100' away. You can choose from the included sets of lighted or flashing LEDs and use them interchangeably. The LEDs can be turned on or off using a switch located on each ball. The white pallino includes a white LED for easy targeting at night. The four pairs of balls--colored red, blue, yellow, and green--measure 4 1/4" in diameter (the official size for International Bocce Federation play) and weigh only two-thirds of a competition ball, allowing for easier play on soft surfaces such as sand.

Lifetime Guarantee The Lighted Bocce Ball Set comes with The Hammacher Schlemmer Lifetime Guarantee at no additional charge. Should you have any questions, we are available 24 hours a day, seven days a week. The 50 Foot Snowball Launcher. This toy blaster makes and launches softball-sized snowballs up to 50', allowing rapid, long-range assaults during neighborhood snowball confrontations. 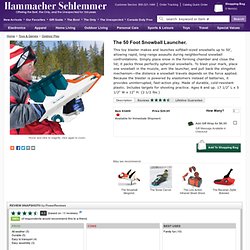 Simply place snow in the forming chamber and close the lid; it packs three perfectly spherical snowballs. To blast your mark, place one snowball in the muzzle, aim the launcher, and pull back the slingshot mechanism—the distance a snowball travels depends on the force applied. Because the blaster is powered by elastomers instead of batteries, it provides uninterrupted, fast-action play. Made of durable, cold-resistant plastic. Includes targets for shooting practice. Lifetime Guarantee The 50 Foot Snowball Launcher comes with The Hammacher Schlemmer Lifetime Guarantee at no additional charge. Should you have any questions, we are available 24 hours a day, seven days a week. 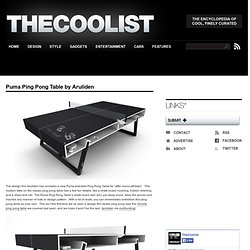 This modern take on the classic ping pong table has a few fun details, like a chalk board covering, hidden shelving and a chain-link net. The Puma Ping Pong Table’s chalk board skin let’s you keep score, label the winner and inscribe any manner of note or design pattern. With a bit of chalk, you can immediately embellish this ping pong table as your own. This isn’t the first time we’ve seen a design firm tackle ping pong (see the chrome ping pong table we covered last year), and we hope it won’t be the last. Written by: thecoolist on June 2, 2010. Learn to play pool in ten minutes.

How to win Rock-paper-scissors every time. I admit it. 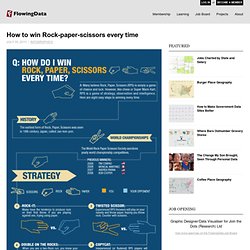 When I first heard there are actual tournaments for Rock-paper-scissors, sanctioned by the World Rock Paper Scissors Society, I laughed. I mean seriously, $50k to the winner of a game that requires no skill whatsoever? Absurd. Boy was I wrong. Rock-paper-scissors isn't just a silly game kids play or a way to decide who has to be the designated driver at parties. Males have a tendency to throw rock on their first try, inexperienced RPS players will subconsciously deliver the item that won previously, and paper is thrown least often, so use it as a surprise. A Better Hangman Strategy. There’s no easy way to say it. 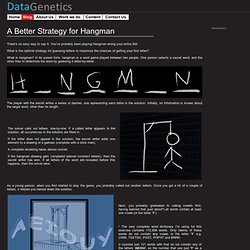 You’ve probably been playing Hangman wrong your entire life! What is the optimal strategy for guessing letters to maximize the chances of getting your first letter? What is hangman? In its purest form, hangman is a word game played between two people. One person selects a secret word, and the other tries to determine the word by guessing it letter-by-letter. The player with the secret writes a series of dashes, one representing each letter in the solution. As a young person, when you first started to play the game, you probably called out random letters. Next, you probably graduated to learning that not all letters are used equally.

Once you get just a couple of letters of in a hangman puzzle, the game becomes easier. Code, Cyphers and Secret Writing Ordering of letter frequency in English language: Hacking Scrabble (Part One) @karger I was just about to post the exact same idea. 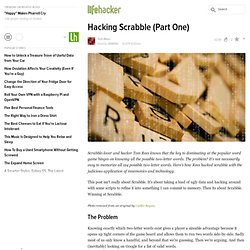 Storming the Castle: The Princess Bride Game. Settlers of Catan.