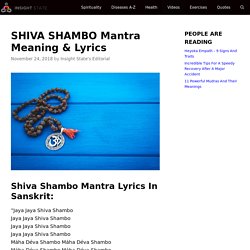 This is a Sanskrit mantra for the devotion of Lord Shiva (in Sanskrit signifies Auspicious One), or Siva, is one of the main Deities of Hinduism. Another meaning of Shiva is direct: „who promises you bliss”. He is worshiped as the paramount lord in Shaivism and He represents the Consciousness of Infinite Goodness. He forms the part of the Trimurti (Trinity), the other being Lord Brahma, the creator, and Lord Vishnu, the preserver. It is also said that Lord Shiva represents the threefold qualities of nature: creation, preservation, and destruction, although preservation is usually attributed to Lord Vishnu. Tumi Bhaja re Mana.

How Sound Baths Ended Up Everywhere. “Bring yourself back to your awareness,” said Sara Auster, a self-proclaimed sound healer, after 45 minutes in a ballroom at a hotel in Chicago where she created vibrations using crystal bowls and tuning forks as well as a traditional Indian accordion, known as a shruti box. 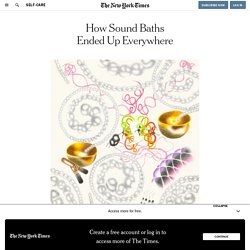 Seventy-five people got up like a gaggle of toddlers being shaken from a nap. The session, which cost $30, and was like many popping up in churches, community centers and even some prisons and hospitals. The goal, practitioners say, is to use sound to tackle individual and collective anxiety, depression, insomnia and more. Recently, musicians like Erykah Badu and the Icelandic band Sigur Ros have also dipped into sound healing. Over in the tech world, mindfulness is deeply in vogue. Some health facilities have taken note as well. How Sound Baths Make You Feel “Healed”

The fashionable intelligence at The New York Times has declared sound baths are everywhere, and it’s true. 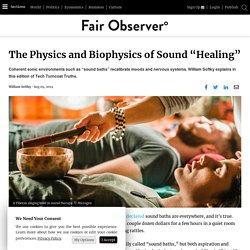 Well-educated people like myself now routinely spend a couple dozen dollars for a few hours in a quiet room listening to ringing gongs, thrumming bowls and shaking rattles. Sound Healing and Therapy Classes, Treatments and Instruments - Sound Healing Center. Keep Your Brain Young with Music. If you want to firm up your body, head to the gym. 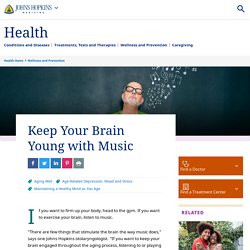 If you want to exercise your brain, listen to music. “There are few things that stimulate the brain the way music does,” says one Johns Hopkins otolaryngologist. “If you want to keep your brain engaged throughout the aging process, listening to or playing music is a great tool. It provides a total brain workout.” Research has shown that listening to music can reduce anxiety, blood pressure, and pain as well as improve sleep quality, mood, mental alertness, and memory. The Brain-Music Connection Experts are trying to understand how our brains can hear and play music. Johns Hopkins researchers have had dozens of jazz performers and rappers improvise music while lying down inside an fMRI (functional magnetic resonance imaging) machine to watch and see which areas of their brains light up.

“Music is structural, mathematical and architectural. Try It Learn an Instrument Everyday Brain Boosts from Music Jump-start your creativity. Definitions. Sound Therapy and well-being: some scientific studies. According to the Guardian, Sound Therapy “believe that our bodies contain ‘energy frequencies’ and that sonic frequencies can be used to reattune these energies when they go off key. 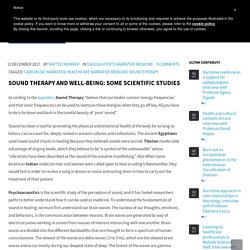 All you have to do is lie down and bask in the tuneful beauty of ‘pure’ sound”. Sound has been a tool for promoting the physical and emotional health of the body for as long as history can account for, deeply rooted in ancient cultures and civilizations. The ancient Egyptians used vowel sound chants in healing because they believed vowels were sacred. Tibetan monks take advantage of singing bowls, which they believe to be “a symbol of the unknowable” whose “vibrations have been described as the sound of the universe manifesting.”. Overview - Sound Healing Classes, Sound Therapy Classes. Sound Healing CDs and books, new age music. Schéma des fréquences de résonance du corps humain. « TPE : Schéma des fréquences de résonance du corps humain. SOUND HEALING. Didgeridoo - the healing sound of the didgeridoos. Sound waves A wave is a transfer of energy from one point to another without the transfer of material between the two points. 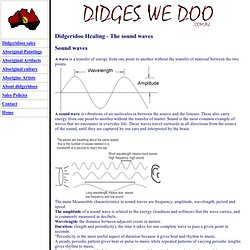 A sound wave is vibrations of air molecules in between the source and the listener. These also carry energy from one point to another without the transfer of matter. Sound is the most common example of waves that we encounter in everyday life. These waves travel outwards in all directions from the source of the sound, until they are captured by our ears and interpreted by the brain. The main Measurable characteristics in sound waves are frequency, amplitude, wavelength, period and speed.The amplitude of a sound wave is related to the energy (loudness and softness) that the wave carries, and is commonly measured in decibels.Wavelength: the distance between adjacent crests in meters. Cymatic Sound Healing. Sound_Healers.