Ever since I saw the movie "Shipwrecked" when I was a young girl and saw the main female protagonist teaching the male protagonist to read using a book of poetry and heard that poem, I have been fascinated with the idea of Xanadu. 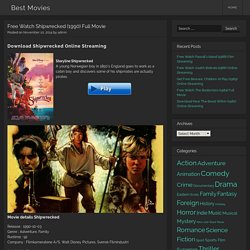 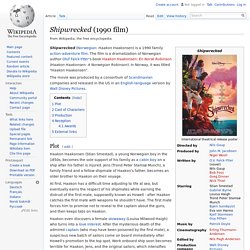 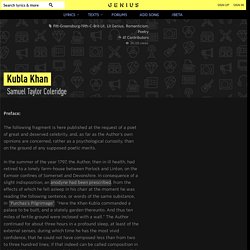 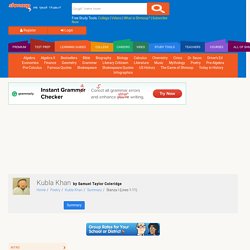 This line gets a lot of work done quickly. Kubla Khan. Poem[edit] In Xanadu did Kubla Khan A stately pleasure-dome decree: Where Alph, the sacred river, ran Through caverns measureless to man Down to a sunless sea. 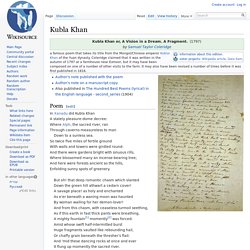 So twice five miles of fertile ground With walls and towers were girdled round: And there were gardens bright with sinuous rills, Where blossomed many an incense-bearing tree; And here were forests ancient as the hills, Enfolding sunny spots of greenery. But oh! That deep romantic chasm which slanted Down the green hill athwart a cedarn cover! Kubla Khan. Title page of "Kubla Khan" (1816) "Kubla Khan; or, A Vision in a Dream: A Fragment" /ˌkʊblə ˈkɑːn/ is a poem written by Samuel Taylor Coleridge, completed in 1797 and published in 1816. 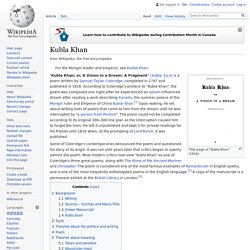 According to Coleridge's Preface to "Kubla Khan", the poem was composed one night after he experienced an opium-influenced dream after reading a work describing Xanadu, the summer palace of the Mongol ruler and Emperor of China Kublai Khan.[1] Upon waking, he set about writing lines of poetry that came to him from the dream until he was interrupted by a person from Porlock. The poem could not be completed according to its original 200–300 line plan as the interruption caused him to forget the lines. He left it unpublished and kept it for private readings for his friends until 1816 when, at the prompting of Lord Byron, it was published.

Background[edit] Writing[edit] Sources – Purchas and Marco Polo[edit] Kubla Khan by Samuel Taylor Coleridge. Photos: The Legendary City of Xanadu. A team of archaeologists are excavating the site of Xanadu, a legendary city that flourished between 1256 and 1368. 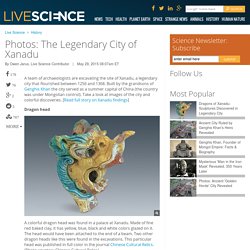 Built by the grandsons of Genghis Khan the city served as a summer capital of China (the country was under Mongolian control). Take a look at images of the city and colorful discoveries. [Read full story on Xanadu findings] Dragon head. Site of Xanadu. Site of Xanadu North of the Great Wall, the Site of Xanadu encompasses the remains of Kublai Khan’s legendary capital city, designed by the Mongol ruler’s Chinese advisor Liu Bingzhdong in 1256. 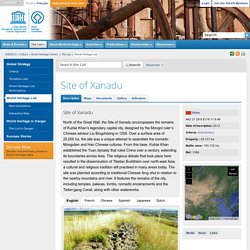 Over a surface area of 25,000 ha, the site was a unique attempt to assimilate the nomadic Mongolian and Han Chinese cultures. From this base, Kublai Khan established the Yuan dynasty that ruled China over a century, extending its boundaries across Asia. The religious debate that took place here resulted in the dissemination of Tibetan Buddhism over north-east Asia, a cultural and religious tradition still practised in many areas today. The site was planned according to traditional Chinese feng shui in relation to the nearby mountains and river. Ancient Xanadu still amazes. Stunning dragon heads found at ancient summer palace of Xanadu. Ancient Xanadu still amazes - chinaculture. In the Merriam-Webster Dictionary, "Xanadu" means an idyllic, exotic, or luxurious place. 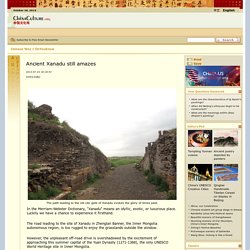 Luckily we have a chance to experience it firsthand. The road leading to the site of Xanadu in Zhenglan Banner, the Inner Mongolia autonomous region, is too rugged to enjoy the grasslands outside the window. INNER MONGOLIA (Hohhot, Xanadu, Gobi Desert) Inner-Mongolia INNER MONGOLIA is a Chinese province that shares the vast Gobi desert and an immense area of dusty grassland with the country of Outer Mongolia to the north. 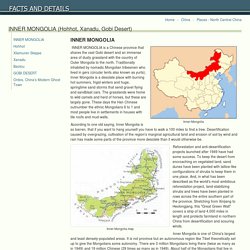 Traditionally inhabited by nomadic Mongolian tribesmen who lived in gers (circular tents also known as yurts), Inner Mongolia is a desolate place with burning hot summers, frigid winters and huge, springtime sand storms that send gravel flying and sandblast cars. The grasslands were home to wild camels and herd of horses, but these are largely gone. These days the Han Chinese outnumber the ethnic Mongolians 6 to 1 and most people live in settlements in houses with tile roofs and mud-walls. According to one old saying, Inner Mongolia is so barren, that if you want to hang yourself you have to walk a 100 miles to find a tree. Inner Mongolia mapReforestation and anti-desertification projects launched after 1949 have had some success.

Inner Mongolia is one of China's largest and least densely-populated areas. Hohhot. Shangdu. Coordinates: Shangdu (here spelled Ciandu, as Marco Polo spelled it) on the French map of Asia made by Sanson d'Abbeville, geographer of King Louis XIV, dated 1650. It also shows a Xandu east of Cambalu, where English maps placed it. Like some other European maps of the time, this map shows Cambalu and Pequin as two different cities, but they were in fact the same city, now called Beijing.

When this map was made, Shangdu had been in ruins for almost three centuries. Description[edit] Kubla Khan - UI Victorian Wiki - UIowa Wiki. The Preface. The Site of Xanadu, Shangdu, Xilingol,Inner Mongolia World Heritage. The Site of Xanadu (Shangdu,元上都) nestles in Shangdu Town, Jinlianchuan Grassland (Golden Lotus Grassland, 金莲川草原), Xilingol, Inner Mongolia. During the 13th to the 14th century, it was the first capital of Kublai Khan, the Summer Palace of Yuan Dynasty and the most splendid international metropolis in the world.

Together with Dadu(Beijing), they form China's White House. Distinguished as the earliest, most ancient and best preserved city set up during Yuan Dynasty (1206-1368), it is also a living example of how two total different cultures: agrarian culture and nomadic culture clashed before enriching each other. To the Mongolian people, this place evoking their sense of national identity, is holy and irreplaceable. Map ; Xanadu , ancient eastern China. Xanadu. Xanadu: The language and translation wizard. About Xanadu Click to download Xanadu for free Xanadu is the free language and translation wizard by Foreignword which helps you find a way through the language and translation "jungle".