How Silence Works: Emailed Conversations With Four Trappist Monks. About two months ago I started reaching out by email to a group of people whose lives I wanted to know about and understand: The Trappist monks of Oka Abbey, in Quebec. 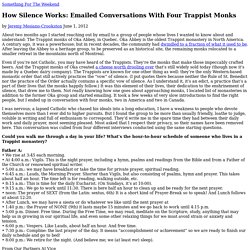 Oka Abbey is the oldest Trappist monastery in North America. A century ago, it was a powerhouse; but in recent decades, the community had dwindled to a fraction of what it used to be. After leaving the Abbey to a heritage group, to be preserved as an historical site, the remaining monks relocated to a smaller retreat in the mountains north of Montreal. Vow of Silence – Practice and Benefits. The organ of speech seriously distracts the mind. ”Speech is the fourth ‘foot’ of Mind-Soul, because it is by means of the ‘foot’ of speech that the mind approaches the notable objects such as cow, goat, etc. 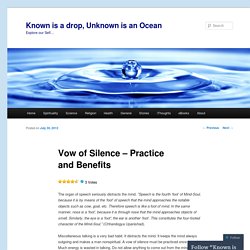 Therefore speech is like a foot of mind. In the same manner, nose is a ‘foot’, because it is through nose that the mind approaches objects of smell. Similarly, the eye is a ‘foot’; the ear is another ‘foot’. This constitutes the four-footed character of the Mind-Soul.” (Chhandogya Upanishad). Miscellaneous talking is a very bad habit. Spiritual aspirants must observe Silence for some hours daily. The 5 Transformations You Experience When You Take a Vow of Silence.

A vow of silence (mauna) has one main focus — to awaken awareness. 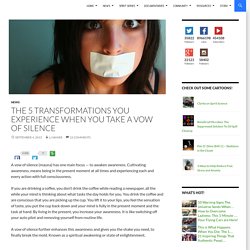 Cultivating awareness, means being in the present moment at all times and experiencing each and every action with full consciousness. If you are drinking a coffee, you don’t drink the coffee while reading a newspaper, all the while your mind is thinking about what tasks the day holds for you. You drink the coffee and are conscious that you are picking up the cup. You lift it to your lips, you feel the sensation of taste, you put the cup back down and your mind is fully in the present moment and the task at hand.

By living in the present, you increase your awareness. A vow of silence further enhances this awareness and gives you the shake you need, to finally break the mold. 1. Without others we have no definition of ourselves. Scare Yourself Every Day. « « #154 See Her Again | #156 Go to Catholic Sunday Mass » » 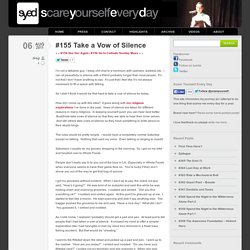 How to Remain Silent for a Whole Day - 7 Easy Steps. Edit Article. 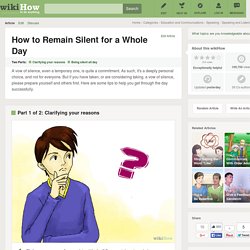 Taking a Temporary Vow of Silence - latimes. GOFFSTOWN, N.H. — The anonymous white walls of my cell were bare except for a crucifix. 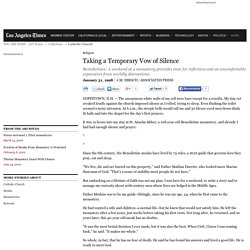 My tiny cot creaked loudly against the church-imposed silence as I rolled, trying to sleep. Even flushing the toilet seemed a noisy intrusion. At 6 a.m., the steeple bells would call me and 30 bleary-eyed men down dimly lit halls and into the chapel for the day's first prayers. It was 12 hours into my stay at St. Anselm Abbey, a 108-year-old Benedictine monastery, and already I had had enough silence and prayer. Since the 6th century, the Benedictine monks have lived by 73 rules, a strict guide that governs how they pray, eat and sleep. "We live, die and are buried on this property," said Father Mathias Durette, who looked more Marine than man of God. My Vow of Silence (And Why You Should Try a Silent Vacation) If you have ever thought about taking a vow of silence and wondered what you might need to consider, then you’ve landed on the right heli-pad. 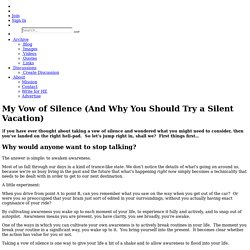 So let’s jump right in, shall we? First things first… Why would anyone want to stop talking? The answer is simple: to awaken awareness. What is a Vow of Silence? (with pictures) A vow of silence is a personal, voluntary oath to refrain from speaking. 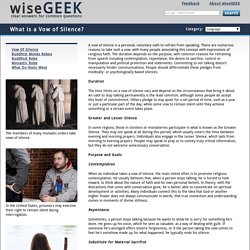 There are numerous reasons to take such a vow, with many people associating this concept with expressions of religious faith. The duration depends on the purpose, with common reasons for refraining from speech including contemplation, repentance, the desire to sacrifice, control or manipulation and political protection and statements. Committing to not talking doesn't necessarily hinder communications.

Silence Is Not a Vow. "There are times when good words are to be left unsaid out of esteem for silence. 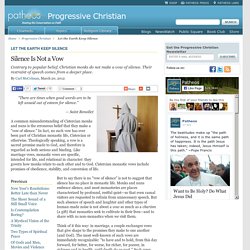 " -- Saint Benedict A common misunderstanding of Cistercian monks and nuns is the erroneous belief that they make a "vow of silence. " In fact, no such vow has ever been part of Christian monastic life, Cistercian or otherwise. Choosing Voluntary Simplicity. What is Voluntary Simplicity? Living the Vow of Poverty in a Privileged Society. I have been meditating on the Vow of Poverty this morning after receiving a question about discerning a call to religious life and encountering the question of privilege. 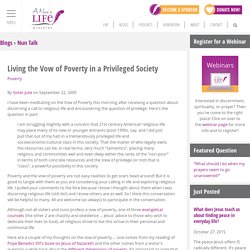 Here’s the question in part: I am struggling mightily with a concern that 21st century American religious life may place many of its new or younger entrants (post-1990s, say, and I did just pull that out of my hat) in a tremendously privileged life and socioeconomic/cultural class in this society. That the matter of who legally owns the resources can be, in real terms, very much “semantics”, placing many religious and communities well and even deep within the ranks of the “non-poor” in terms of both concrete resources and the stew of privilege (or not) that is “class”, a powerful possibility in this society. Poverty and the vow of poverty are not easy realities to get one’s head around! Index. Monastic Monday: Monastic Vows/Practices Part 1: Simplicity. In the next few weeks I hope to post about several of the common/general monastic vows.

Many of the Western Monastic traditions are characterized by similar monastic vows, for example: obedience and chastity. There are also common practices, such as daily prayer, study, acts of service, and hospitality. I hope to explore these are more in the following weeks. Today’s focus will be on the Benedictine vow of simplicity. St. Peace Pilgrim: :Living the Simple Life" - Reviews. Mildred Lissette Norman 1908-1981) began walking for peace, calling herself "Peace Pilgrim" in 1953, and spent the rest of her life without possessions other than what she wore or carried.

Though not a hermit, being an outspoken activist frequently invited to speak at college campuses, church groups, and to the media, she lived in moneyless simplicity like a sadhu. Often quoted is her statement describing her vow to "remain a wanderer until mankind has learned the way of peace, walking until given shelter and fasting until given food. " This book is available free for download or print from Reprinted with permission is Chapter 5 (pages 51-58) titled "Living the Simple Life. " Peace Pilgrim: Her Life and Works in Her Own Words. Chapter 5: "Living the Simple Life"

Exploring the Tremendous Value of a Vow of Simplicity. Radical Honesty. I recently ran across this interesting article about Radical Honesty, a movement founded by a psychotherapist named Brad Blanton who suggests that we should kick our addiction to lying and just tell the complete truth all the time. I also like this quote from the Wikipedia article on Radical Honesty: "The significant majority of participants in the Radical Honesty workshops report dramatic changes in their lives after taking the course, though they are not always comfortable and positive. " The movement visibly suffers from having been founded by a psychotherapist - it's more about the amazing happiness that absolute truth-telling can bring to your relationships (!!)

Rather than such rationalist values as seeking truth by teaching yourself a habit of honesty, or not wishing to deceive others because it infringes on their autonomy. Communicate directly and stop lying. The Truth About Being Honest. ~ Sara Rodriguez. Honesty. Why is it painted in such a muddy color, strapped by taboo circumstance? Is it because we are encouraged to speak, act and feel honestly at all times without considering the framework? Tell No Lies: Would You Take a Vow of Honesty? Two Years To No Lies — TheLi.st @ Medium.

I didn’t realize how often I lied until I stopped lying completely. It wasn’t an intentional decision. Two summers ago I did my first ten-day silent meditation retreat, and we were required to sign five vows to join the program, including a vow of honesty. I didn’t know this until I arrived. Vow of honesty - Realm of Adventure Wiki - Wikia. You have taken a sacred vow to speak no lies. Requiments Edit. Vows, Oaths, and Honesty sermon, Vows, Oaths, and Honesty sermon by Justin Miller, Matthew. Amazing Wedding Vows. 12 Honest Vows You Won't Hear at a Wedding. Pinterest. Theknot. Steal these wedding vows. A week ago I went into a bookstore looking for something that would make me feel OK for having "weird" notions about what I wanted my wedding to be like. I found Offbeat Bride! Vows Video Channel. 1ST VOWS.