A relatively unplumbed line (for me) of sociological/psychological/criminological study in which I have always had an interest. This will pull together anything I come across that would enhance my knowledge on the topic.

The Minds of the Kidnap Victims: What Comes Next. Abduction is a singularly grotesque transaction. 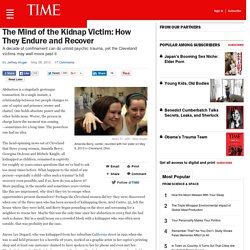 In a single instant, a relationship between two people changes to one of captor and prisoner, owner and chattel. One holds absolute power and the other holds none. Worse, the person in charge knew the moment was coming—sometimes for a long time. 'Less Than Human': The Psychology Of Cruelty. Less Than Human: Why We Demean, Enslave, and Exterminate OthersBy David Livingstone SmithHardcover, 336 pagesSt. 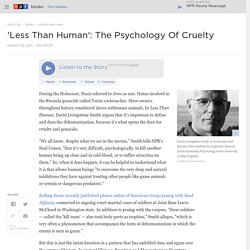 Martin's PressList price: $24.99 Before I get to work explaining how dehumanization works, I want to make a preliminary case for its importance. So, to get the ball rolling, I'll briefly discuss the role that dehumanization played in what is rightfully considered the single most destructive event in human history: the Second World War. More than seventy million people died in the war, most of them civilians. Millions died in combat. Let's begin at the end. Principal prosecutor Telford Taylor began his opening statement with these somber words:

A Society of Victims. During my solo world sail, I visited Sri Lanka, a very pretty but troubled country near India. 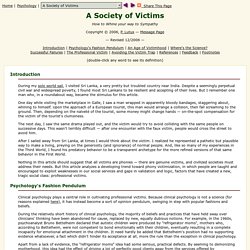 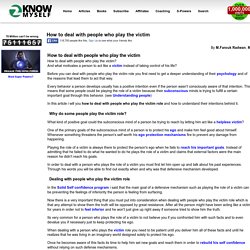 And what motivates a person to act like a victim instead of taking control of his life? Before you can deal with people who play the victim role you first need to get a deeper understanding of their psychology and of the reasons that lead them to act that way. Every behavior a person develops usually has a positive intention even if the person wasn't consciously aware of that intention. This means that some people could be playing the role of a victim because their subconscious minds is trying to fulfill a certain important goal through this behavior. (see Understanding people) In this article i will you how to deal with people who play the victim role and how to understand their intentions behind it. Why do some people play the victim role? Victim Psychology - Research, Typologies and More. Interesting Info -> Psychology -> Victim Psychology Crime, Blame, Psychology & Co-Dependence - Articles and Books I've found some really great articles on the subject of victim psychology, so I decided to make an index page here for my visitors to easily navigate. 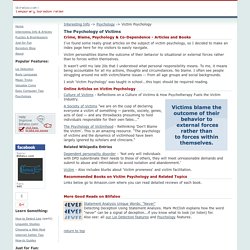 Victim personalities blame the outcome of their behavior to situational or external forces rather than to forces within themselves. It wasn't until my late 20s that I understood what personal responsibility means. To me, it means being accountable for all my actions, thoughts and circumstances. I wish 'Victim Psychology' was taught in school...this topic should be required reading. Health Psychology Consultancy. I have been writing a personality column for Natural Health, where each month I provide some insight into different personalities. 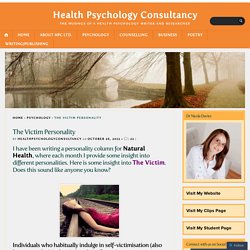 Here is some insight into The Victim. Does this sound like anyone you know? Individuals who habitually indulge in self-victimisation (also known as playing the victim) do so for various reasons: to control or influence other people’s thoughts, feelings and actions; to justify their abuse of others; to seek attention; or, as a way of coping with situations. Although they can actually change circumstances to avoid being victimised, they won’t seize the opportunity because they want to play the role and appear as victims to others and themselves.

The main identifying traits of those who choose to play the victim role include: Psychology of Victimhood, Don't Blame the Victim, Article by Ofer Zur, Ph.D. Abstract The psychology of victims and the dynamics of victimhood have been largely ignored by scholars and clinicians. 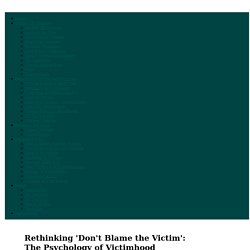 While in past years the tendency has been to blame victims, more recently the tide has turned. It is now politically incorrect to explore the role of victims in violent systems, as exploring the psychology of victims has become synonymous with blaming the victim. Offender%20Profiling%20and%20Differentiation. Victim Profiling by on Prezi. Murder is Everywhere: Victim Profiling... As crime writers we spend a lot of our time thinking about murder and murdering. 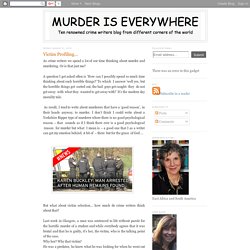 Or is that just me? A question I get asked often is 'How can I possibly spend so much time thinking about such horrible things? ' To which I answer 'well yes, but the horrible things get sorted out, the bad guys get caught- they do not get away with what they wanted to get away with! ' It’s the modern day morality tale. What Is Criminal Profiling And Why It Is Important. Profiling is the identification of specific characteristics of an individual committing a particular crime by a thorough systematic observational process and an analysis of the crime scene, the victim, the forensic evidence, and the known facts of the crime. 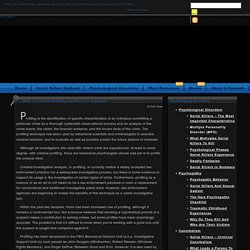 The profiling technique has been used by behavioral scientists and criminologists to examine criminal behavior, and to evaluate as well as possibly predict the future actions of criminals. Although all investigators who deal with violent crime are experienced, at least to some degree, with criminal profiling, there are behavioral psychologists whose sole job is to profile the criminal mind. Victim Profiling, Part One. Sean Mactire’s book, Malicious Intent: A Writer’s Guide to How Murderers, Robbers, Rapists, and Other Criminal Think, contains useful information for creating more believable antagonists and victims. 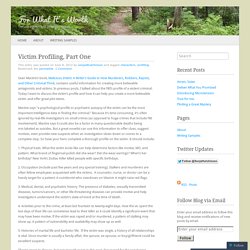 In previous posts, I talked about the FBI’s profile of a violent criminal. 50423 ch 2. Forensics: Profiling the Perpetrator. If you don't know what you're looking for, finding it is nearly impossible. Profiling, or looking at evidence and making a best guess as to the type of individual who would commit the crime in question, helps investigators get a firm grasp on whom it is they're trying to track down. The profiler, usually a specially trained FBI agent,looks at the crime scene, autopsy data, victim, and likely precrime and postcrime behaviors of the killer to make this assessment. The profiler answers questions like: How did the killer gain access to the victim? Criminal profiling from crime scene analysis. Biblical Answers for the Problems, Treatment, and Counseling of Victim Mentality - Website of faiththerapy! When our needs for love, security, worth, or significance are not met, we attempt to meet these needs through depending on ourselves, relying on others, trying to control others, or using substances or things to make us happy.

Today, in the recovery movement, this is called codependency. This term was originally coined to refer to a person married to an addict who was somehow dependent on the addict continuing to drink or use drugs. However, this excessively dependent or independent pattern is now recognized to be much more widespread in our society and has been identified as the underlying cause of numerous other problems. Probably everyone in our society has a number of codependent characteristics, but for at least one-fourth or more of our population, these characteristics have become a predominant pattern of coping that result in dysfunctional relationships. Victim Mentality - Codependent Relationship Avoidance. Richard Parncutt: Victim Mentality and Politics.

Victim mentality (VM) can explain a lot of cruel and crazy things that happen in politics at every level, from personal relationships right up to globalisation. It may even explain why humanity is having such trouble solving such basic problems as global poverty and global warming. If that is true, it may be worthwhile having a detailed look at VM. Are You A Victor or Victim? 12 Signs You Have The Victim Mentality. When was the last time you spent a day or two being the victim?

Was it that you wanted something, and it just didn’t go your way or did someone hurt your feelings? If that’s you, do not even start feeling bad about it. We are all guilty of playing the victim at some point in our lives. You like most of us react the same way when our feelings get hurt. Profile. The Victim Mentality. Doc. Strategies to Deal with a Victim Mentality. Victim Precipiation Paper for Website.