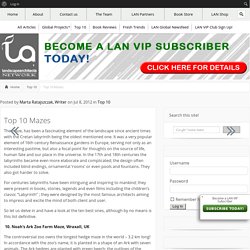 It was a very popular element of 16th century Renaissance gardens in Europe, serving not only as an interesting pastime, but also a focal point for thoughts on the source of life, human fate and our place in the universe. In the 17th and 18th centuries the labyrinths became even more elaborate and complicated; the design often included blind endings, ornamental ‘rooms’ or even pools and fountains. They also got harder to solve. For centuries labyrinths have been intriguing and inspiring to mankind; they were present in books, stories, legends and even films including the children’s classic “Labyrinth” ; they were designed by the most famous architects aiming to impress and excite the mind of both client and user. 10. 9. 8. 7. 6.

The Lost Egyptian Labyrinth: more impressive than the Pyramids. According to the 5th-century BC Greek historian Herodotus, who stated that he himself had seen the building, the Egyptian Labyrinth was a vast structure on the shores of a large lake located seven days' journey up the Nile from the Pyramids at Giza. 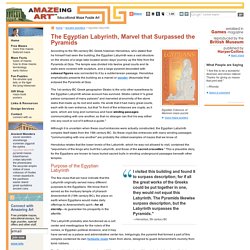 The temple was divided into twelve great courts and its walls were covered with sculpture, and a large pyramid decorated with colossal figures was connected to it by a subterranean passage. Herodotus emphatically presents the building as a marvel or wonder (thaumata) that eclipsed the Pyramids at Giza. The 1st century BC Greek geographer Strabo is the only other eyewitness to the Egyptian Labyrinth whose account has survived. Strabo called it "a great palace composed of many palaces" and marveled at enormity of the stone slabs that made up its roof and walls. Although it is uncertain when these court entrances were actually constructed, the Egyptian Labyrinth complex itself dates from the 19th century BC. The History of Mazes. Amazing Mazes They can be as simple as a game in a child's coloring book, or as enveloping as a house of mirrors. 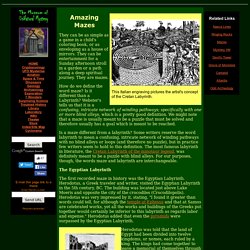 They can be entertainment for a Sunday afternoon stroll in a garden or a path along a deep spiritual journey. They are mazes. How do we define the word maze? 15 of the Most Amazing Mazes and Labyrinths. Labyrinths and mazes can be found around the world and they are important cultural works, offering rich insights into our history and the human psyche. 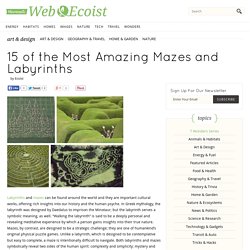 In Greek mythology, the labyrinth was designed by Daedalus to imprison the Minotaur; but the labyrinth serves a symbolic meaning, as well. “Walking the labyrinth” is said to be a deeply personal and revealing meditative experience by which a person gains insights into their true nature. Mazes, by contrast, are designed to be a strategic challenge; they are one of humankind’s original physical puzzle games. Unlike a labyrinth, which is designed to be contemplative but easy to complete, a maze is intentionally difficult to navigate. Both labyrinths and mazes symbolically reveal two sides of the human spirit: complexity and simplicity; mystery and design; intuition and sensory experience. Dole Plantation (Image via cosmickid99) 7 labyrinths worth exploring. The wonder of travel lies equally with adventure and misadventure -- there is nothing like getting thoroughly lost in a riddling country or culture that is not your own. 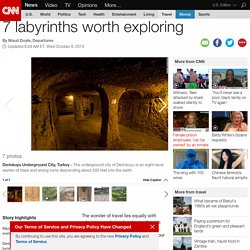 But it is hard these days, with our ultra-planned excursions, fixers and 4G service, to get properly disoriented. Labyrinths, however, can remind us how it's done. These mazes have appeared in various corners of the world throughout history. One can be found in a petroglyph on a river shore in Goa, India; cut into the stones of Ireland's many medieval churches; and arranged in a contemporary land-art installation at Lands End in San Francisco. Traditionally, they kept evil in and invaders out. Classical thinkers Herodotus, Pliny and Strabo each praised the Egyptian maze of Middle Kingdom that Pharaoh Amenemhat III constructed in the 19th century B.C. to protect his Hawara tomb.

Before taking to the high seas, Scandinavian sailors built stone labyrinths to trap sinister winds that might follow them. 10 Most Incredible Mazes and Labyrinths. Labyrinths. Updated 21 April 2006 Unlike mazes, labyrinths have a single path, no dead ends, and one way in and out. 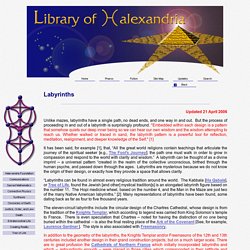 But the process of proceeding in and out of a labyrinth is surprisingly profound. "Embedded within each design is a pattern that somehow quiets our deep inner being so we can hear our own wisdom and the wisdom attempting to reach us. Amazing Maze: What Science Says About Solving Labyrinths. From the twists and turns of the labyrinth in the Greek myth of Theseus and the Minotaur, to the treacherous network of hedges in Stanley Kubrick's The Shining, mazes have an unmistakable and mysterious allure. 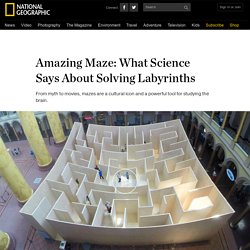 But mazes—a complex network of passages through which one has to find a way—have a life beyond the plot lines of ancient myth. They exist in scientific laboratories and even, it can be said, in the form of our route home from work. We asked James Olds, a neuroscientist and director of the Krasnow Institute for Advanced Study at George Mason University in Fairfax, Virginia, to shed some light on the science of solving mazes. As a neuroscientist, how do you define a maze? A maze is something that other humans have created that acts as a challenge to one of our most important skills: the ability to create an ecocentric cognitive map of our environment and to navigate through that cognitive map. Both your parents were also neuroscientists. It's "the family business. " Labyrinths in Public Places. 8 Ancient Labyrinths to Quiet Your Mind. Labyrinths are ancient symbols found all over the world, linked to legend, religion or myth. 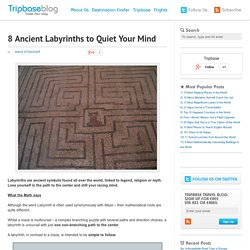 Lose yourself in the path to the center and still your racing mind. What the Math says Although the word Labyrinth is often used synonymously with Maze – their mathematical roots are quite different. The Ancient Stone Labyrinths of Bolshoi Zayatsky. On a small collection of remote islands in the White Sea of Russia lies the highest concentration of ancient labyrinths on the planet. 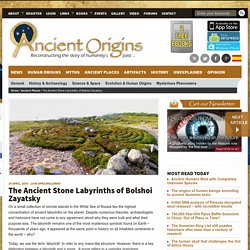 Despite numerous theories, archaeologists and historians have not come to any agreement about why they were built and what their purpose was. The labyrinth remains one of the most mysterious symbols found on Earth – thousands of years ago, it appeared at the same point in history on all inhabited continents in the world – why? Today, we use the term ‘labyrinth’ to refer to any maze-like structure.

23 Amazing Labyrinths To Get Lost In. Labyrinths across the U.S. Discover Labyrinths LLC. Welcome to the Labyrinthos Homepage. Mazes or Labyrinths ? Terracotta Angel, c.1896Watts Chapel, England Photo ©: Jeff Saward/Labyrinthos Please note, the contents of this website are © 2016 Labyrinthos unless stated otherwise.Please contact us for permission to reproduceany text or images. 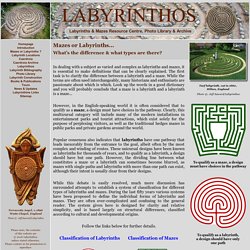 The Labyrinth: Walking Your Spiritual Journey. "Your life is a sacred journey. And it is about change, growth, discovery, movement, transformation, continuously expanding your vision of what is possible, stretching your soul, learning to see clearly and deeply, listening to your intuition, taking courageous challenges at every step along the way. You are on the path... exactly where you are meant to be right now...

Labyrinths are thought to enhance right brain activity. The Classical Seven Circuit Labyrinth in this example shows that you enter a labyrinth. Mazes and Labyriths Index. Sacred Texts Miscellaneous Buy this Book at Amazon.com Contents Start Reading Page Index Text [Zipped] Title PagePrefaceContentsList of IllustrationsChapter I. IntroductionChapter II. Labyrinths: Ancient Aids for Modern Stresses. More than a relaxing pastime, walking a labyrinth can be good for your health, too.