This Generation’s R&B Music is Asswater. Stop Paying For It. A couple weeks ago, while driving to Ann Arbor for the homecoming of my alma mater University of Michigan, Donny Hathaway’s “A Song For You” popped up on the shuffle. 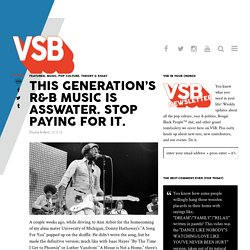 He didn’t write the song, but he made the definitive version; much like with Isaac Hayes’ “By The Time I Get to Phoenix” or Luther Vandross’ “A House is Not a Home,” there’s no need to even bump the original. I’m a voracious consumer of all genres of music that aren’t Country, and I have nearly 23,000 songs in my iTunes playlist. “A Song For You” is maybe one of a dozen or so for which listening to it is like the first time, every time. Hathaway’s tenor gliding over the plaintive piano makes me feel like cartoon cherubs and hummingbirds are carrying me over a blanket of clouds as a sun with a smiley face beams down on me on a perfect Saturday afternoon. The song came out in 1971 – a full decade before my mama shat me out – and it’s entirely possible that it will one day resonate with any seed I may have as it has with me. Universal Love, Said The Cactus Person. 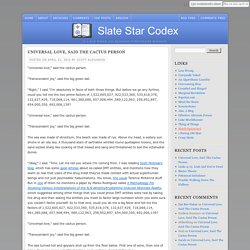 “Transcendent joy,” said the big green bat. “Right,” I said “I’m absolutely in favor of both those things. This Is My Jam. We are not strangers There’s an eternal league table on the internet, and somewhere there’s you on it, and there’s me. 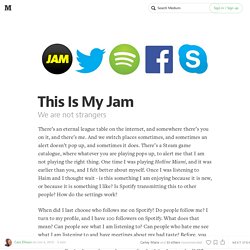 And we switch places sometimes, and sometimes an alert doesn’t pop up, and sometimes it does. There’s a Steam game catalogue, where whatever you are playing pops up, to alert me that I am not playing the right thing. One time I was playing Hotline Miami, and it was earlier than you, and I felt better about myself. Once I was listening to Haim and I thought wait - is this something I am enjoying because it is new, or because it is something I like? When did I last choose who follows me on Spotify? I guard myself, jealously. Sometimes the internet is like Increpare’s sub/conscious, in that once you commit to it it betrays you: you would like to take part but it fools you into thinking you are in control. All this anxiety though, is a social anxiety, and not an internet anxiety. Ted Nugent's Jailbait Problem  Another campaign appearance, another Ted Nugent controversy. 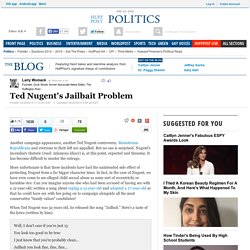 Mainstream Republicans and everyone to their left are appalled. But no one is surprised. Nugent's incendiary rhetoric (read: infamous idiocy) is, at this point, expected and tiresome. It has become difficult to muster the outrage. More unfortunate is that these incidents have had the unintended side effect of protecting Nugent from a far bigger character issue. When Ted Nugent was 32 years old, he released the song "Jailbait. " Well, I don't care if you're just 13You look too good to be trueI just know that you're probably clean...Jailbait you look fine, fine, fine...It's quite alright, I asked your mamaWait a minute, officerDon't put those handcuffs on mePut them on her, and I'll share her with you The albums' next track is titled "I Am a Predator.

" Don't get me wrong. But this one isn't funny -- especially coming from Nugent. That sounds... an awful lot like that line in "Jailbait. " Okay, okay. "Previous relationships. " The Cruel Truth About Rock And Roll : The Record. The Runaways (from left to right, Jackie Fox, Joan Jett, Sandy West, Cherie Currie and Lita Ford) in January 1976. 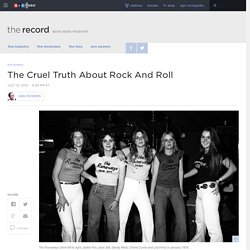 Michael Ochs Archives/Getty Images hide caption itoggle caption Michael Ochs Archives/Getty Images The Runaways (from left to right, Jackie Fox, Joan Jett, Sandy West, Cherie Currie and Lita Ford) in January 1976. Michael Ochs Archives/Getty Images Last week, a story about The Runaways' Jackie Fuchs, centered around her account of being raped by the late music entrepreneur Kim Fowley in a motel room full of people on New Year's Eve in 1975, challenged the very idea that rock and roll is something worth loving. Like any secret laid bare after years of only furtive acknowledgment, this one has disrupted many lives and caused reactions ranging from rage to self-righteous moralizing to Fuchs's own remarkably generous forgiveness of those who knew something terrible had happened but didn't directly respond.