This Ivorian Artist Can Sculpt Her Hair Into Anything. Photographer Turns 4,100 Pounds of E-Waste into Surreal Portraits. "German Business Plants": After a failed Kickstarter, German photographer Frederik Busch perseveres to spotlight the secret lives of sad office plants. In a recent standardized science test given to 15-year-olds in 72 countries, there was almost no gap in the scores between boys and girls. 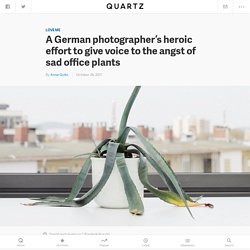 The latest Programme for International Student Assessment (PISA), a test administered by the OECD every three years to more than half a million students, found that boys scored 4 points, or less than 1%, better than girls in science. In the assessment, in 2015, boys outperformed girls in 24 places, with the biggest gaps in Austria, Costa Rica, and Italy. Girls outperformed boys in 22, with Finland, Qatar and Jordan among those with the biggest gaps favoring girls. But the OECD find one notable difference between the sexes: in every single country tested, girls had much higher levels of schoolwork- and test-related anxiety than boys. On average across OECD countries, girls were about 13 percentage points more likely than boys to report they get very tense when they study. 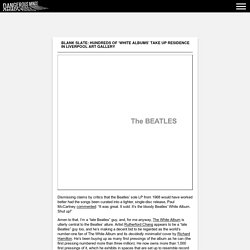 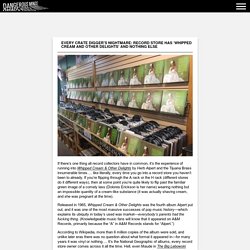 If you’re flipping through the A rack or the H rack (different stores do it different ways), then at some point you’re quite likely to flip past the familiar green image of a comely lass (Dolores Erickson is her name) wearing nothing but an impossible quantity of a cream-like substance (it was actually shaving cream, and she was pregnant at the time). Nose hair extensions are the next hot beauty trend everyone needs to try. Squiggle brows. 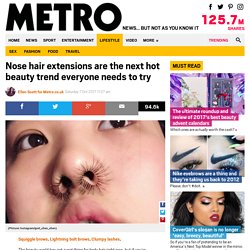 Lightning bolt brows. Clumpy lashes. The beauty world has got a real thing for body hair right now, but if you’re bored of drawing all the focus to your eyes, never fear – there’s another hairy trend you can try. Behold nose hair extensions. Technically they’re not extensions, but false lashes stuck around the rim of each nostril, splayed out to create the effect of super long hair peeking out of your nose. The Coolest Custom Neon Bar Signs in the World - Supercall. Neon has been a part of cocktail culture since 1913, when one of the world’s first neon signs, a spectacular, block-lettered advertisement for a brand of vermouth, radiated from a Paris rooftop. 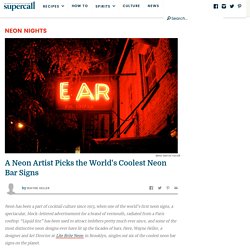 “Liquid fire” has been used to attract imbibers pretty much ever since, and some of the most distinctive neon designs ever have lit up the facades of bars. Here, Wayne Heller, a designer and Art Director at Lite Brite Neon in Brooklyn, singles out six of the coolest neon bar signs on the planet. New York, NY This neon sign falls into the category of what I would deem NYC vernacular, in which you solve design problems by winging it, or using readily available materials (see also: NYC bodega signs). 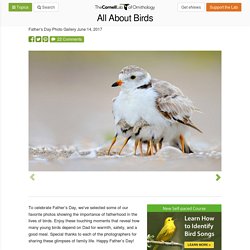 Content Not Found. This old Englishman and his huge vegetables. Print Ain’t Dead in NYC – Narratively. It’s the waning moments of my fourth session with a new therapist. 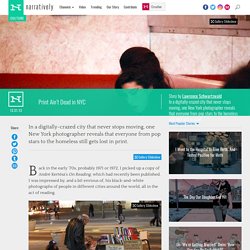 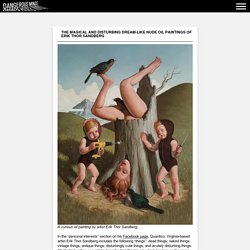 In the “personal interests” section on his Facebook page, Quantico, Virginia-based artist Erik Thor Sandberg includes the following “things”: dead things; naked things; vintage things; antique things; disturbingly cute things, and acutely disturbing things. All of which rather accurately describe Sandberg’s art, which borders on the genre of Magic Realism. The term was first used by art historian and photographer Franz Roh to identify artists operating within that realm following the Post-Expressionism period, a term used to describe artistic movements that occurred following WWI, which was also coined by Roh. Try to look at these photos of doll factories without screaming. What it’s like to be a part of the world’s richest 1 percent, in 15 incredible photos. A man floats in the 57th-floor swimming pool of the Marina Bay Sands Hotel, with the skyline of the Singapore financial district behind him. 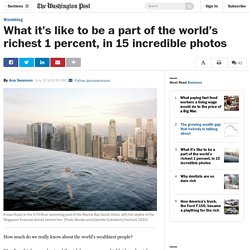 (Paolo Woods and Gabriele Galimberti/Institute 2013) How much do we really know about the world's wealthiest people? We often think we understand the rich because we read tabloids and watch celebrities on TV, says Myles Little, a New York City-based photo editor who has put together a new collection of photographs on the richest 1 percent. But actually, most people know surprisingly little about the world's wealthiest. For example, many people assume the world's top earners are movie stars or athletes — like boxer Floyd Mayweather, who ranked as the top-paid athlete with a respectable $300 million in 2015. Yet the world's top hedge fund manager made far more last year than Mayweather. The Kinky Ink of Apollonia Saintclair. Paintings by Alexandra Rubinstein. The Surreal Photographs of Hugh Kretschmer. Hugh Kretschmer’s photographs are highly conceptual as well as imaginative. 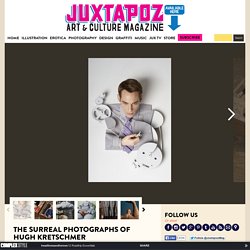 According to Kretschmer, “ My ideas are conjured-up by my dreams and desires of what life could be, if only… They are commentaries on the human condition and seek to embrace the strengths and weaknesses we all share; illustrated through quirk and irony.” Kretschmer’s photographs manage to be playful and surreal while still maintaining thoughtful and dark undertones. His artistic process of some of his work, starting from his original drawings to the end result can be seen in his Tumblr.

His work explores the intersection of being playful and powerful. Hugh Kretschmer was born in Los Angeles and his career has spanned for over two decades. Text by Melissa Welikson. Two Medieval Monks Invent Bestiaries. Previously in this series: Two Monks invent dinner parties. MONK #1: do birds have meetingsMONK #2: absolutely they have a Meeting Hat and everythingMONK #1: what do they have meetings aboutMONK #2: mostly who gets to wear the meeting hat MONK #1: do human women sleep in beds or–MONK #2: no that’s dogs you’re thinking ofMONK #1: right right.

Conventional Wisdom: Anthrocon - Cool Hunting. “This is the highlight of my year,” Thumpie Bunny Eve shared with photographer Arthur Drooker, while sat atop a piano, wearing high heels, exuding sexuality—and wearing a rabbit costume. This was just one scene at Anthrocon, the world's largest convention for anthropomorphics, the humanlike animal characters more commonly referred to as "furries. " Anthrocon is the latest stop on Drooker's Conventional Wisdom tour, during which the photographer has brought his lens—and his audience—into the weird and wonderful world of eccentric conventions, from Santas to sexual explorers. We've been following him for a year now, as he accrues imagery for a book-in-progress, and Anthrocon is most certainly one of the highlights. During the 4 July holiday weekend, furries made their way from around the globe to Pittsburgh's David L. Lawrence Convention Center and, according to Drooker, turned it "into a wild kingdom.

" CityLab. Teenage Wasteland: Photos of rebellious youth in Japan, 1964. Why Dating In SF Is Different Than Anywhere Else. Flickr/dewet Proper dating etiquette is not a thing No one's getting picked up and dropped off at their house for the “date” and there isn't an implied commitment for dinner. Instead, it’ll be more of a, “Hey, wanna grab a drink after work” type of thing and then you’ll Uber there separately and have to awkwardly find each other in the bar and depending on how it goes, maybe get food after a couple of drinks, and then Uber home separately, and yes he is 100% leaving you alone on the sidewalk if his Uber shows up first. The dudes (usually) don’t pay Dudes in the South, and the East, and the North (?) Chivalry is extra dead here It’s not even just dead; it’s been beheaded, burned, and sent out to the ocean on a raft. JOSEPH WOLFGANG OHLERT - Photographing the Drag Queens of San Francisco. Berlin-based photographer Joseph Wolfgang Ohlert recently went to San Francisco to photograph drag queens and trans people for his first book of photos.

By day, Joseph met queens at their homes for quiet portrait sessions. At night, he followed them to such hallowed institutions as Trannyshack, Midnight Sun, the Stud Bar, and Moby Dick to document them in full bloom. 37 Names You Can Give Your Child To Honor Their History. 13+ People Reading Poorly-Chosen Books In Public. Reading is an excellent activity that not nearly enough people engage in regularly, but you should always be aware of what you're reading and where you're reading it. Here's a list of hilarious and awkward photos that will show you why situational awareness is key when reading in public! If you've snapped a photo of a commuter or stranger reading a bizarre book in public, we'd love to see it. And whether or not you have, you can vote for your favorites, too! Show 6 more Add Image Drag Image. My Photos Of Crazy Cat Lovers. Spine-Chilling Photos of Grotesque Clowns (NSFW) Meet The Family: A Series Of Altered Cabinet Cards From 1900s.

Andy Goldsworthy Digital Catalogue: Browse the Catalogue. 20+ Shocking Photos Showing How Bad Pollution In China Has Become. China has some stunningly beautiful natural landscapes, but they may not count for much when, in other parts of the country, pollution runs totally unchecked. I Photograph Abandoned Buildings During My Travels Across Europe. Japanese Sculptor Shows How He Transforms Wood Into Surreal Statues. TheCoolist - The Modern Design Lifestyle Magazine. John Baizley and Baroness. Photographing Thrifting State by State. Juxtapoz Hyperreal: Joel Rea. "Transfiguration” by Ben Hopper. The Haunting Works of Marco Rea. Inspired by dreams, mental inspiration, and the loss of intimacy, the Italian born Marco Rea has been able to keep his works recognizable and original. Till Rabus' Surrealist Sensualism. The photography of Shomei Tomatsu. Dirty Bandits » Yo Yo, Wanna Bang? : Brooklyn Designer Annica Lydenberg.

5 + (- sqrt(1- x^2- (y- abs(x))^2))cos(30((1-x^2-(y-abs(x))^2))), x is from -1 to 1, y is from -1 to 1.5, z is from 1 to 5. 1900-1909 : (2) The elite in platinotypes - Mr. History - Notes towards a theatre of memory. Pin by Fran Columbine on Poetry in Motion. Before it was cool - skateboarding in central park 1965. The Body and Soul of Choi Xooang. Vintage photos of Sideshow circus performers. Just another WordPress.com weblog. Will Cotton’s New Confectionary Paintings of Cotton Candy Skies. Danila Tkachenko / Projects / Escape. Subtly Strange and Dreamy Oil Paintings by Alex Roulette. Dietmar Eckell’s Abandoned Planes. The 38 Most Unexplainable Images On The Web. How We Look When We Look at a Painting. Open Space — Looking at People Looking at Rothko. Michal Pudelka: Girls, Girls, Girls.