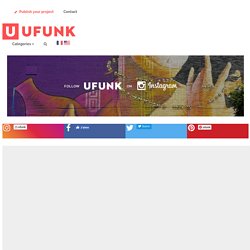 Cal Redback – Treebeard. Articles by Mossless. The Work of James Bullough. The Magical Universe of Silvia Grav. There is a wonderful song by the Swedish indie band Miike Snow called "Silvia," that I sort of wanted to sing when I saw the work of Silvia Grav. 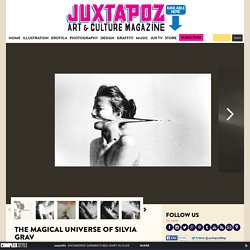 But I don't know her, and I have a policy that I only sing songs to people I know. But when you look at these photographs and surreal treatments by Silvia Grav, you are transported into a different universe. One that may make you sing. Enjoy the works. (some images via) "Washed Up" By Alejandro Durán. Nebraska Siblings Relive Childhood in Hoarding House. Geoff Johnson and his sister Jennifer McShea grew up in the quiet, suburban neighborhood of Bellevue, Nebraska. 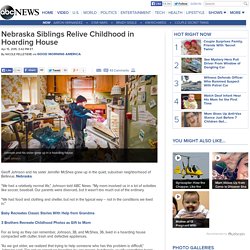 "We had a relatively normal life," Johnson told ABC News. "My mom involved us in a lot of activities like soccer, baseball. Our parents were divorced, but it wasn't too much out of the ordinary. "We had food and clothing and shelter, but not in the typical way -- not in the conditions we lived in. " For as long as they can remember, Johnson, 38, and McShea, 36, lived in a hoarding house compacted with clutter, trash and defective appliances.

"As we got older, we realized that trying to help someone who has this problem is difficult," Johnson said. Hand Sewn portraits by David Catá Does love really has to hurt? 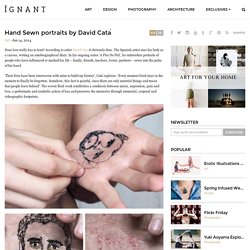 According to artist David Catá it obviously does. The Spanish artist uses his body as a canvas, writing an autobiographical diary. In his ongoing series 'A Flor De Piel', he embroiders portraits of people who have influenced or marked his life – family, friends, teachers, lovers, partners – sewn into the palm of his hand. 'Their lives have been interwoven with mine to build my history', Catá explains. 'Every moment lived stays in the memory to finally be forgotten.

All images © David Catá | Via: designboom. A Woman's Work Is Never Done by Eliza Bennett. "A series of photographic works titled 'A Woman's Work is Never Done' Using my own hand as a base material, I considered it a canvas upon which I stitched into the top layer of skin using thread to create the appearance of an incredibly work worn hand. 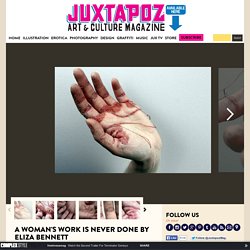 By using the technique of embroidery, which is traditionally employed to represent femininity and applying it to the expression of its opposite, I hope to challenge the pre-conceived notion that 'women's work' is light and easy. Aiming to represent the effects of hard work arising from employment in low paid 'ancillary' jobs, such as cleaning, caring and catering, all traditionally considered to be 'women's work'. 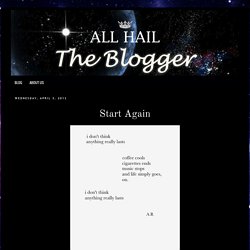 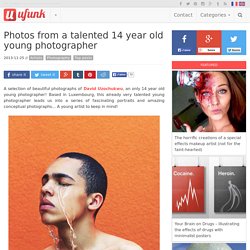 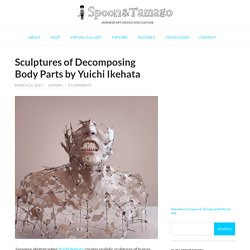 He then photographs the sculptures and merges them into unrealistic worlds to create Long Term Memory (LTM), an ongoing photographic series that “puts audiences in the ambivalent position of not knowing what is real and what is not.” The 40-year old artist currently lives and works in Chiba, Japan. It’s not exactly the type of place you’d imagine Ikehata’s deathly, decomposing imagery come to life. But then again, Ikehata’s understanding of reality comes from small fragments of moments both beautiful and sad. They often come from days when nothing special happens at all.

Photos of Japanese Businessmen Jumping Next to Their Daughters by Yuki Aoyama. Photographer Yuki Aoyama provides a lift-me-up to businessmen across Japan through the simple action of jumping. 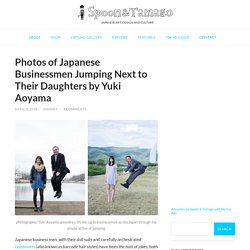 Japanese business men, with their dull suits and carefully orchestrated combovers (also known as barcode hair styles) have been the butt of jokes, both in media and in colloquial chit-chat, for as long as I can remember. Younger generations call them ossan, or boring old man, and ridicule their obedience and lack of independence. There was even a popular comedy sketch that depicted a Japanese business man who gets repeatedly transferred by his company to the most outlandish outposts. But being the slave that he is, he reluctantly accepts each new assignment. In the final episode his company sends him on an Armageddon-like mission to save the planet, obviously without enough fuel to return to earth. Anyway, the story—call it the Parable of Salarymen—has been told many times, with varying aims. Aoyama’s previous series documented Japanese business men jumping by themselves. Dull businessmen jumping next to their daughters is a thing in Japan - Lost At E Minor: For creative people. 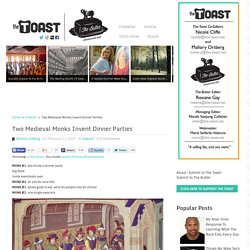 MONK #1: lets throw a dinner party big feast invite everybody overMONK #2: oh yes for sure letsMONK #1: whats good to eat, what do people like for dinnerMONK #2: one single peacock. Artwork by GLENN JONES / GLENNZ TEES - Album on Imgur. Some really great art by John Holcroft - Album on Imgur. Rare Photos Of Gay Couples At A Time When They Were Repressed. Intimate Portraits of ’90s New York City Squatters. During her time as an art student in 1992, Ash Thayer was kicked out of her Brooklyn apartment and found herself living in the See Skwat on New York City’s Lower East Side. Thayer photographed her fellow squatters as they lived and worked to make the community more habitable, learning about demo, electrical work, and more in order to build a home. The images are now part of the fascinating book Kill City: Lower East Side Squatters 1992-2000, the “true untold story of New York’s legendary LES squatters.”

A press release from publisher powerHouse Books explains: New York City in the ‘90s saw the streets of the Lower East Side overrun with derelict buildings, junkies huddled in dark corners, and dealers packing guns. People in desperate need of housing, worn down from waiting for years in line on the low-income housing lists, had been moving in and fixing up city-abandoned buildings since the mid-80s in the LES. Photos: Gay SF in the '70s Was a Lot Cooler Than the Gay SF of "Looking" - The Bold Italic - San Francisco. Mar 13 at 1pm In the late ’70s, a San Francisco photographer named Hal Fischer published two books about gay life in the Castro: Gay Semiotics (1977) and 18th near Castro St. x 24 (1978). Unlike the traditional portraits of Anthony Friedkin’s The Gay Essay or the offhand intimacy of Tom Bianchi’s Fire Island Pines, both of which were also shot in the ’70s, Fischer’s work is a playful, postmodern riff on the very idea of portraiture. His photos tell as much as they show.

This Jarring Photo Series Captures What PTSD Really Looks Like - BuzzFeed News. 1170. Beauty and the grotesque. The creative partnership of artist Jesse Draxler and photographer Jen Whitaker would have been a match made in heaven – that is, if heaven was a darker place. Draxler, a Minneapolis-based artist who has worked in the medium of collage (including 3D) for over five years, has been busy building an impressive portfolio of weirdly sexual and visually challenging images of deconstructed beauty.

Whereas LA-based Whitaker is a photographer and visual designer drawn to monochrome, the illusion of perfection disrupted by flaws and icy dust tones. Looking at their rap sheets, it was only a matter of time until the two found a common ground of shared visual aesthetics, a mutual love for black and an interest in the body; its shapes and place within the picture. Their collaborative series Primer, published exclusively here, combines photography and collage for a captivating visual narrative full of movement, sexuality and darkness.

Julien Mauve’s “After Lights Out” In his series “After Lights Out”, Paris-based photographer Julien Mauve uses blue and black twilight landscapes to explore lone light sources in an attempt to comment on the growing occurrence of light pollution that is slowly infiltrating the darkest parts of the earth. In this moment just after sundown and just before total darkness when everything is still slightly illuminated by the blue twilight haze, Mauve mimics the wide reaching phenomena of man made light. Finding inspiration in photography’s own relationship with light, Mauve creates subtle yet majestic images that provide the viewer with an eerie scene and invites them to investigate the one illumination that Mauve supplies in each photograph.