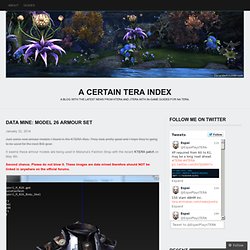 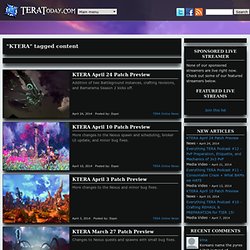 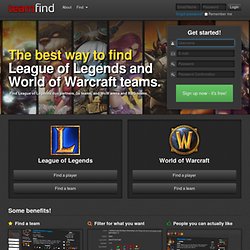 Filter for what you want We help you match up with teams and players that fit exactly what you want - search by ratings, roles, classes, and champions. People you can actually like Use Teamfind's reputation system to track people you enjoy playing with. No bluffing We pull data about everyone's profiles directly from WoW and LoL, so you don't have to worry about people padding their experience. Join a growing community Teamfind's community of 63,390 members provides you with plenty of people to play with Earn your ratings You don't have to deal with shady services that promise you the world. Lolking. Tera. LoLSkill. Supp guide. ADC guide. Surrender at 20. LoL Counter. LeagueOfGiving. LoL Skins. Riot Internship. Summer 2014 internship applications are now closed, but it's not too early to start thinking about 2015. 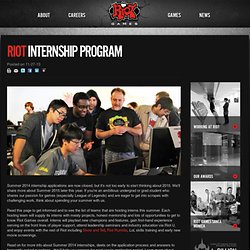 We'll share more about Summer 2015 later this year. If you're an ambitious undergrad or grad student who shares our passion for games (especially League of Legends) and are eager to get into scrapes with challenging work, think about spending your summer with us. Read this page to get informed and to see the list of teams that are hosting interns this summer.

Each hosting team will supply its interns with meaty projects, honest mentorship and lots of opportunities to get to know Riot Games overall. Interns will playtest new champions and features, gain first-hand experience serving on the front lines of player support, attend leadership seminars and industry education via Riot U, and enjoy events with the rest of Riot including Show and Tell, Riot Rumble, LoL skills training and early new movie screenings. The application deadline for summer 2014 internships has passed. A: Maybe. League of Legends. The Binding of Isaac. Trinkets are a new kind of passive item that were introduced in the expansion The Binding of Isaac: Wrath of the Lamb. 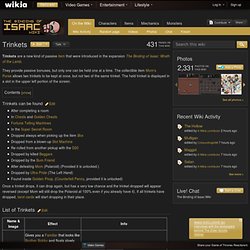 They provide passive bonuses, but only one can be held one at a time. The collectible item Mom's Purse allows two trinkets to be kept at once, but not two of the same trinket. The held trinket is displayed in a slot in the upper left portion of the screen. Trinkets can be found Edit After completing a room In Chests and Golden ChestsFortune Telling MachinesIn the Super Secret RoomDropped always when picking up the item BoxDropped from a blown-up Slot MachineRe-rolled from another pickup with the D20Dropped by killed BeggarsDropped by the Bum FriendAfter defeating Mom (Polaroid) (Provided it is unlocked.)

Once a trinket drops, it can drop again, but has a very low chance and the trinket dropped will appear reversed (except Mom will still drop the Polaroid at 100% even if you already have it). List of Trinkets Edit Gallery Finding two Polaroid trinkets. Trivia.