How personality plays a role in effective leadership. Ginka Toegel and Jean-Louis Barsoux | June 01 2013 | 4:57 PM When executives identify admirable leaders, they often underestimate their struggle with certain elements of their personality. 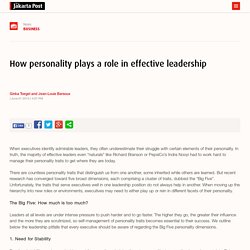 In truth, the majority of effective leaders even “naturals” like Richard Branson or PepsiCo’s Indra Nooyi had to work hard to manage their personality traits to get where they are today. There are countless personality traits that distinguish us from one another, some inherited while others are learned. But recent research has converged toward five broad dimensions, each comprising a cluster of traits, dubbed the “Big Five”. The Big Five: How much is too much? Leaders at all levels are under intense pressure to push harder and to go faster. 1. Emotional stability can be a valuable asset for executives, helping them to cope with stress, setbacks and uncertainty. However, being too fiery or impatient can lead to the opposite result. 2. 3. 4. Your personality can affect your productivity—and salary. Why do some people earn more than others? 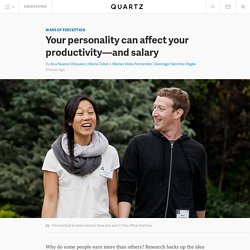 Research backs up the idea that workers with higher educational levels and more experience have higher salaries. And economists would typically explain higher salaries with the argument that these workers are more productive. But there’s more to it than this. Two workers with identical education, experience, gender, and even IQ levels are still quite likely to earn substantially different wages. Personality has a role to play too, with a growing body of research showing how personality is connected to productivity and so-far unexplained wage differences. For instance, studies have shown that more emotionally stable workers earn more money. We recently carried out a study which shows that personality traits such as conscientiousness and neuroticism are significantly related to workers’ productivity. Controlled conditions The result of this study, though, shows that the relationship between earnings and productivity is linked to personality. Are You a Type A or B Personality? 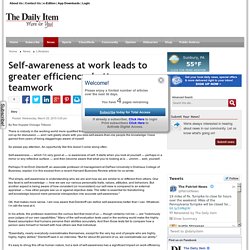 I am the best at it — it’s not up for discussion — and I will gladly share with you less-self-aware-than-me people the knowledge I have gained from years of being staggeringly aware of myself. So please pay attention. An opportunity like this doesn’t come along often. Self-awareness — which I’m very good at — is awareness of self. It starts when you look at yourself — perhaps in a mirror or any reflective surface — and then become aware that what you’re looking at is ... ummm ... well, yourself. Perhaps I’ll let Erich Dierdorff, an associate professor of management at DePaul University’s Driehaus College of Business, explain it in this excerpt from a recent Harvard Business Review article he co-wrote: "Put simply, self-awareness is understanding who we are and how we are similar to or different from others. OK, that makes more sense. Techradar. Apple Watch launches on Friday, April 24 - you can set your friend's inferior Android Wear smartwatch to that release date - and we finally know everything about what's been hiding up Tim Cook's sleeve. 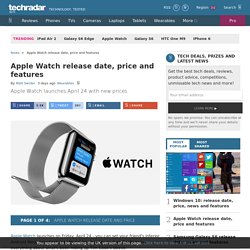 Want to see it in action? Check out our hands on: Apple Watch review It's an iPhone-compatible smartwatch officially dubbed Apple Watch, shedding the fabled iWatch moniker, as the company is focusing on its first chic wearable over geeky tech. To that lavish point, when pre-orders begin on April 10, the Apple Watch price ranges from $349 (£299, AU$499) for the entry-level Sport model to $17,000 (£13,500, AU$24,000) for the top-tier 18-karat gold editions. Apple Management Lessons Every Company Should Steal. How ISIS leader Abu Bakr al-Baghdadi became the world’s most powerful jihadis... Undated file picture released Jan. 29, 2014, by the official Web site of Iraq’s Interior Ministry claiming to show Abu Bakr al-Baghdadi, the head of the so-called Islamic State of Iraq and Syria. 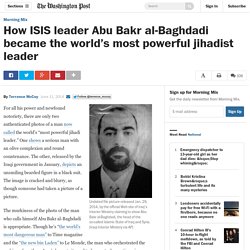 (Iraqi Interior Ministry via AP) For all his power and newfound notoriety, there are only two authenticated photos of a man now called the world’s “most powerful jihadi leader.” One shows a serious man with an olive complexion and round countenance. The other, released by the Iraqi government in January, depicts an unsmiling bearded figure in a black suit. The image is cracked and blurry, as though someone had taken a picture of a picture. The murkiness of the photo of the man who calls himself Abu Bakr al-Baghdadi is appropriate. As long as Brady plays, young Patriots are built to last. From tight end Rob Gronkowski chugging beers to wide receiver Julian Edelman and running back LeGarrette Blount mocking the Seattle Seahawks, the New England Patriots thoroughly enjoyed Wednesday’s Super Bowl XLIX victory parade. 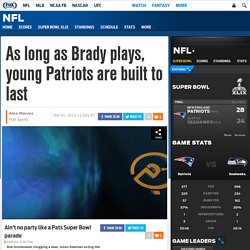 It may not be long before the franchise is celebrating in the streets of Boston once again. With the way their team is built, the Patriots have a legitimate shot at becoming the first back-to-back Super Bowl winner since New England pulled off the repeat during the 2003 and 2004 seasons. Start with roster age. The 2004 Patriots that won Super Bowl XXXIX featured a significant share of graybeards. Eight starters and eight backups who played in New England’s 24-21 win over Philadelphia had at least six years of NFL experience.

By comparison, only nine non-specialists on the 2015 Patriots were veterans of six years or more. The difference in how the Patriots constructed this roster from the 2004 version is especially evident in the linebacker corps. Henri Fayol's Principles of Management - From MindTools.com. Early Management Theory Fayol's "14 principles" were first published in 1914, but are still relevant to today's managers. © iStockphoto/gehringj Today's managers have access to an amazing array of resources which they can use to improve their skills. 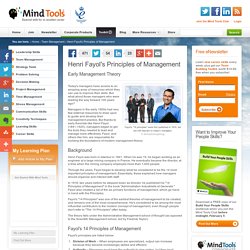 But what about those managers who were leading the way forward 100 years ago? Managers in the early 1900s had very few external resources to draw upon to guide and develop their management practice. Background Henri Fayol was born in Istanbul in 1841. Through the years, Fayol began to develop what he considered to be the 14 most important principles of management. In 1916, two years before he stepped down as director, he published his "14 Principles of Management" in the book "Administration Industrielle et Generale. " Fayol's "14 Principles" was one of the earliest theories of management to be created, and remains one of the most comprehensive. Apps for Education.