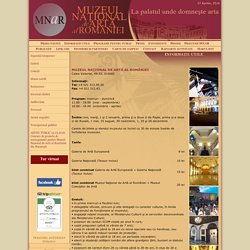 FOOD/DRINK. What It's Like To Live In Bucharest, Romania. While it is true that I tend to speak positively about almost every destination I visit, there’s a simple explanation for that. 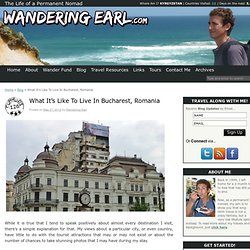 My views about a particular city, or even country, have little to do with the tourist attractions that may or may not exist or about the number of chances to take stunning photos that I may have during my stay. Instead, I formulate my opinions based upon my interactions with local people, my wanderings around random, everyday neighborhoods and my keen interest in trying to ‘feel’ a destination as opposed to simply seeing it. And when travel is approached in this manner, it is, quite frankly, difficult not to enjoy every single destination that one visits. One no longer needs to be ‘wowed’ by a castle or impressed by a museum. National Library of Romania. Biblioteca Naţională a României is the National Library of Romania. 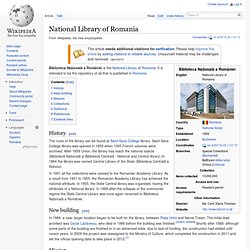 It is intended to be the repository of all that is published in Romania. History[edit] The roots of the library can be found at Saint Sava College library. Saint Sava College library was opened in 1859 when 1000 French volumes were archived. After 1859 Union, the library has reach the national statute (Bibliotecă Naţională şi Bibliotecă Centrală - National and Central library) In 1864 the library was named Central Library of the State (Biblioteca Centrală a Statului). In 1901 all the collections were ceased to the Romanian Academy Library. 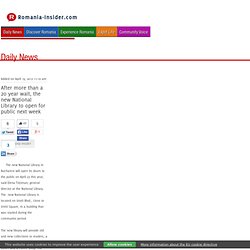 The new National Library is located on Unirii Blvd., close to Unirii Square, in a building that was started during the communist period. The new library will provide old and new collections to readers, a room dedicated to youngsters , a buffet and a coffee shop. The library has organized a public program between April 23 and April 27. ‘ A perspective on culture at the Romanian National Library’ will showcase the work and mission of the national library, as well as extending a bridge to other libraries, museums, archives and cultural centers. April 23 was chosen as grand opening day as it is the International Book and Copyrights Day and the International Day of the Librarian.

The library has seven floors above ground and two below, a 30 meter atrium, glass elevators and glass ceilings and LED lit floors. Going to - Bucharest. Next Stop - Bucharest - A Checkered Past Adds Intrigue to a Bohemian City. Surfacing - Lipscani, a Bucharest District, Struts Again. NAUTILUS - English Books. Manuc's Inn. Manuc's Inn In the area of the present streets of Lipscani and Stavropoleos, there used to be a great number of inns, which were part and parcel of the flourishing commercial world of Bucharest between the 16th and 19th centuries. 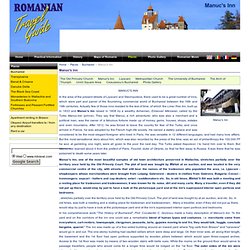 Actually few of those inns resisted to the test of time, of which the Lime-Tree Inn, built up in 1833 and Manuc's Inn raised in 1808 by a wealthy Armenian, Emanuel Mârzaian, called by the Turks Manuc-bei (prince). They say that Manuc, a rich adventurer, who was also a merchant and a political man, was the owner of a fabulous fortune made up of money, gems, houses, shops, estates and even mountains.

After 1812, he was forced to leave the country for fear of the Turks, and once arrived in France, he was adopted by the French high-life society. He owned a stately palace and was considered to be the most elegant foreigner who lived in Paris. . , stretches partially over the territory once held by the Old Princely Court. . Teatrul de Comedie.