Why Bitcoin Makes an Ideal Reserve Currency. From its inception in 2009, Bitcoin spent its first five years in obscurity before coming to light. 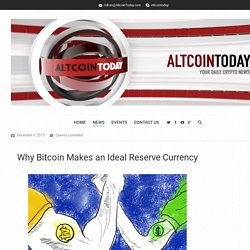 Seven years down the line, it is the most sought after digital currency. Even though Bitcoin is now a widely recognized cryptocurrency, it is still an alternate currency used by less than one percent of the world population. Bitcoin is currently facing the uphill task of fighting against established monetary systems and fiat currencies, which have been around for hundreds of years or more. The main advantage of Bitcoin over existing fiat currencies is its decentralized nature: it is a truly global currency with no one country claiming ownership over it. Even though the current market capitalization of Bitcoin is a small fraction of the current world economy, it has made a huge dent on the established financial sector. Bitcoin is a promising contender when it comes to creating a new international standard of currency.

Source: NewsBTC Related March 16, 2015 In "News" December 30, 2014. OpenLedger: the most powerful crypto-financial platform in the world? This site uses cookies to improve services and experience of readers. 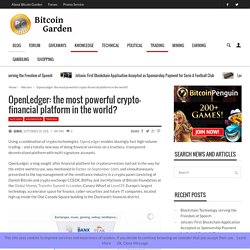 If you decide to continue browsing we consider that you accept their use. Blockchain Technology serving the Freedom of Speech. DECENT is an independent decentralized 3.0 network owned by its users allowing media sharing and ensuring the freedom of speech in order to provide borderless information and data flow while avoiding manipulation, censorship and any third party influence. 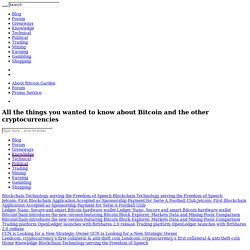 As an open source platform it also enables everyone to build their own application on top of the DECENT protocol. The Freedom of Speech, as one of the basic human rights, is being suppressed nowadays by influence of profit or propaganda oriented corporations, which decide what is going to be presented to public. The established idea of the free world, where all the people live with the same possibilities and access to information, has unobtrusively become just the cover story of the actual reality.

Few powerful individuals and organizations hold the power in their hands but work very hard to let people think, they have the freedom while being kept under the control. ￥34042 - BTCボックス. Exchange Review: BitYes - Digiconomist. BitYes was launched as a subsidiary of Huobi, at the first anniversary of this Chinese exchange in September 2014.

Huobi launched BitYes to specifically target international customers trading in USD. Trades The trading on the exchange is not very special. Users can buy and sell Bitcoin or Litecoin via limit orders only, and these cryptocurrencies can only be traded against USD and not against each other. Market orders, advanced order types or advanced products such as margin and Futures trading are not available. Blockstream. Bitcoin Directory. Giftcoin. BitcoinWisdom - Live Bitcoin/Litecoin charts. 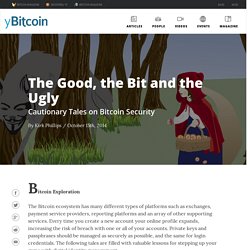 Every time you create a new account your online profile expands, increasing the risk of breach with one or all of your accounts. Private keys and passphrases should be managed as securely as possible, and the same for login credentials. The following tales are filled with valuable lessons for stepping up your game with digital identity management. Gone Phishing Paul Boyer, creator of the “Mad Money Machine” podcast on the “Let’s Talk Bitcoin” network, learned a tough lesson recently. 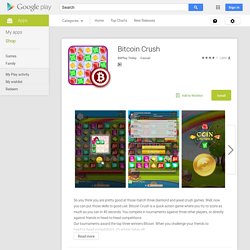 Can you dig it? Join Diggy as you dig through diamonds and unearth special treasures. Epic adventures await you in the lands of Diamond Dale, Turquoise Meringue and beyond. Diggy finds a treasure map, sparking his underground search for gems! Lead Diggy through a world full of diamonds in this wonderful digging adventure! Dig a path by clearing away a group of 3 or more diamonds to reach a target score. Play Games - Win Bitcoin! Oh Crop! Garden Mania 2- Crazy Summer is a new matching puzzle from the makers of hit game Ice Crush! 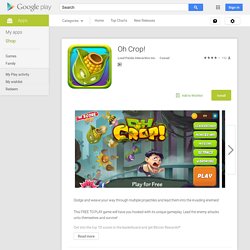 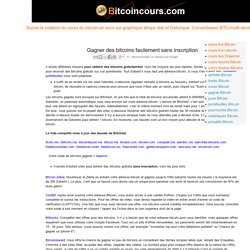 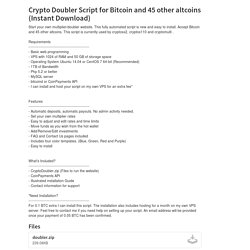 What's Included? *Need Installation? Files. Crypto Scene. Roolo - Buy and Sell Bitcoins quickly and easily. Bitcoin How To Turn into a Bitcoin Millionaire - Bitcoiney Bitcoin Directory. This write-up will display the methods of turning into a millionaire employing Bitcoin electronic currency, this is for academic use. 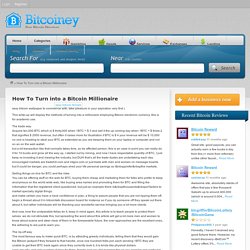 Selling things on-line for BTC and the risksYou can be offering stuff on the web for BTC, buying them cheap and marketing them for folks who prefer to keep anonymous on the world wide web, like buying area names and promoting them for BTC and filling the information that the registered client questioned, but just an example there is&nbspthousands&nbspof factors to market specially digital things.and make certain you have a have confidence in plan, a thing to assure people that you are not ripping them off, begin a thread about it in bitcointalk discussion board for instance so if you rip someone off they speak out there about it, but rather individuals will be thanking your wonderful service bringing you a lot more clients.

The latest offering comes from a Dubai-based bitcoin startup Umbrellab, which has launched its product Piiko to assist the company in its long-term objectives. Piiko is a mobile-phone prepay top-up service that currently caters to people across 100 countries including large economies like the US, UK, Brazil, and China. Take My Bitcoins: First Online Bitcoin Game Show. Take My Bitcoins. Game on! “Take My Bitcoins!” brings bitcoin to the game show universe.

Take My Bitcoins! Logo One of the best things about innovation is that you get to make up your own rules. In Mike Rotman’s case, creating a streaming, bitcoin-themed game show meant that he didn’t have to worry about pitching his idea to a network. Instead of running the gauntlet of TV industry gatekeepers, Rotman and his team simply bought a few cameras, built a simple studio set in a garage, and got to work turning their concept into a reality. Fittingly, the company calls itself Streamin’ Garage. On April 3, after mere weeks of prep time, that concept had become a reality. BitLendingClub to Take On Trillion Dollar Loans Market, Encouraging ‘Good Borrowers’ Cross-border peer-to-peer (P2P) bitcoin lending platform BitLendingClub, is looking to disrupt the growing lending industry with a unique model that should oust bad players while providing a better framework for "good borrowers.

" The Bulgaria-based startup integrated with the Boost VC accelerator program in February, and is looking forward to demo day on May 7, where the team will be presenting its product to an audience filled with influential VCs and industry leaders. Speaking with CoinTelegraph, co-founder and CEO Kiril Gantchev, shared his excitement to be one of the 25 startups selected to integrate Boost VC's Tribe 5, as well as his ambition to provide greater efficiency to a trillion dollar market that is ripe for innovation. The right incentive BitLendingClub, which works under a 'Dutch auction' system that consists in letting borrowers choose the interest rate that matches their requirements, charges fees from loans that have been repaid. The next catalyst. FairShareLoans. News Bits on BTC.com. Hunt for Satoshi Nakamoto Comic is Released -Bitcoinist. “Bitcoin: The Hunt for Satoshi Nakamoto,” a graphic novel, has been launched this Thursday in Madrid. Written by Alex Preukschat and Josep Busquet and illustrated by José Ángel García Ares, The Hunt for Satoshi Nakamoto tries to present and join together the action, facts, and fictions of the whole story behind the disruptive Bitcoin technology, its anarchic cypherpunk culture and its mysterious roots.

The mystery of Bitcoin’s creator provides the perfect plot for the fantastic comic book adventure, “Bitcoin: The Hunt for Satoshi Nakamoto.” This comic book takes the reader on an adventure through an underground filled with criminals, hackers and secret services. Fundraising for The Hunt for Satoshi Nakamoto and the Community made it possible The team tried to gather support through a Fundraising campaign and the Hunt for Satoshi Nakamoto crowd sale reached people in more than 30 countries around the world and has collected an estimated value of $20,000 USD. About the authors. Decentral: Buy and Sell Bitcoin at Toronto's Bitcoin ATM. Bitcoin QR Code Generator. CryptoPlace's BTC Faucet Rotator and Timer! Start - Devtome. Running_a_bitcoin_faucet - Devtome. If you are interested in taking part in running a Bitcoin faucet, there is a lot you need to know first.

It is not the get rich scheme that a lot of people think it is, and there is a lot of time that has to be spent perfecting things and dealing with ongoing development in order to keep the site up and running. On top of this, you have to be willing to pay out some Bitcoins (even in fractions), regardless of their current value. This article is set up with the goal of helping to explain what all goes in to the faucets, and what you need to know before getting involved. Coin.Mx - Buy Bitcoins with a Credit Card or Cash, Instantly! Best Bitcoin Faucet List 2015 - Bitcoin Faucet Relay. Biggest free Bitcoin / Dogecoin / Litecoin faucets list in the world may 2015. Coins 4 All - Earn more. Real-time Payments Systems & Processing. FreeUSD: The Innovative way to earn free USD and Bitcoin.