Do Not Fall Into the Trap of Just Solving Problems. (Clearwisdom.net) Over the past several years, I have been in the state of being "busy" in my work. 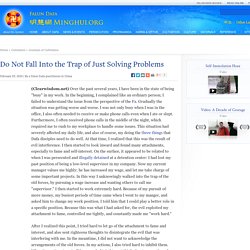 In the beginning, I complained like an ordinary person; I failed to understand the issue from the perspective of the Fa. Gradually the situation was getting worse and worse. Pureinsight - Creating Harmony - Part of Our Daily Discipline? [PureInsight.org] Lao Tze had this to say in "The Way of Life. 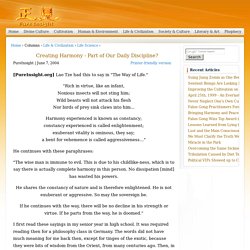 " "Rich in virtue, like an infant,Noxious insects will not sting him;Wild beasts will not attack his fleshNor birds of prey sink claws into him... Harmony experienced is known as constancy;constancy experienced is called enlightenment;exuberant vitality is ominous, they say;a bent for vehemence is called aggressiveness…" He continues with these paraphrases: "The wise man is immune to evil. This is due to his childlike-ness, which is to say there is actually complete harmony in this person. He shares the constancy of nature and is therefore enlightened.

If he continues with the way, there will be no decline in his strength or virtue. Pureinsight - Concerning Sleep and Time. [PureInsight.org] Each genuine Falun Dafa practitioner knows to seize the remaining time in the Fa-rectification period and do the three things that Master has asked us to do, studying the Fa, sending forth righteous thoughts and clarifying the truth. 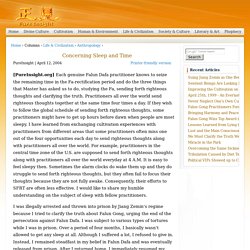 It is easy to feel sleepy then. Pureinsight - Reincarnation Series: A Nightmare from the Qin Dynasty. Discussions On “Time” from the Past. (Clearwisdom.net) An old saying about the preciousness of time goes like this, “A sage would not care for a foot-long piece of jade, but would value an inch of time.” 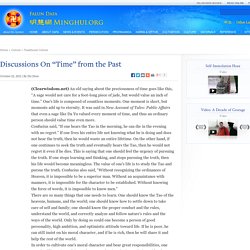 One's life is composed of countless moments. One moment is short, but moments add up to eternity. It was said in New Account of Tales: Public Affairs that even a sage like Da Yu valued every moment of time, and thus an ordinary person should value time even more. Confucius said, “If one hears the Tao in the morning, he can die in the evening with no regret.” If one lives his entire life not knowing what he is doing and does not hear the truth, then he would waste an entire lifetime. There are so many things that one needs to learn. Confucius and Socrates: The Courage to Stand on the Side of Truth. (Minghui.org) In the Analects of Confucius, Xianwen, Emperor of Northern Wei (454-476), described an emperor of the Chinese/Xianbei Dynasty Northern Wei, who responded to fundamental questions of law. 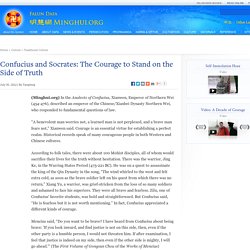 "A benevolent man worries not, a learned man is not perplexed, and a brave man fears not," Xianwen said. Courage is an essential virtue for establishing a perfect realm. Mencius Does Not Give Up Easily. (Clearwisdom.net) Mencius, a Chinese philosopher, advocated that a man of virtue should be benevolent in all his dealings. 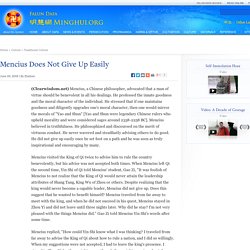 He professed the innate goodness and the moral character of the individual. He stressed that if one maintains goodness and diligently upgrades one's moral character, then one would mirror the morals of "Yao and Shun" [Yao and Shun were legendary Chinese rulers who upheld morality and were considered sages around 2358-2258 BC]. Mencius believed in truthfulness. He philosophized and discoursed on the merit of virtuous conduct.

Mencius Does Not Give Up Easily. The Power of Music. (Clearwisdom.net) The Chinese guqin (a plucked, seven-stringed instrument in the zither family), chess, calligraphy and painting are the four essential forms of art that a Chinese gentleman in ancient times was required to master. 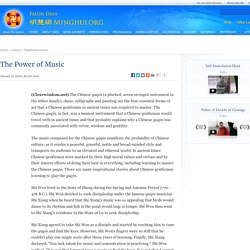 The Chinese guqin, in fact, was a musical instrument that a Chinese gentleman would travel with in ancient times and that probably explains why a Chinese guqin was commonly associated with virtue, wisdom and gentility. The music composed for the Chinese guqin manifests the profundity of Chinese culture, as it exudes a peaceful, graceful, noble and broad-minded style and transports its audience to an elevated and ethereal world. Cultivating in a Mountainous Area. (Minghui.org) I am a farmer from a mountainous area in Sichuan Province. 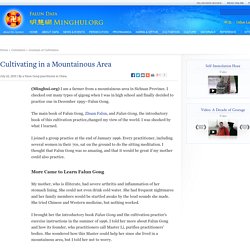 I checked out many types of qigong when I was in high school and finally decided to practice one in December 1995—Falun Gong. The main book of Falun Gong, Zhuan Falun, and Falun Gong, the introductory book of this cultivation practice,changed my view of the world. Student: From Low Grades to Being the Best. (Minghui.org) I began to practice Falun Dafa in 2011 while doing an internship at a factory. 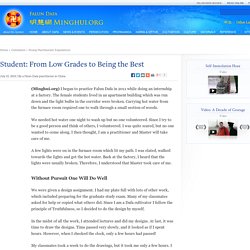 The female students lived in an apartment building which was run down and the light bulbs in the corridor were broken. Carrying hot water from the furnace room required one to walk through a small section of woods. We needed hot water one night to wash up but no one volunteered. Validating the Fa by What I Say and Do. (Minghui.org) I started practicing Falun Dafa in 2012. 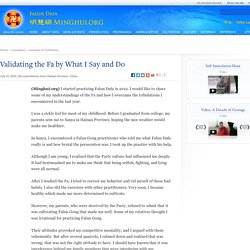 I would like to share some of my understandings of the Fa and how I overcame the tribulations I encountered in the last year. I was a sickly kid for most of my childhood. Before I graduated from college, my parents sent me to Sanya in Hainan Province, hoping the nice weather would make me healthier. A 104-Year-Old Falun Gong Practitioner.

(Minghui.org) I am 104 years old this year. I am healthy and happy. My gray hair is black again, my mind is clear, and my memory is as good as a young person's. Everyone says that I don't look like a day over 80. Dafa Tempered Me to What I Am Today. (Minghui.org) I began to truly practice Falun Dafa in March 2009. Although I have stumbled during the past five years, I continue to improve on my cultivation path. Profound Principles A colleague gave me the Falun Dafa introductory book in April 1995, and I read it once or twice during the next couple of years. I thought at the time that this cultivation practice was no more than any other qigong school, just for healing illnesses.

Falun Dafa came to my mind again in 2009 because I was bothered by several ailments. With a Dafa Disciple in the Family, Everyone Improves. (Minghui.org) As soon as I started practicing Falun Dafa in January 2003, I experienced amazing improvements in my mind and body. Some of my friends said that they knew of many women who were married to wealthy men but were not happy. They said our family was different, because we were very happy. Another friend of mine commented, “Your husband treats you well and provides you with whatever you need.” My husband is a senior manager. Falun Dafa Helped Me to Better Understand Christianity. Hi, my name is Joe Payne, and I am from the Chicago area.

I am 35 years old, a software consultant, and I have a wife and 3 children. Podcast (Cultivation): “Returning to Dafa and Understanding the Meaning of Life” Enjoying Endless Happiness While Suffering Hardship. (Minghui.org) I obtained the Fa at the end of 1998. After the persecution began, my husband opposed my practicing, so I had to do it at home secretly. I wanted to practice to cure my ailments, such as rheumatoid arthritis. I also recognized the value of Truthfulness-Compassion-Forbearance, and didn't want to give up the practice. In 2008, when I was listening to Master's lecture, I heard the word “cultivation.” It stood out and was imprinted in my mind. Letting Go of My Fundamental Attachment and Truly Cultivating.

Pureinsight - Some Lessons from My Mother. Pureinsight - On Eating, Sleep and Desire. Pureinsight - Emotions. "Strong emotions wreak havoc with our physical and emotional well-being and are able to cause mental illness," so the medical profession has warned us for years. Emotions cause strife, can lead to the break-up of relationships, are the reason for feuds and even wars. Pureinsight - On Ghosts. [PureInsight.org] I have a friend whose celestial eye is open.

Once this friend asked me, “Do you think that an alcoholic person really likes to drink?” Pureinsight - Three Poems. Seen in Another Dimension: Only One Thread Remains. (Minghui.org) Fa-rectification is pushing forward rapidly towards the final dimensions, and drawing near the human dimension. Memories of Revered Master's Three Lecture Tours in Australia.

New Book: Our Teacher. 6th Internet Experience Sharing Conference of China - Clearwisdom.Net. Mid-USA Fa Conference Held in Chicago (Photos) The Happiness of My Rebirth. Truth Clarification Phone Calls from Fellow Practitioners Overseas Are Effective in Suppressing the Evil. Every Step Leaves a Lotus: Cultivation Experiences in My Home Environment. Young Practitioners Should Take a Righteous Path. Overcoming Tribulations and Assisting Master through Understanding the Fa. Cultivate Well in Daily Life. We Can Accomplish Anything as Long as We Have Righteous Thoughts. I Am Here to Save the Lives of Others. Finding Attachments by Looking Inward and Examining My Mind and Thoughts. Disintegrate the Evil, Wake Up before Being Persecuted. My Understanding of "Divine Powers" My Daughter's Leukemia Disappeared When I Treated Tribulations with Righteous Thoughts and She Began to Practice Falun Gong.

Only By Believing in Master and the Fa Can We Have the Heart to Save Sentient Beings. Shijie. Flash-08. Lessons Learned from Failing to Attend Group Fa Study. Pureinsight - Experiences of Two Cases of Serious Sickness Karma.