Nikola Tesla's Great Inventions. In 1884, at the dawn of the electrical age, a slender, well-dressed young man stepped off a ship in New York with only four cents in his pocket. 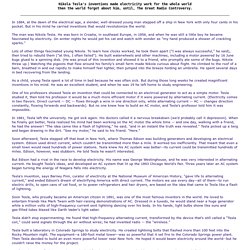 But in his mind he carried inventions that would revolutionize the world. Nikola Tesla Biography. Nikola Tesla was one of the foremost inventors of our time, but he was discredited during his lifetime, and probably has not received the recognition which rightfully belongs to him. 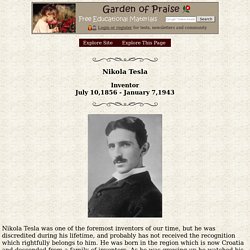 He was born in the region which is now Croatia and descended from a family of inventors. As he was growing up he watched his mother invent things to make her work easier. From the time he was a boy he had an ability to "see" things that would come into his mind. He said they were not hallucinations, and it was hard for him to distinguish between an actual object and an object his mind produced. Sometimes the images were accompanied by flashes of light and were so vivid and so real he could manipulate them to the extent that he could make an invention and refine and change it before he ever put it down on paper. 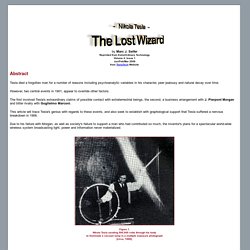 Seifer Reprinted from ExtraOrdinary Technology Volume 4, Issue 1 Jan/Feb/Mar 2006 from TeslaTech Website Abstract Tesla died a forgotten man for a number of reasons including psychoanalytic variables in his character, peer jealousy and natural decay over time. However, two central events in 1901, appear to override other factors. The first involved Tesla's extraordinary claims of possible contact with extraterrestrial beings, the second, a business arrangement with J. This article will trace Tesla's genius with regards to these events, and also seek to establish with graphological support that Tesla suffered a nervous breakdown in 1906. Due to his failure with Morgan, as well as society's failure to support a man who had contributed so much, the inventor's plans for a spectacular world-wide wireless system broadcasting light, power and information never materialized.

Figure 1. My Inventions - The Autobiography of Nikola Tesla. From Chaozation23 Website Introduction Nikola Tesla was born in Croatia (then part of Austria-Hungary) on July 9, 1856, and died January 7, 1943. 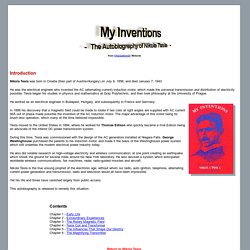 He was the electrical engineer who invented the AC (alternating current) induction motor, which made the universal transmission and distribution of electricity possible. Tesla began his studies in physics and mathematics at Graz Polytechnic, and then took philosophy at the University of Prague. He worked as an electrical engineer in Budapest, Hungary, and subsequently in France and Germany. In 1888 his discovery that a magnetic field could be made to rotate if two coils at right angles are supplied with AC current 90Á out of phase made possible the invention of the AC induction motor.

Tesla moved to the United States in 1884, where he worked for Thomas Edison who quickly became a rival Edison being an advocate of the inferior DC power transmission system. Nikola Tesla: The Inventor Genius Who Irrevocably Changed The World - Yellow Magpie. [adsense] A thin, immaculately dressed man makes his way through New York. 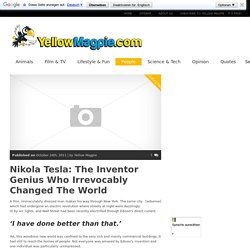 The same city which had undergone an electric revolution where streets at night were dazzlingly lit by arc lights, and Wall Street had been recently electrified through Edison’s direct current. ‘I have done better than that.’ Yet, this wondrous new world was confined to the very rich and mainly commercial buildings. It had still to reach the homes of people. The sharp-suited, rather withdrawn man worked long hours day and night in a workshop landscape that would have terrified the uninformed. A Transformational Force Of Nature Changing the course of human history is something very few individuals can claim.

Fewer people manage to transform human actively in a solely positive way. Early Years. Uk.businessinsider. From Eric Weisstein's World of Scientific Biography. Eccentric Serbian-American engineer who made many contributions to the invention of electromagnetic devices. 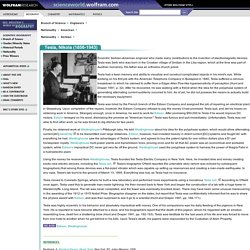 The Psychology of Edgar Allan Poe - Neuroskeptic. Nikola tesla. Internet Resources I was about seventeen, when my thoughts turned seriously to invention. 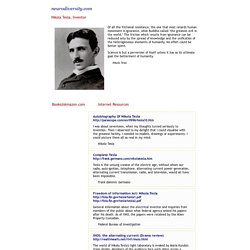 Then I observed to my delight that i could visualise with the greatest facility. I needed no models, drawings or experiments. I could picture them all as real in my mind. Tesla is the unsung creator of the electric age, without whom our radio, auto ignition, telephone, alternating current power generation, alternating current transmission, radio, and television, would all have been impossible. General information about the electrical inventor and inquiries from members of the public about what federal agency seized his papers after his death. The Eccentric Mind of Nikola Tesla. Electricity is something we take for granted every day. 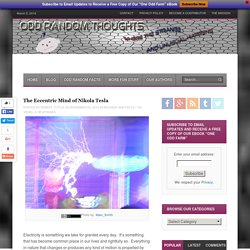 Nikola Tesla. Nikola Tesla Pretty much everybody even remotely associated with real-time strategy games has heard the name Tesla before – the Serbian God of Lightning's omnipresent, ever-zapping coils have been ruining the lives of digital Allied soldiers and gibbing U.S. war machines into spare parts since the release of Command & Conquer: Red Alert in 1996 – but surprisingly few people these days are familiar with the life and times of one of humankind's most eccentric, badass, and volumetrically-insane scientific super-geniuses. 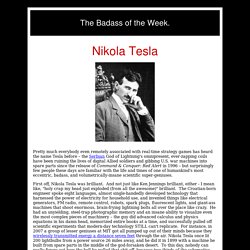 First off, Nikola Tesla was brilliant. And not just like Ken Jennings brilliant, either - I mean like, "holy crap my head just exploded (from all the awesome)" brilliant. Why was Nikola Tesla considered eccentric or odd? - Quora.