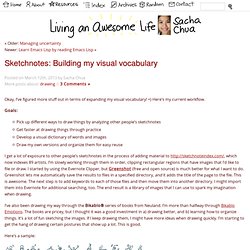 =) Here’s my current workflow. Goals: Pick up different ways to draw things by analyzing other people’s sketchnotesGet faster at drawing things through practiceDevelop a visual dictionary of words and imagesDraw my own versions and organize them for easy reuse I get a lot of exposure to other people’s sketchnotes in the process of adding material to which now indexes 89 artists. I’m slowly working through them in order, clipping rectangular regions that have images that I’d like to file or draw. I’ve also been drawing my way through the Bikablo® series of books from Neuland. Here’s a sample: I’m looking forward to finishing that and the Bikablo v2 book, filing the individual sketches, and then going through my visual library of other people’s sketchnote elements to draw even more of those… Lots of things to draw! Visual recording on the iPad, illustrated – Ninmah Meets World. This week I’ll be giving a talk at IFVP 2010 on visual recording with the iPad. 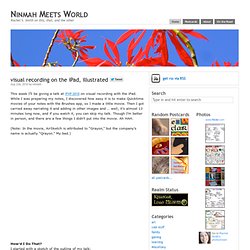 While I was preparing my notes, I discovered how easy it is to make Quicktime movies of your notes with the Brushes app, so I made a little movie. Then I got carried away narrating it and adding in other images and … well, it’s almost 13 minutes long now, and if you watch it, you can skip my talk. Though I’m better in person, and there are a few things I didn’t put into the movie. Ah HAH. (Note: In the movie, AirSketch is attributed to “Grayon,” but the company’s name is actually “Qrayon.”

How’d I Do That? Initial sketch for my talk While making the outline, I tried four different apps (Adobe Ideas, Qrayon’s AirSketch, Brushes by Taptrix, and Autodesk SketchbookPro). Next, I transcribed my notes using Brushes, which automatically records the strokes as you go. While watching the animation play out in Brushes, I recorded the narration using Audacity. Learning to sketchnote. Sketchnoting is the act of drawing to convey ideas. 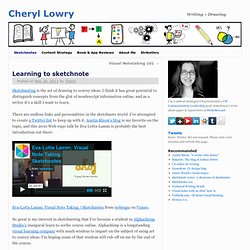 I think it has great potential to distinguish concepts from the glut of nondescript information online, and as a writer it’s a skill I want to learn. There are endless links and personalities in the sketchnote world. I’ve attempted to create a Twitter list to keep up with it. Austin Kleon’s blog is my favorite on the topic, and this 2010 Web expo talk by Eva Lotta-Lamm is probably the best introduction out there: Eva-Lotta Lamm: Visual Note Taking / Sketchnotes from webexpo on Vimeo. So great is my interest in sketchnoting that I’ve become a student in Alphachimp Studio’s inaugural learn to scribe course online. Here’s my first assignment, a ‘visual introduction’ of myself that’s supposed to answer a few personal questions (such as my greatest fear, one of which is dying in a burning DC10 over open water). Visual Note-Taking 101 from SXSW 2010. Sketcho Frenzy: The Basics of Visual Note-taking.

Let's Sketchnote — MidwestUX 2012. Bryn Price, Enterprise architect at Open text. Speaking. Fast Company named Sunni one of the 100 Most Creative People in Business because of her advocacy of visual and game literacy (and because, like a true creative, she sometimes wears a bathrobe to work). 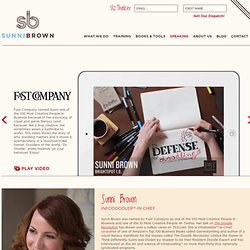 This video shows the story of why doodling matters and it shows it, appropriately, in a storyboard-like format. Doodlers of the world, “Dr. Doodle” works tirelessly on your behalves. Enjoy! This talk called “Doodlers, Unite!” Sunni Brown Sunni Brown was named by Fast Company as one of the 100 Most Creative People in Business and one of the 10 Most Creative People on Twitter. Sunni presents at a wide range of domestic and international events–all presentations are interactive and based on thinking games with the audience! Sunni has minimal training in art or drawing and thinks like a non-artist, appealing to people who don’t necessarily identify with or haven’t been exposed to the whole-mind-whole-body approach to learning.