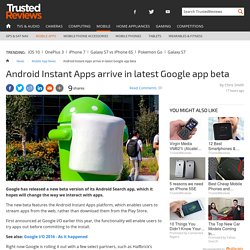 The new beta features the Android Instant Apps platform, which enables users to stream apps from the web, rather than download them from the Play Store. First announced at Google I/O earlier this year, the functionality will enable users to try apps out before committing to the install. See also: Google I/O 2016 - As it happened Right now Google is rolling it out with a few select partners, such as Halfbrick’s classic slasher Fruit Ninja. Currently it offers users a demo of the app, which is relatively unstable, but in the future Google plans to roll out full functionality.

Users simply need to search the web for an app of their choosing and those featuring a Try Now label are available for streaming. The idea is geared towards supporting Google’s mobile ads business. You can see a little preview of the app streaming in the video (via 9to5Google) below. Cyber-Five Internet Safety. ABCya is the leader in free educational computer games and mobile apps for kids. 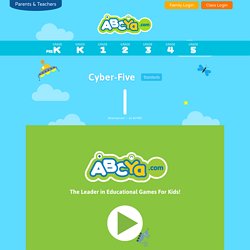 The innovation of a grade school teacher, ABCya is an award-winning destination for elementary students that offers hundreds of fun, engaging learning activities. Millions of kids, parents, and teachers visit ABCya.com each month, playing over 1 billion games last year. Apple, The New York Times, USA Today, Parents Magazine and Scholastic, to name just a few, have featured ABCya’s popular educational games. ABCya’s award-winning Preschool computer games and apps are conceived and realized under the direction of a certified technology education teacher, and have been trusted by parents and teachers for ten years.

A Different way to do Long Division. Tools for Professional Learning: Curate, Share, Connect. For six years, I taught in a basement classroom with no windows, and yet I could see what was happening around the world thanks to the Internet. 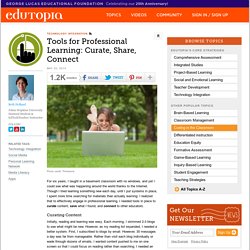 Though I tried learning something new each day, until I put systems in place, I spent more time searching for materials than actually learning. I realized that to effectively engage in professional learning, I needed tools in place to curate content, save what I found, and connect to other educators. Curating Content Initially, reading and learning was easy. Each morning, I skimmed 2-3 blogs to see what might be new. NetNewsWire (Mac Only) When I first installed this program, my reading world exploded. Flipboard (iOS or Android) Android Instant Apps arrive in latest Google app beta. Android Marshmallow adoption passes 15% after 10 months. Android Nougat may be just around the corner, but everyone is still watching Android Marshmallow slowly grow. 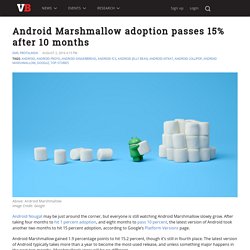 After taking four months to hit 1 percent adoption, and eight months to pass 10 percent, the latest version of Android took another two months to hit 15 percent adoption, according to Google’s Platform Versions page. Android Marshmallow gained 1.9 percentage points to hit 15.2 percent, though it’s still in fourth place. The latest version of Android typically takes more than a year to become the most-used release, and unless something major happens in the next two months, Marshmallow’s story will be no different. Here are the changes between July and August: The Platform Versions tool uses data gathered from the Google Play Store app, which requires Android 2.2 and above. For the sake of comparison, here’s the Android adoption chart for July: Choosing A Responsive Image Solution.

Advertisement If you code websites, it’s a good bet that at least one of your clients has asked about or requested a mobile-friendly website. 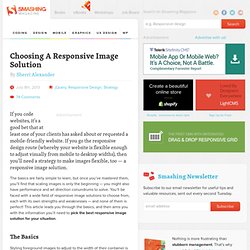 If you go the responsive design route (whereby your website is flexible enough to adjust visually from mobile to desktop widths), then you’ll need a strategy to make images flexible, too — a responsive image solution. The basics are fairly simple to learn, but once you’ve mastered them, you’ll find that scaling images is only the beginning — you might also have performance and art direction conundrums to solve. You’ll be faced with a wide field of responsive image solutions to choose from, each with its own strengths and weaknesses — and none of them is perfect! This article leads you through the basics, and then arms you with the information you’ll need to pick the best responsive image solution for your situation.

The Basics Styling foreground images to adjust to the width of their container is very easy.