Cornered by Mike Baldwin for Nov 23, 2011. INSIDE GET SMART. Random Facts ← FACTSlides → Amazing FACTS you didn't know! You're Getting Old! Amazing and Interesting Facts Generator. On November 18th, 1913, pilot Lincoln Beachy did something that had never been done in an airplane before: he made a complete loop-de-loop. 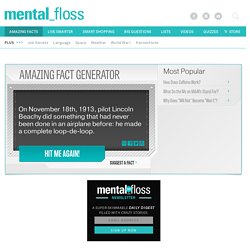 Submitted by Stephen Carroll - Nashua,New Hampshire James Baskett, who played Uncle Remus in Disney's film Song of the South, was not able to attend the film's premiere in Atlanta, Georgia; at the time it was a racially segregated city. In 1946, Ed Waldmire, Jr., revolutionized the meat-on-a-stick world when he debuted the Cozy Dog—the first corn dog on a stick. He had wanted to name his creation the “Crusty Cur,” but his wife convinced him that people wouldn’t want to eat something described as “crusty.” Share Book Recommendations With Your Friends, Join Book Clubs, Answer Trivia. Highlight web with Marker.to - best marker, highlighter, annotator! Marker.to is a simple annotation tool. 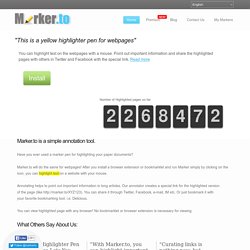 Have you ever used a marker pen for highlighting your paper documents? Marker.to will do the same for webpages! After you install a browser extension or bookmarklet and run Marker simply by clicking on the icon, you can highlight text on a website with your mouse. Annotating helps to point out important information in long articles.

Our annotator creates a special link for the highlighted version of the page (like You can share it through Twitter, Facebook, e-mail, IM etc. 99 Tech Life Hacks You Should Know. A life hack is a strategy, technique, trick or shortcut that can help make life easier – by speeding up efficiency, enhancing productivity and sometimes minimizing a source of annoyance with a quick trick. 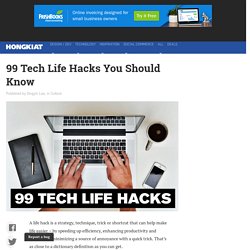 That’s as close to a dictionary definition as you can get. Love them or hate them, life hacks have become so engrained in our online lives that there are sites and videos dedicated to sharing these hacks (or debunking them). ASL Dictionary. Top 5 - Can't Stop Laughing Moments On TV - Compilation. Top 10 Game Show Fails of All Time. Top 10 Funniest Music Videos. World of Warships—massive naval clashes. Take command of legendary vessels from the early 20th century and fight for domination on the high seas. Sporcle - Trivia, Quizzes & Brain Games.