Chicken and Sweet Corn Soup. While I was on vacation I got the chance to eat at a Chinese restaurant and the chicken sweet corn soup on the menu caught my attention. 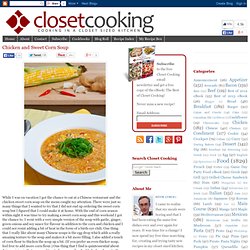 There were just so many things that I wanted to try that I did not end up ordering the sweet corn soup but I figured that I could make it at home. With the end of corn season within sight it was time to try making a sweet corn soup and this weekend I got the chance to. I went with a very simple version of the soup with garlic, ginger, green onions and soy sauce for flavour in addition to the corn and chicken and I could not resist adding a bit of heat in the form of a birds eye chili. One thing that I really like about many Chinese soups is the egg drop which adds a really amazing texture to the soup and makes it a bit more filling. Creamy Tomato Soup.

Creamy tomato soup is a favorite of mine. 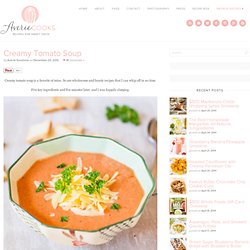 So are wholesome and hearty recipes that I can whip off in no time. Five key ingredients and five minutes later, and I was happily slurping. The recipe is inspired by Panera Bread’s Vegetarian Creamy Tomato Soup. Their philosophy centers around Good Goes In. Good and wholesome ingredients going in, good and wholesome soup going out. Guinness French Onion Soup. French onion soup has to be one of my favourite winter comfort soups and with St Patrick's Day coming I thought I would try making it with an Irish twist. 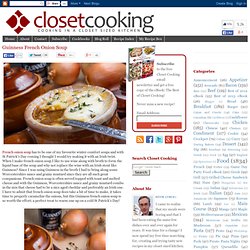 When I make french onion soup I like to use wine along with broth to form the liquid base of the soup and why not replace the wine with an Irish stout like Guinness? Since I was using Guinness in the broth I had to bring along some Worcestershire sauce and grainy mustard since they are all such great companions. French onion soup is often served topped with toast and melted cheese and with the Guinness, Worcestershire sauce and grainy mustard combo in the mix that cheese had to be a nice aged cheddar and preferably an Irish one.

I have to admit that french onion soup does take a bit of time to make, it takes time to properly caramelize the onions, but this Guinness french onion soup is so worth the effort; a perfect treat to warm one up on a cold St Patrick's Day! Just look at all of that irresistible melted cheddar! Printable Recipe. Creole Split Pea Soup. Avgolemono Soup Recipe. Please welcome Hank Shaw as he shares his quick and easy version of the Greek classic avgolemono soup, a chicken soup with lemon and egg. 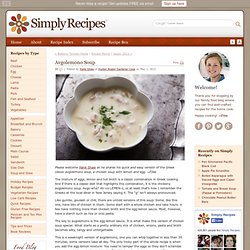 ~Elise The mixture of eggs, lemon and hot broth is a classic combination in Greek cooking. And if there is a classic dish that highlights this combination, it is the chickeny avgolemono soup. Avgo-wha? Ah-vo-LEMEN-o, or at least that’s how I remember the Greeks at the local diner in New Jersey saying it. Like gumbo, goulash or chili, there are untold versions of this soup. The key to avgolemono is the egg-lemon sauce. This is a weeknight version of avgolemono, one you can whip together in less than 30 minutes; some versions take all day. One thing about this soup: Never let it boil once you’ve added the egg-lemon mixture. Either rice or orzo pasta are fine here, so use whichever you prefer. Ingredients Method 1 Heat the olive oil in a medium pot and saute the onions over medium-high heat until they are soft and translucent, 4-5 minutes. Roasted Tomato Soup. In fall when the weather starts cooling down, soups are once again on the menu and as far as soups go it is hard to beat the simplicity of a good old fashioned tomato soup. 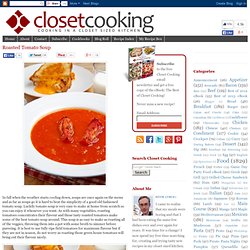 Luckily tomato soup is very easy to make at home from scratch so you can enjoy it whenever you want. As with many vegetables, roasting tomatoes concentrates their flavour and those tasty roasted tomatoes make some of the best tomato soup around. This soup is as easy to make as roasting all of the veggies, throwing them into a pot with some broth to simmer before pureeing. It is best to use fully ripe field tomatoes for maximum flavour but if they are not in season, do not worry as roasting those green house tomatoes will bring out their flavour nicely. You can serve your tomato soup plain but it is always nice to garnish it with something like croutons, feta, blue cheese, a dollop of basil pesto or even sour cream. Cream of Mushroom Soup.

Black Bean and Roasted Pepper Soup. I still had a bunch of roasted red peppers in my freezer and I was thinking that it would be nice to get another hearty soup in before the weather warmed up too much more. 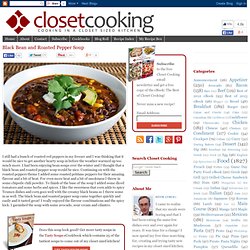 I had been enjoying bean soups over the winter and I thought that a black bean and roasted pepper soup would be nice. Continuing on with the roasted peppers theme I added some roasted poblano peppers for their amazing flavour and a bit of heat. For even more heat and a bit of smokiness I threw in some chipotle chili powder. To finish of the base of the soup I added some diced tomatoes and some herbs and spices. I like the sweetness that corn adds to spicy Texmex dishes and corn goes well with the creamy black beans so I threw some in as well. Broccoli, Lemon and Parmesan Soup Recipe.