I am Global Developer and Entrepreneurin Luxury Resorts and Residential Development. Owner and Developer at The Residences At The Ritz-Carlton, Grand Cayman Islands.

Harbour House showcases boats. Anyone who has even toyed with the idea of buying a boat will not want to miss out on the Annual Boat Show and Discount Day at Harbour House Marina. 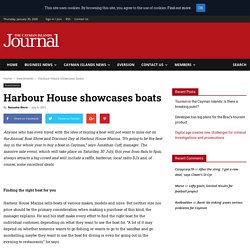 “It’s going to be the best day in the whole year to buy a boat in Cayman,” says Jonathan Cuff, manager. The massive sale event, which will take place on Saturday, 30 July, this year from 8am to 5pm, always attracts a big crowd and will include a raffle, barbecue, local radio DJs and, of course, some excellent deals. Finding the right boat for you Harbour House Marina sells boats of various makes, models and sizes. But neither size nor price should be the primary consideration when making a purchase of this kind, the manager explains.

Different boats are better suited to some activities than others, explains Cuff. Even people who have only a passing interest in purchasing a boat would do well to attend the event, as it will give them an opportunity to find out a little more in an informal setting and take a test ride or two. Ritz Carlton Grand Cayman Resort: Mike Ryan: The pioneer in the development of land. Mike Ryan had a huge role to play in realizing the potential of residential development. 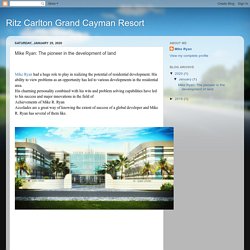 His ability to view problems as an opportunity has led to various developments in the residential area. His charming personality combined with his wits and problem solving capabilities have led to his success and major innovations in the field of Achievements of Mike R. Ryan Accolades are a great way of knowing the extent of success of a global developer and Mike R. International Property Awards: Best Residential Development in the Caribbean 2017-2018 Caribbean Property Awards:Best Residential Development Cayman Islands 2017-2018. · Luxury Travel Advisors Awards of Excellence:2009 – Best Luxury Family Resort in the World.

These are only some of the several rewards that Mike R. Charity work However, it is not all just for the show; Mike R. What he is doing right now? As for the present, Mike Ryan is working on office the building at 1 Portsoken Street, E1. Mike R. Developer Michael Ryan aims to bring Ritz-level luxury to residential market. Ritz-Carlton, Grand Cayman developer Michael Ryan has broken ground on his newest Cayman Islands project, an oceanfront condo development in George Town. 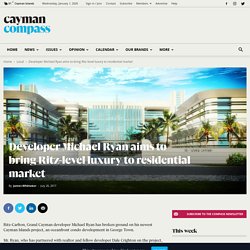 Mr. Ryan, who has partnered with realtor and fellow developer Dale Crighton on the project, said the development, Fin, aims to bring five-star resort-style elegance and amenities to the residential market. Following an “intense” two-year design and planning process, construction work began last week on what will be a four-story, 36-unit development on South Church Street. Around 60 percent of the units have been pre-sold and construction is expected to take two years to complete, with the first owners moving in around summer of 2019, according to the developer.

The development has some unique features, including a 75-foot elevated glass-bottomed pool, on the third floor, that cantilevers out over the beach. A salt-water lagoon will be carved into the ironshore and a new beach created overlooking the marine park. Mr. The Ritz-Carlton Grand Cayman Resort – Mike R. Ryan. Nearly fifteen years ago the potential of Seven Mile Beach was unleashed by creatively combining a prime waterfront site with land stretching across to the North Sound. 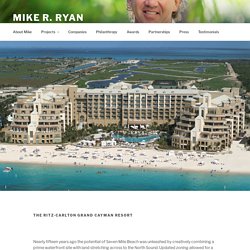 Like this: Like Loading... Mike Ryan: Owner and Developer at The Residences At The Ritz-Carlton, Grand Cayman Islands – Mike Ryan-Global Developer and Entrepreneur. Real estate world includes big money and even bigger minds. 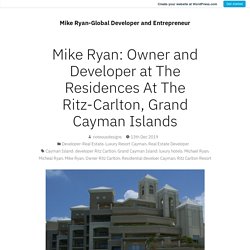 Mike Ryan is one of the pioneers in the world o real estate. Several of the designs now prominent in the world of real estate are his brain child. His expertise lies in his enigmatic personality along with the ability to think out of the box to get results that otherwise are unseen. His work has reached almost all continents in the world with projects in Canada, London, and Asia. He has worked on more than three million square feet of residential and commercial properties including hotels, resorts, and more. He was the first to understand the potential of luxury resorts including hotels and branded residential area working together to create an extremely unique experience. The real estate business has several pitfalls that a business owner may fall into and Michael Ryan is not different. His dedication to work and innovative mind have served him well over the years and continue to do so even today. Like this: